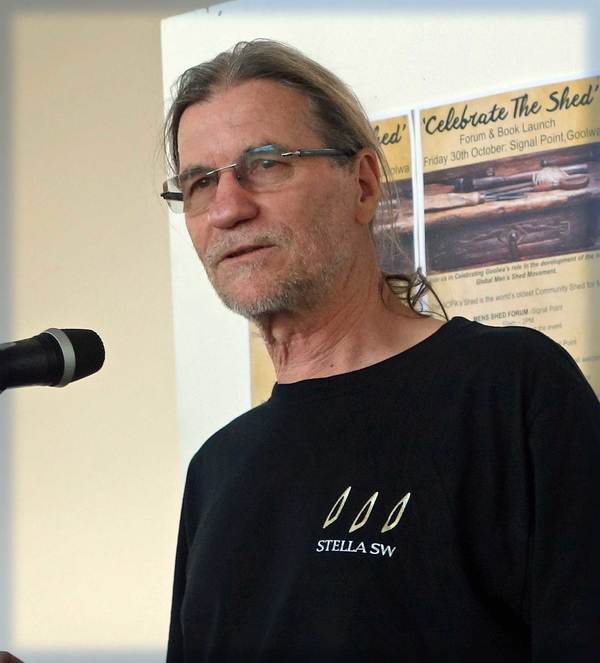 Professor Golding has spearheaded international research into a wide range of aspects of Men’s Sheds inclusive of health and wellbeing for the past two decades. He is an Honorary Patron of the Australian Men’s Shed Association (since 2009). He has published widely in the field of men’s sheds, informal learning, health and wellbeing. Aside from being the world’s leading researcher in the field of Men’s Sheds, he is also an international advocate and activist for Men’s Sheds.

Barry’s nationally researched 2007 book (with others), ‘Men’s Sheds in Australia: Learning through community contexts’ published through NCVER became a landmark and widely cited study. It was Barry’s words at the 2007 first AMSA Conference, ‘Men don’t talk face to face, they talk shoulder to shoulder’ that has been abbreviated and used as a slogan for Men’s Sheds movements worldwide.

Barry is author of two definitive books, ‘Men Learning through life’ (2013), published by NIACE in the UK, and’ The Men’s Shed Movement: The Company of Men’ published by Common Ground in the US.

In June 2016, Professor Golding was appointed to the Member of the Order of Australia (AM) in the Australian Queen’s Birthday Honours in recognition of his ‘significant contribution to tertiary education as a researcher and author, to professional organisations and to the community’.

Barry’s forthcoming 2021 book,’ Shoulder to Shoulder: Broadening the Men’s Shed Movemen’t is in press, also to published by Common Ground in the US. It includes seven separate chapters about Men’s Shed movements in Australia, the UK, Ireland, the US, Canada and Denmark. The new book contains 67 carefully research Men’s Shed case studies revisited from 2015, as well as 56 new (2021) case studies from all seven main shedding nations.

The new book includes a detailed account of the way COVID-19 impacted on the health and wellbeing of men, Sheds and communities around the world. The forthcoming book was researched with the cooperation of AMSA and most state-based Men’s Shed associations in Australia, UKMSA in the UK, SMSA in Scotland, Men’s Sheds Cymru in Wales, IMSA in Ireland, USMSA in the US, CMSA in Canada, and Mænds Mødesteder (‘Men’s meeting places)’ in Denmark through the Forum for Men’s Health.