Flying in and out of life, and back in again: Lachie Samuel’s story of survival

Lachie Samuel knows a thing or two about remote, casual work. The Fly-In-Fly-Out life (FIFO) and Drive-in-Drive-Out (DIDO) life sounded appealing when, as a 19-year-old in 2009 Lachie followed his brother out of Auckland to Kalgoorlie, 600ks from Perth.

“I jumped straight into it,” he says. “Scaffolding, rigging, trades assistant, any type of trade to do with mining and construction, I loved it but for the wrong reasons.

“I loved it because it was hard work and it made me feel like I was a man, like I was enough because I made a lot of money. I could get steroids whenever I wanted, free gym free food, free accommodation.”

But there was a downside.

“I didn’t like the way we were treated as workers, dismissed if we raised issues. I felt hugely insignificant as someone working there. The mindset and culture of the workers is ‘find anything to whinge about that you can.’

“Like when you are doing 28-day swings and you get off the plane and you have a sleep and wake up the next morning at 4am, get on the bus at 5.30am and you’ve got guys in your swing (roster) saying, ‘28 days to go man.’ You’re like, ‘shit, I don’t want to be reminded of this first thing in the morning.’ It’s a lot of negativity, a lot of complaining. That’s one of the reasons people are so highly distressed in the industry, because of that lack of ability to manage stress and that comes out as bitterness or resentment.” 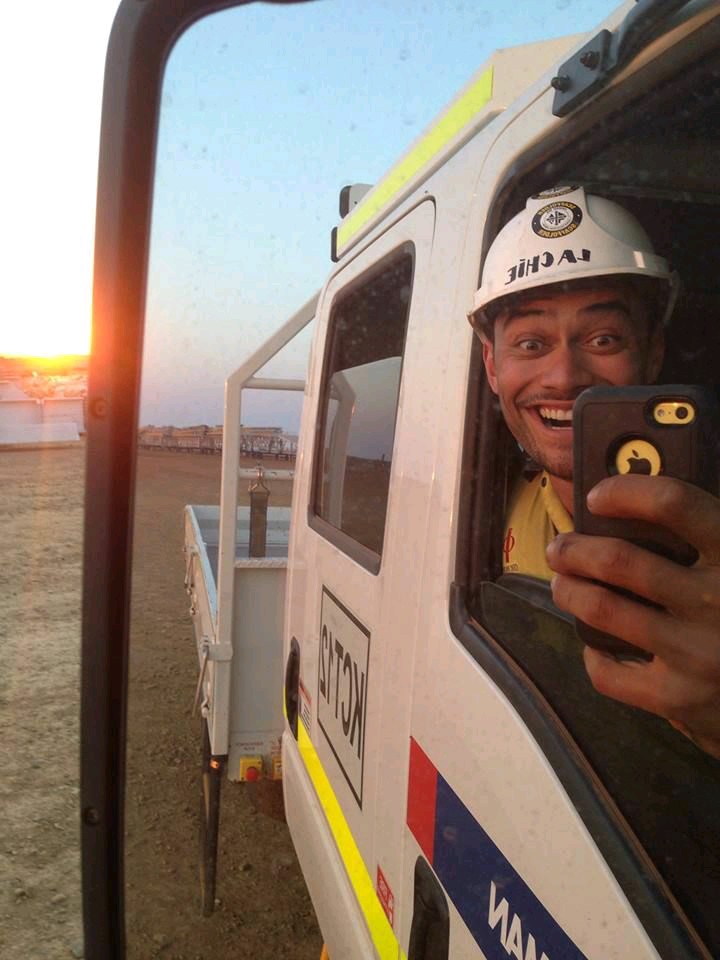 Lachie Samuel: returning to FIFO with a new outlook.

The way down, the way up

Four years later, Lachie found himself in a deep hole. He had moved to Perth with his girlfriend and was spending longer stints in the outback. Their relationship fell apart and Lachie, missing his only source of validation, spiralled into depression. He was forced to resign ‘because I fell into a state of not caring about anything’, and eventually attempted suicide.

When his ex told him she was pregnant, he rejected the prospect of becoming a father until the moment he saw his newborn and found a new purpose to his life. “Would she be ok never knowing what it was like to kiss or cuddle the man who gave her life?”

Over the next two years, Lachie immersed himself in meditation and personal development, eventually returning to FIFO with a new outlook.

But three months into his dream job, a colleague did take his life and Lachie lost his footing. There was little empathy among the contractors and workers at Wheatstone in the Pilbara for the tragedy. “They said he was a pussy, a faggot for doing it and I went back down into suicidality. I got evacuated and lost another friend not too long after being evacuated. This guy was by all accounts smiley, one of the happiest dudes I’d ever known. There was a lot of guilt attached to that too …”

Lachie had to find his own way up. During his first bout of suicidality, he just assumed he was a crap worker. “There was no awareness, no reaching out for help and no acknowledgement that I was struggling,” he says. No one picked up on it. No one noticed that he’d lost his normal happy vibe, and had become angry. It was more along the lines, ‘you’re really shit at the moment, pick your game up or we’ll have to let you go.'”

If he didn’t turn up to work, his supervisors would turn up to his room and give him a blasting. “No inquisition, no care, no ‘maybe there is something going on.’” 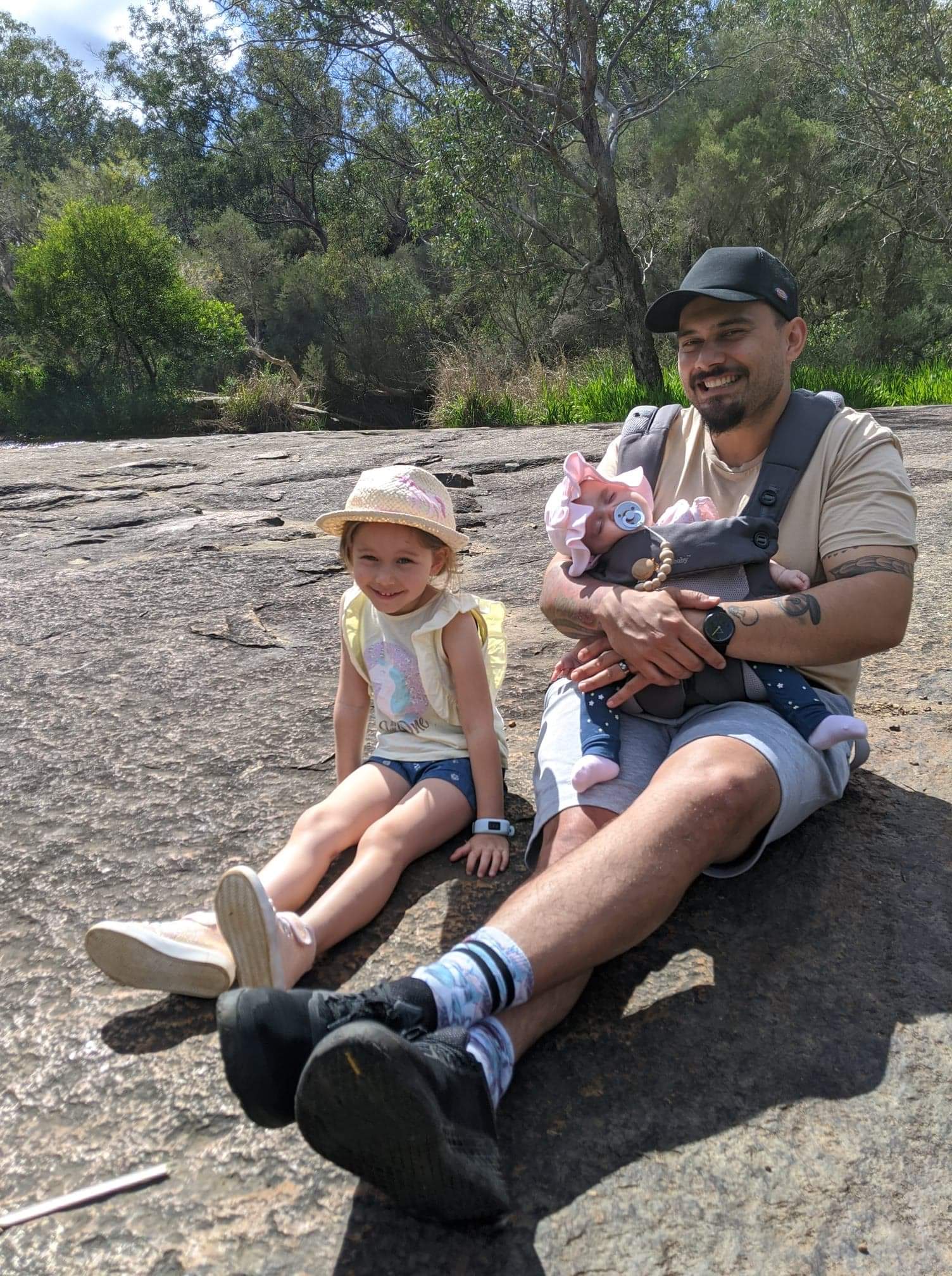 Embracing family and his role as a dad.

Yoga and meditation taught Lachie how to become aware of his thinking, and move from negative to positive self-talk. He bought a Deepak Chopra book from the airport on one swing and started with a basic 10-minute meditation practice. “I pretty much lent on that for the next couple of months.”

Like the fictionalised TV crime boss Tony Soprano portrayed by the late James Gandolfini, Lachie hid his reliance on self-help therapies and psychological exploration. “It wasn’t really accepted. It was all about looking good, going to the gym and being one of the boys. 41% of FIFO workers worry about stigma around mental health.”

On his second go-around at Wheatstone, Lachie’s colleagues were more tolerant of his interest in esoteric material, and he openly read books like The Way of the Peaceful Warrior by Dan Millman.

Lachie is now a valued resource for the mining and construction industry, looking to the former FIFO worker to understand, address and reduce the high levels of male suicide and mental health issues impacting so many of its workforce.

His three-year-old podcast – Open Up with Lachie Samuel – has become a top 10 mental health podcast. He is a keynote speaker on behalf of the Mental Health Foundation of Australia, and organiser of the FIFO Mental Health Summit, a forum to help companies create a plan for FIFO Mental Health and Happiness over the next three years.

In October, he was a keynote speaker at the National Symposium on Miner’s Mental Health at the Perth Convention and Exhibition Centre, hosted by Mental Health Foundation Australia.

He has developed a free vulnerability course, and offers one-one-one sessions for men to ‘awaken’ and ‘re-ignite’ their lives, and to confront their destructive patterns.

The content of his life work has evolved from his life experience, and discovering that he had covered over some traumatic moments in his life, including sexual abuse. “It’s been organic and unintentional,” he says. “I started the podcast as a way to help guys like me who are isolated and ashamed of mental health. It was something they could listen to without anyone knowing they were listening.”

In 2019, Lachie put a video up on LinkedIN calling for mining reps to get together in one room. The response was strong, and led to the creation of the FIFO Mental Health Summit in Perth and Brisbane, and on-going demand for Lachie’s services.

He says that, while there is more focus on men’s mental health in the mining and construction industry, it comes with a hesitancy and concern that blokes will starting rorting the system, ‘like they do with worker’s comp’ for physical injuries. “They want it, but it takes time. It took us five months to get into Woodside and a year to get into Rio Tinto. They really need to test you and test you and test you, and figure what they want as well.”

Ahead of International Men’s Day 2020, Lachie shared his thoughts on what it is to be a man. This is what he had to say:

“At the moment the issue is men acting from wounding, be it a childhood trauma, or trauma compounded over time. Acting from that place and being unaware that they have suppressed whatever they felt in that moment and created a story and a belief, that influences the way they behave.

“If we can create awareness around why we behave the way we do or why we are thinking the way we are thinking, at least we can look back, identify those moments, unpack it, process the emotion and we’re not going to be acting from that place of lack, or scarcity or fear. ‘Cos that’s essentially what toxic masculinity is: Reacting over Responding. Reacting coming from a place of wounding rather than responding coming from a place of, ‘I hear you, I see you, but this is my response.’”

“To be a powerful man is to understand, be aware of and accept all parts of yourself without shunning or suppressing. Surrendering to what has been, what currently is and what will be as well as understanding the primal nature of being a man, especially expressing anger and being able to communicate to the people you love so they understand that’s not an aggressive act, it’s your innate way of expressing that emotion.”

READ: WHAT ARE THE MASCULINE TRAITS YOU MOST ADMIRE IN MEN: A WARRIOR'S STORY