Two outstanding Tasmanian leaders in men’s health have been nominated for one of the state’s LIFE Awards for Suicide Prevention.

Yesterday’s Federal Budget did not address the needs of those most at-risk of suicide, including men, according to Suicide Prevention Australia (SPA), the peak body for the suicide prevention sector.

A new end-of-year report released by the OzHelp Foundation called It’s tough out there highlights evidence that workers in male-dominated, high-risk industries remain at a higher risk of mental health issues and suicide.

Suicide kills 9 people a day, 7 men and 2 women. Closing the gap between male suicide and female suicide would save nearly 1,700 lives a year.

Send A Message: Save Aussie Men

We invite you to join this campaign by writing a message of support to the Prime Minister (see right).

Over 75% of suicides are men, but the majority of suicide prevention services the Government funds are shown to largely address female suicide risk factors.

Suicide prevention strategies in Australia don't take into account the differences between men's and women's experiences of suicide.

They don’t account for the fact that male suicides are more often linked to relationship problems, money issues, job loss and alcohol abuse.

You can help Save Aussie Men by asking the Government to do more to tackle male suicide.

“The Government has set itself the ambitious target of working towards a zero suicide goal," said AMHF CEO, Glen Poole.

"Tackling male suicide with a targeted strategy and funding would go further than any other approach to achieving this goal." 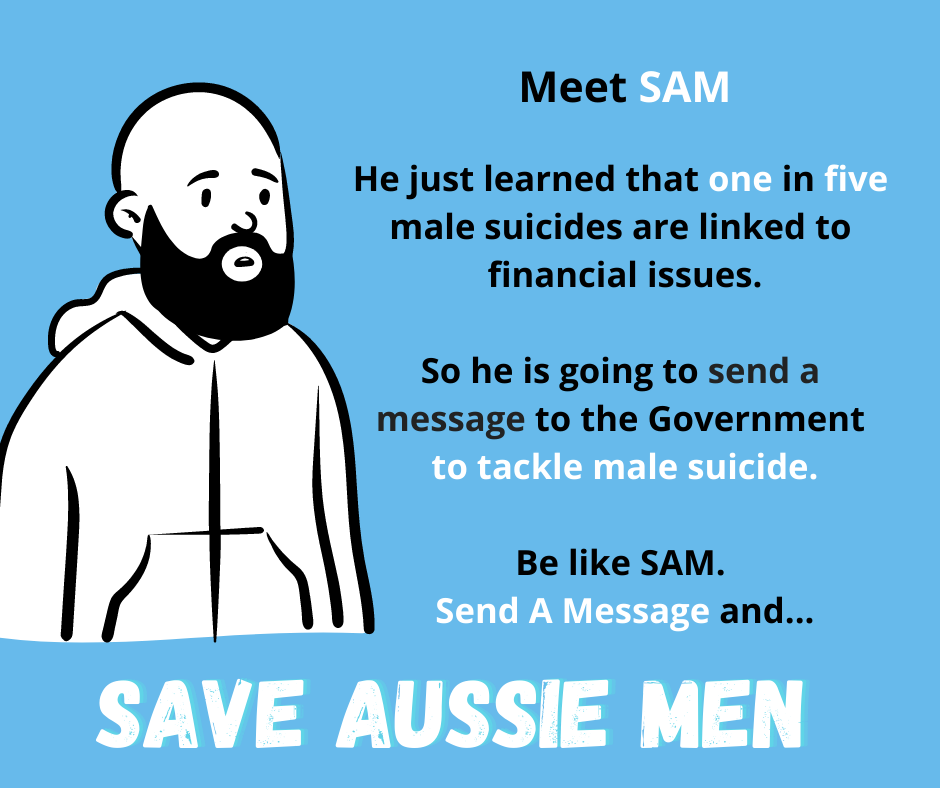 The Prime Minister’s National Suicide Prevention Advisor Christine Morgan has called for all Governments in Australia to fund and develop action plans to tackle male suicide.

Suicide killed a record number of people in Australia in 2019 according to data released by the Australia Bureau of Statistics today (Friday 23 October 2020).