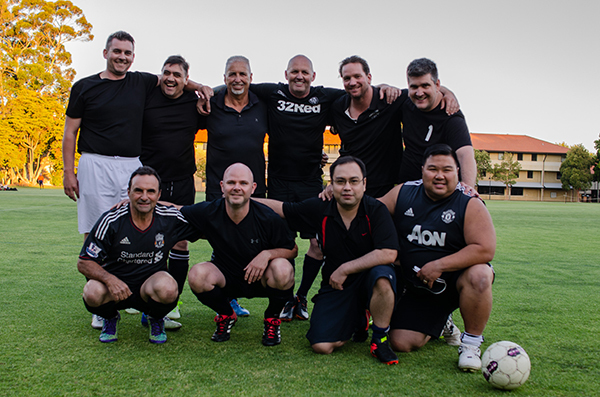 MAN v FAT Soccer is a program for Australian guys who want to lose weight and improve their overall health. Every player is in the same situation and wants the same thing – to enjoy soccer, lose weight, and get healthier. Uniquely, the league is decided not just on points won, but also on kilos lost. MAN v FAT Soccer provides support to every player with unique resources, inspiration and 24/7 coach support to help them lose weight, get fitter and enjoy the great game of soccer. In addition to playing a weekly 30-minute soccer match, players also weigh in before each game to contribute to team scores. If any amount of weight has been lost from the previous week, that player contributes a goal to the team score before they even step on the pitch. MAN v FAT Soccer launched in Australia as an initiative of The University of Western Australia, based on the highly successful MAN v FAT Football program in the United Kingdom, the first weight loss scheme to be endorsed by the UK Football Association. Since the program’s inception in Australia, over 400 participants have lost a combined total of 3,734kg so far. Just as importantly however, a PhD study into the program has revealed staggering benefits to players Mental Health. Across the program, after one fifteen week season of MAN v FAT the following average changes were reported to player mental health: Depression - Down 19% Anxiety - Down 8% Stress - Down 21% Self Esteem - Up 5% Body image - Up 21% Optimism - Up 11% Participant Mark Jennings, aged 48, has lost 19kg after his first season in the program. Speaking on his experience in the Cockburn league, Mr Jennings said, “Being in a team environment which I missed from my sporting days gave me the motivation to keep losing weight each week so I didn't let my team mates down. The fire in the belly returned – so much that I lost weight every week from the motivation this program has given me.” The program is continually expanding, with 10 current leagues and plans to continue expanding across Australia. The program is primarily based in Western Australia currently with 9 of 10 leagues located in WA, but discussions with partners in a number of other states are ongoing.