This article is republished from The Conversation under a Creative Commons license.

Prime Minister Scott Morrison said in recent days that “TAFE is as good as university”, and in many cases leads to better pay.

TAFE plays a vital role, but for most university students, a TAFE course is not going to increase their income. University graduates usually have higher rates of pay and employment than non-graduates.

But a new report from the Grattan Institute – Risks and rewards: when is vocational education a good alternative to higher education? – looked at the employment outcomes for students leaving school with a lower Australian Tertiary Admission Rank (ATAR) (their main entry criteria into most undergraduate university programs).

It found men with a lower ATAR have options among vocational educational and training (VET) courses that can get them a job faster, and often higher earnings, than if they do a university degree. But these VET options are less attractive for women. And women who choose them often have poor outcomes, such as being denied a job in a male dominated industry like engineering. 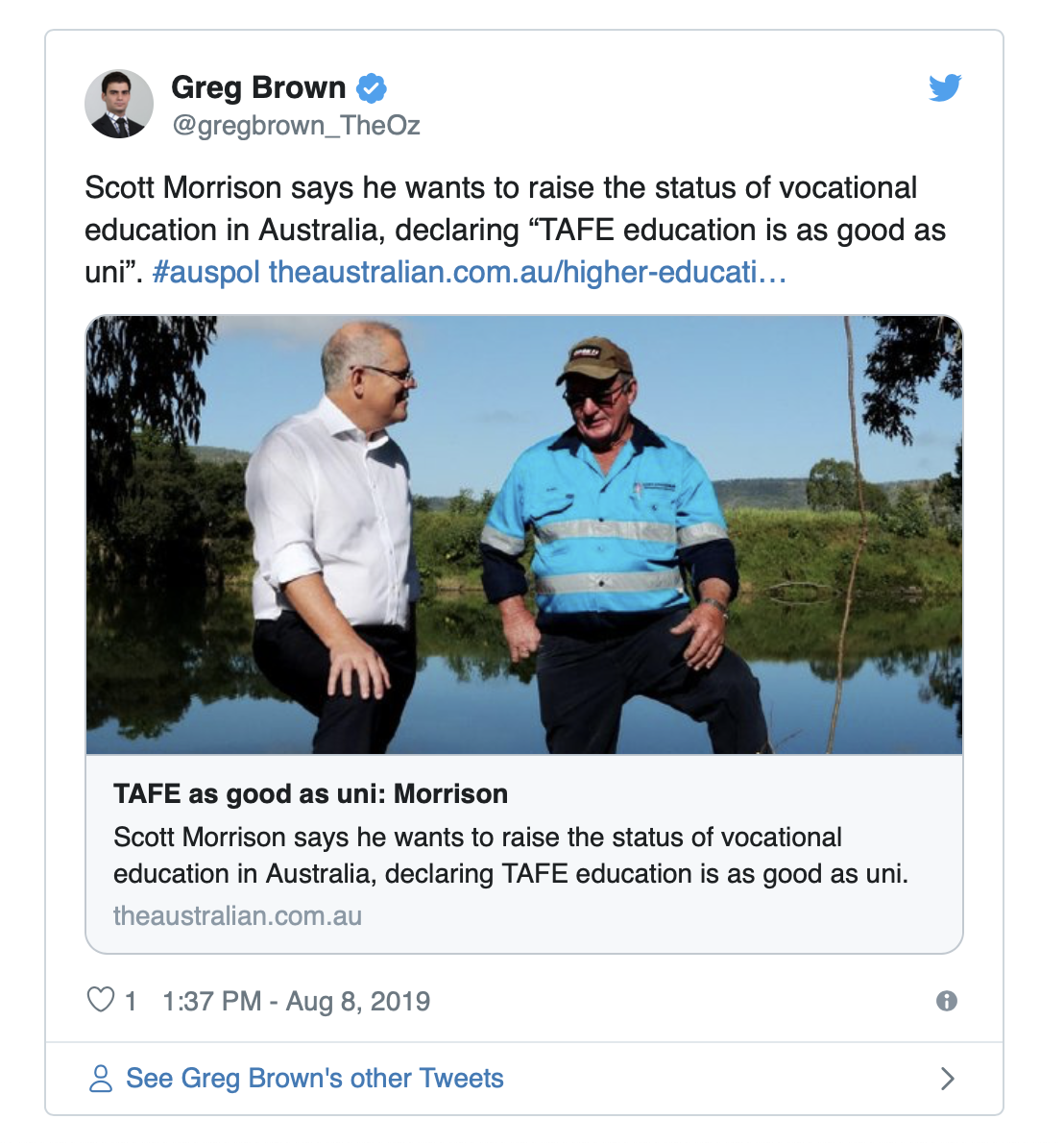 ATAR is not everything. It does not perfectly predict university results or outcomes after university. But compared to graduates with a high ATAR, graduates with a lower ATAR have, on average, worse academic results, lower rates of high-skill employment and less earnings.

The Grattan Institute report looked at VET courses offered as a potential alternative to university. Especially once the income effects of lower ATAR are taken into account, the report found some bachelor degrees led to lower earnings than some VET diplomas and Certificate III/IV courses.

How ATAR can affect employment outcomes

Over the last decade, more school leavers have been starting university with an ATAR below 70. Before an enrolment boom that began in 2009, about 20,000 school leavers with ATARs between 30 and 70 started university each year. In more recent years, the reported number is around 34,000.

But the true figure is higher, as universities don’t always record an ATAR when it is not used to admit the student.

Employment outcomes usually improve over time, but slow career starts can have long-term consequences. The Grattan Institute report used data from the Longitudinal Surveys of Australian Youth (LSAY), which tracks young graduates up to age 25.

Graduates with a lower ATAR are more likely than those with a higher ATAR to fail subjects during their degree. But fail rates differ between courses. In education and nursing, for instance, graduates with ATARs below 60 failed 5% of all the subjects they took. This was half the fail rate of disciplines such as science, engineering, IT and commerce.

With fails on their academic transcripts, graduates with a lower ATAR have more trouble finding full-time work within four months of finishing their studies, and the jobs they find are less likely to use their skills.

But when it comes to employment options, the course matters more than the ATAR. In the months after graduation, humanities, science and commerce graduates with higher ATARs struggle more than nursing or education graduates with lower ATARs to find a job.

Men’s VET options could make them better off

To be considered a potential better choice, a course must plausibly interest the student and have better employment outcomes. There is no point telling a potential performing arts student an accounting diploma would improve their job prospects.

Young people with lower ATARs considering science would receive a university offer, but could potentially earn more enrolling in a VET diploma (as shown in the chart below). 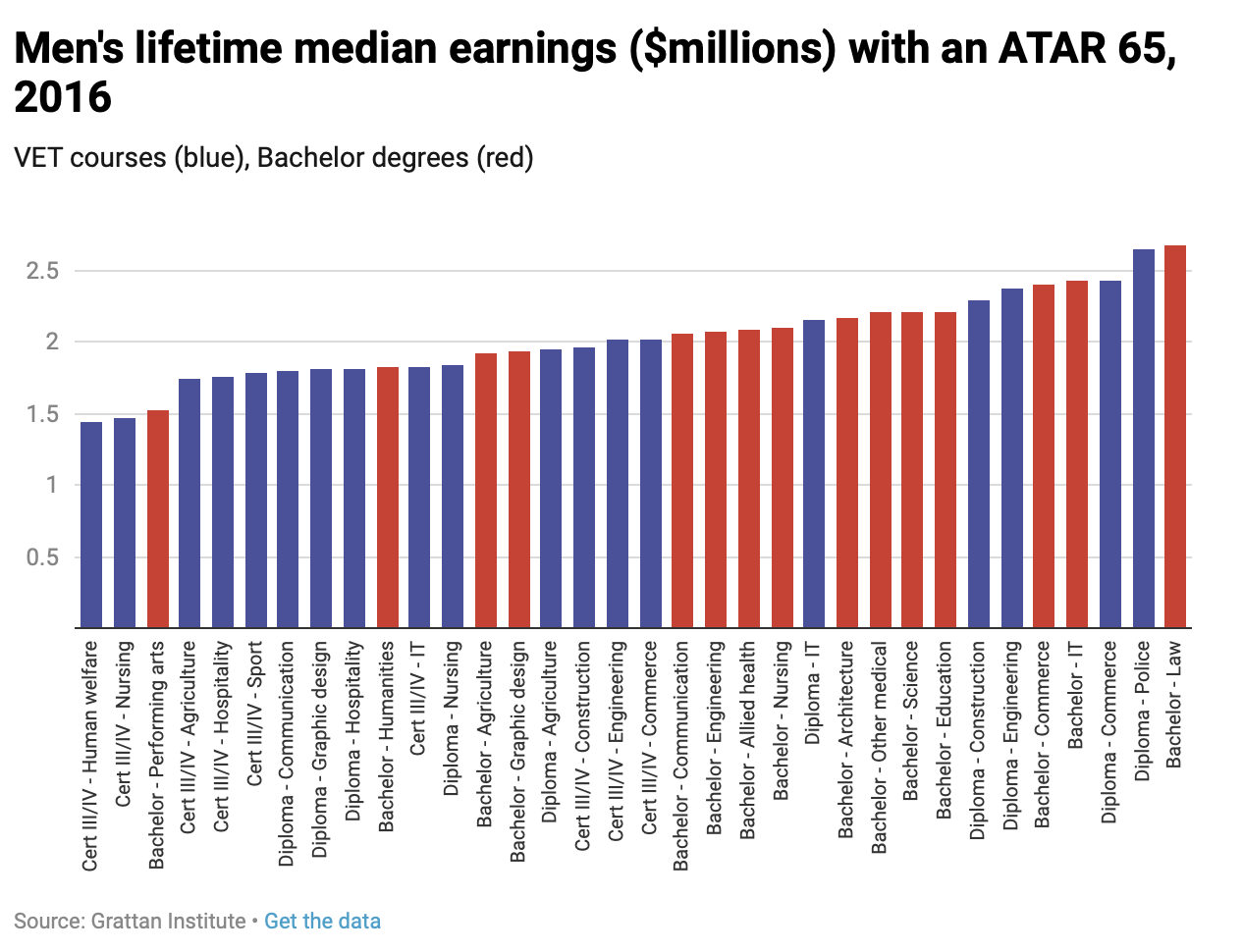 Similarly, about one in five men whose first preference is arts (another high-risk field) have a lower preference for commerce.

For men, with a lower ATAR, a commerce-related VET diploma would give them better employment prospects than an arts degree. These and other possible alternatives can be seen in the chart. Often a diploma is acquired after first completing a Certificate III/IV course.

Women should stick with uni

Women make up the majority of students who enrol into university with a lower ATAR. For them, a commerce diploma can sometimes be a good alternative to university, too. But otherwise women’s realistic choices differ from men’s – for both positive and negative reasons – in ways that make VET less attractive.

A positive reason is that two popular courses for women with lower ATARs – education and nursing – have good outcomes. Rates of professional employment for graduates of both courses are high across the ATAR range.

Nurses and teachers with higher ATARs who went to university tend to earn more than those with lower ATARs but the differences aren’t large enough to not recommend a bachelor degree over a VET course (as the chart shows). 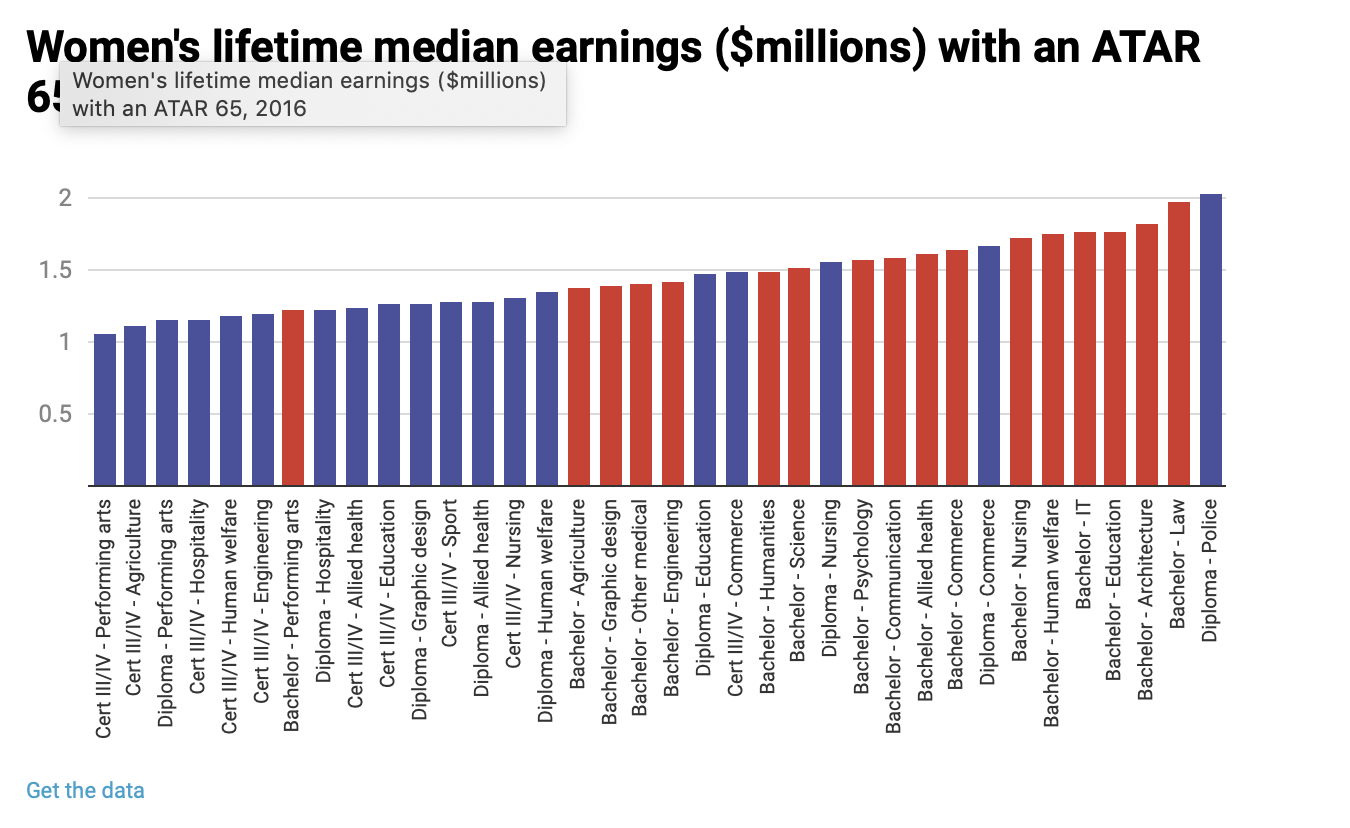 A negative reason why vocational education is less attractive for women is that they show little interest in engineering-related fields that are popular for men. Once qualified, these men often work in construction, manufacturing, electrical and maintenance related fields.

But even when women have the relevant qualifications they often work in other occupations that pay less but offer more flexible working conditions.

VET fields popular with women, such as child care, nursing, aged care and hospitality have a large number of job vacancies, but don’t pay as well as most graduate occupations.

Vocational education does get overlooked in careers advice. But VET is less attractive for women than for men, if pay is a significant factor in course choice. Women have been a majority of university students since 1987. Given the nature of the labour market, it is not hard to see why.

This article is republished from The Conversation under a Creative Commons license. Read the original article.