Join us for an inspired breakfast with a remarkable panel of speakers, who will share stories and ways to improve men's mental health and wellbeing. Our breakfast will be relevant to both men and women of all ages.

For more than two decades, Glenn lived a life that many envied. As a sports commentator, he travelled the world covering elite level sport including numerous Olympic and Commonwealth Games, and called over 190 international cricket matches. Back home he commentated more than 900 AFL and WAFL games as well as a myriad of other sports and was the host of the iconic Saturday SportsTalk.

But through all this, Glenn's mental health suffered. He spent years on a complex journey of self-analysis and various medications as he endeavoured to overcome his illness. Despite making progress, Glenn descended into one of the blackest periods of his life with resulted in him resigning his position with ABC and making an attempt on his own life.

Glenn's inspirational tale of fighting his way back from the brink of despair is one of hope, poignancy and humour, with an ultimate goal of encouraging everyone whose life has been affected by mental illness that help is at hand.

Kaine has several years of clinical psychology experience, including working with children, adolescents, and adults. He has worked as a Youth Worker, Outreach Worker, and Psychologist and founded community mental health and wellbeing promotion charities MyLocalMind Inc. and Fremantle-based subsidiary FremantleMind Inc.

Brad was a survivor of the 2002 Bali Bombing which killed seven of his close friends. He will tell his story of the attack, and give you an insight into how he has dealt with the effects of trauma and grief over the last 17 years. This will highlight the importance of understanding your personal mental health condition and how to seek the help and guidance when required to keep you being mentally healthy.

Brodie is a Schools Program facilitator for zero2hero and Lead Mentor on Camp Hero. He first joined zero2hero in 2015 as a student on the camp program where he found his passion for mental health and suicide prevention. Since becoming part of the team, Brodie has completed the SafeTalk and ASIST certifications as well as the Level 1 Rites of Passage Leadership training.

Brodie is an experienced Positive Education and Rite of Passage facilitator, working on Christ Church Grammar Schools Year 9 program ‘On Queenslea Drive’ (OQD) and is currently studying a Bachelor of Education (Secondary). 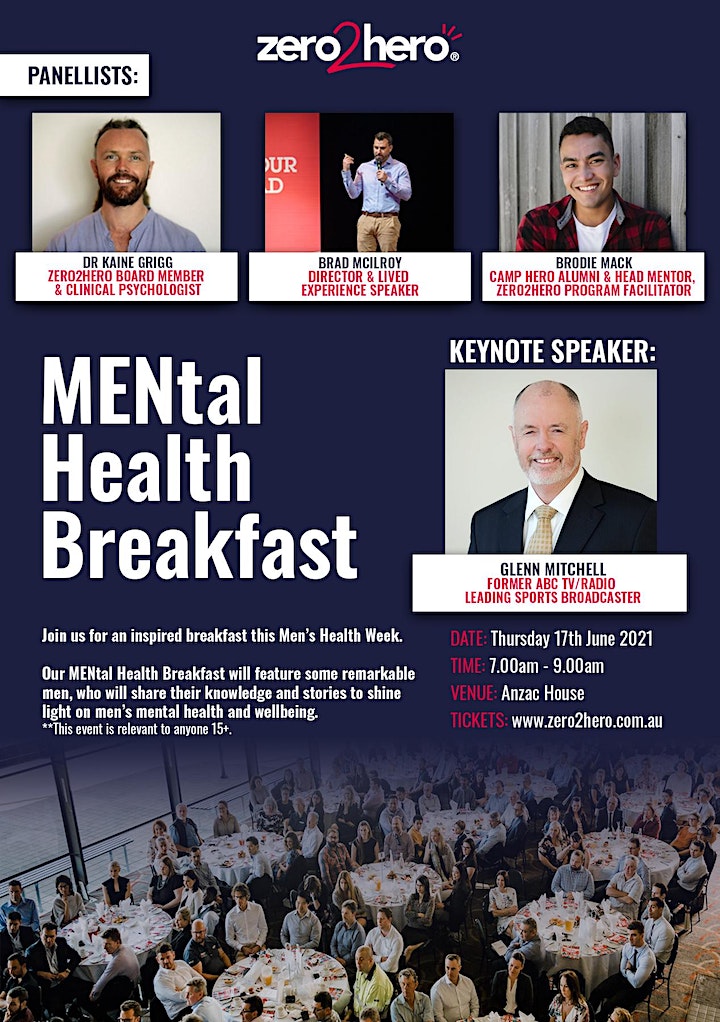