Four in five Australians say they want the Government to invest more money tackling the health and social issues that impact men, such as mental health and male suicide.

The findings follow the recent Federal Budget, when the Government announced a $3.4 billion Women’s Budget, which included an allocation of $535.8m to focus on the 5 priority areas identified in the National Women’s Health

According to the Australian Men’s Health Forum (AMHF), the charity behind the research, there was no parallel Men’s Budget and no funding allocated to focus on the 5 priority areas outlined in the National Men’s Health Strategy, which include men’s mental health and male suicide.

“No-one wants to see money taken away from vital services for women, but the current practice of funding women’s health to the exclusion of men’s health, falls short of the ‘fair share’ approach to Government funding that most Australians want and expect. 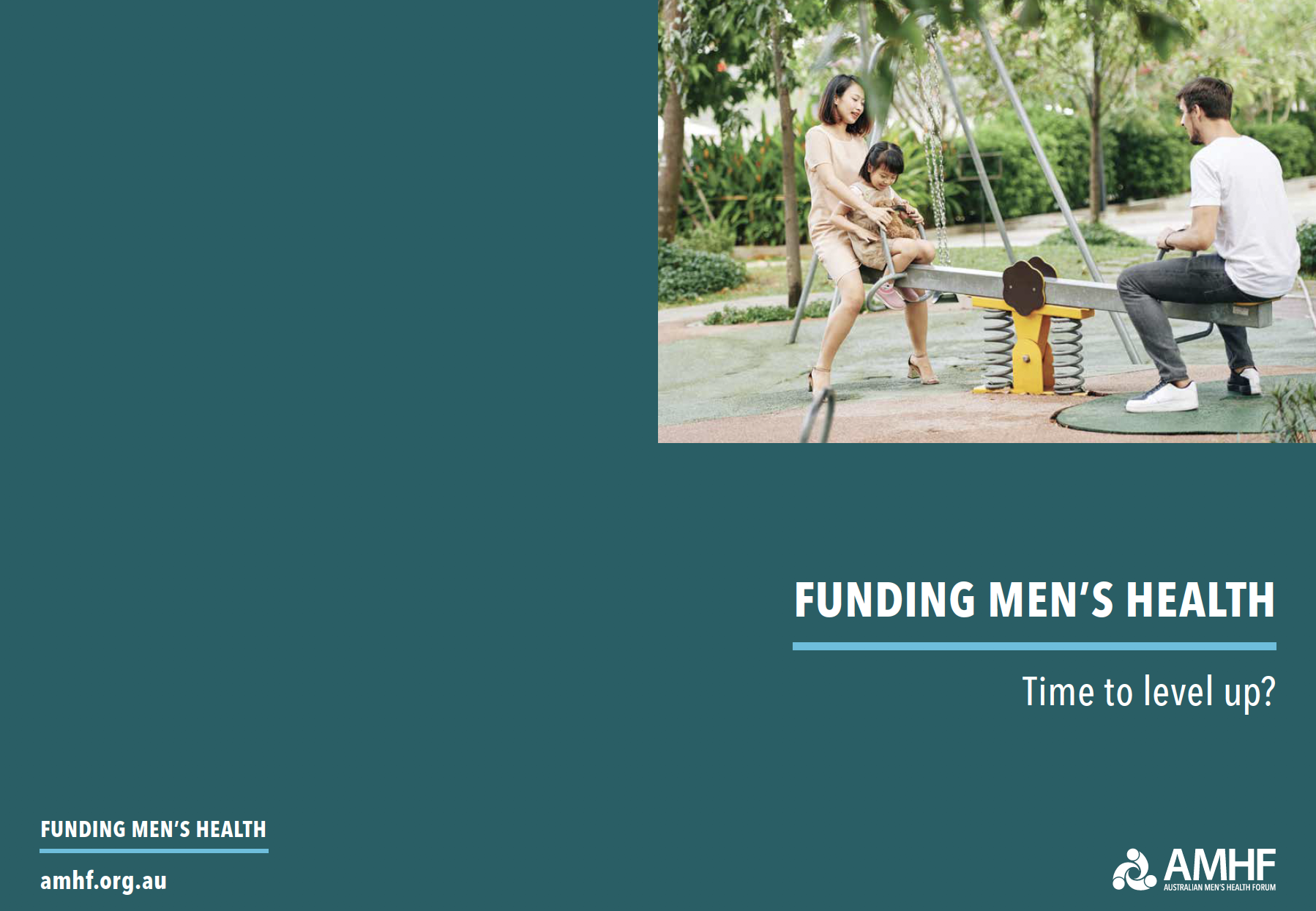 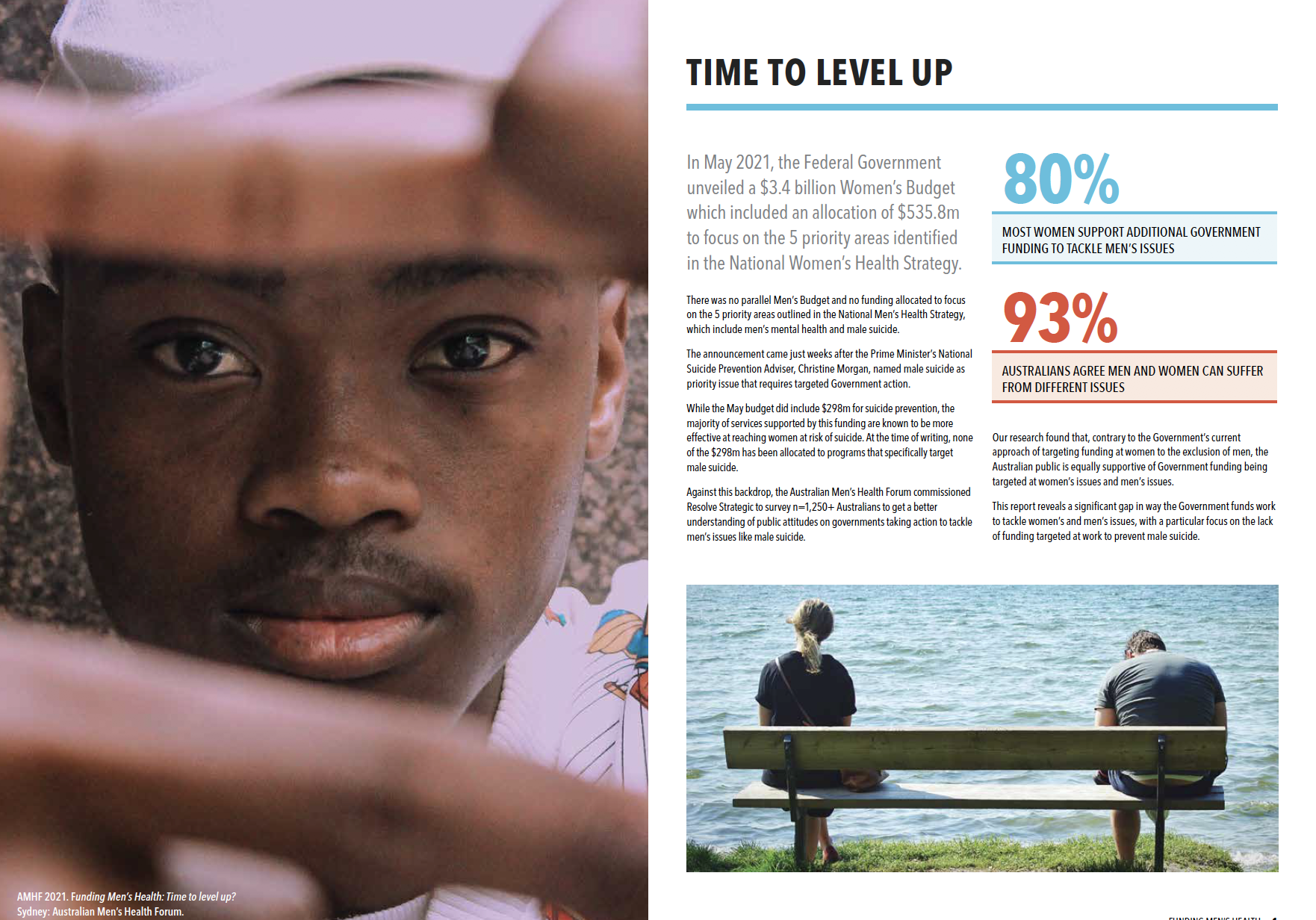 “Men in Australia die 6 years younger than women on average and account for 4 in 5 heart deaths under 65; 3 in 4 suicides; and, 2 in 3 preventable deaths. Men are disproportionately impacted by a number of gender health gaps, but we continue to invest more time, money and resources into improving women’s health.”

According to AMHF’s report (Funding Men’s Health: Time to level up?), there are four key areas of funding where men’s health comes a poor second:

The research confirmed that Australia prides itself on the importance of equality, with 9 in 10 people (89%) agreeing it is important to aim for equality in our society.

When asked about gender equality, 93% of Australians recognise that men and women can suffer from different health and social issues. In terms of Government action, around 8 in 10 people (78%) say “it is OK for men and women to receive targeted services and support”.

When asked to consider what proportion of funding should be allocated to men’s issues and women’s issues, only a tiny minority thought that either women (3%) or men (2%) should receive the majority of Government funding and support.

In comparison, a significant minority (1 in 3 people, 33%), told us that “men and women should receive roughly half of all funding and support”.

In general, however, most Australians seem to take a very pragmatic view with 3 in 5 (59%) telling us that funding and support should be allocated on the basis of need, regardless of gender.

When asked to rank a range of men's issues in order of importance, by selecting 3 issues that are a priority to tackle for men, there were two overlapping issues that stood out.

The men’s issue that is of greatest concern to Australians is men’s mental health, with 62% naming this as a priority. Preventing male suicide was the public’s second greatest concern, with 50% naming it as the key priority.

In response to these findings, AMHF published a Charter for Men’s Mental Health that was launched at a round table meeting with David Coleman MP, the Assistant Minister to the Prime Minster for Mental Health and Suicide Prevention on Friday, in the run to Men’s Health Week.

“Preventing male suicide is a national priority. Men account for 3 in 4 suicides in Australia and yet our research consistently finds that up to 4 in 5 clients of Government-funded suicide prevention services are women.

“We want to see significant funding allocated to suicide prevention programs and services that are specifically targeted at men. Our research shows that the vast majority of Australians would back such a move.”

The public opinion research commissioned by AMHF was conducted independently by Resolve, a market research agency founded by Jim Reed.

Jim has polled for 20 general election campaigns, was pollster for the successful Marriage Equality vote in Australia and is pollster to The SMH and The Age via the Resolve Political Monitor.