Bereaved dads heal on the playing fields of Ireland

The power of soccer is again being used to assuage the pain of losing a child.

An international charity match will take place in Dublin’s Dalymount Park at the end of May between fathers of Féileacáin, the Stillbirth and Neonatal Death Association of Ireland and a Cardiff-based team from its UK counterpart, Sands.

The Irish squad is made up of 37 bereaved dads from 14 counties and organisers hope the gathering together around a shared love of soccer will help them share their grief.

Tony Owens, who lost his son Arthur before birth, wanted to provide a vehicle for men to talk if they felt the need. And he did. “I love saying his name and I love other people mentioning his name.

“We’re all in the same situation.”

Every player will wear a purple jersey with a zero on the back and the name of at least one child.

The word Féileacáin means ‘butterfly’ in Irish and the organisation was established in 2010. Chairwoman Mairie Cregan says more men are contacting the organization following the loss of a child, even after decades have lapsed. 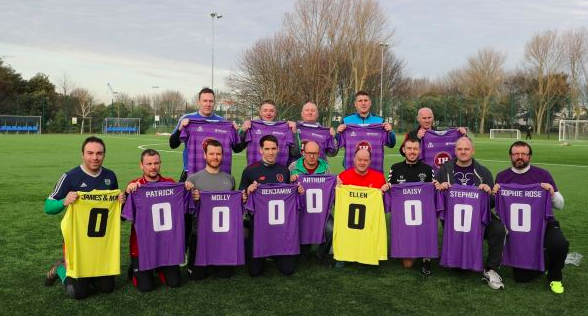 “These men are saying they realise they have missed out on years of mourning,” says Mairie. “They are coming to the end of their lives now – it’s heartbreaking to see it.”

Father Mark Boland said watching his wife go through labor at 30 weeks knowing their son Ben had died was ‘as heartbreaking as you can imagine.’

“Our relatives and friends didn’t know how to deal with it. They tried to be supportive, but they tended not to speak about it. They would talk about everything except that Ben had passed on.”

Boland, who had also lost his father at an early age and suppressed his grief at the time, said it was extremely hard to watch his partner experience a stillbirth both mentally and physically, and that while the primary role of men was to support their wives, "I think the fathers need a bit of support as well."

“I find the speaking about it intense but then afterwards I get huge relief,” he said.

Having soccer as a unifying force gave each man involved an opportunity to get together and share their feelings.

The number of soccer teams forming with fathers, uncles, brothers and friends bereaved through stillbirth or neo-natal death is growing, with now half a dozen Sands Utd FC teams in Northern Ireland.

Sands United FC is a movement set up by Charlotte and Rob Allen, who lost their daughter Niamh in 2017. They staged a charity football match at Northampton Town FC the following year to support Sands (Stillbirth & NeoNatal Death, established in 1978 to ensure anyone affected by the death of a baby receives the best possible support).

Sands United FC continues to share its message across the UK as more teams form to break the silence around baby loss.

Read: How do you get bereaved dads to talk? Bring a football (Irish Times)

Find out more about Sands UK: and Sands Australia