A doofus, to quote the Cambridge English dictionary, is an ‘airhead’ ‘birdbrain’ ‘duffer’ ‘asshole’. A noun to describe, says Google, ‘a stupid person.’ In some sections of the media, it is also synonymous for dad.

“The doofus dad is that clueless and slightly-crap-at-everything dad who inhabits every second children's TV show,” he wrote in The Sydney Morning Herald last month.

“He has a good heart but is incapable of performing the simplest of domestic tasks, especially if they involve caring for children.”

He cites some examples, for those familiar with today’s hit kids’ TV characters:

But in one episode it takes his pups to the pool and forgets to pack anything they might need. Duh! 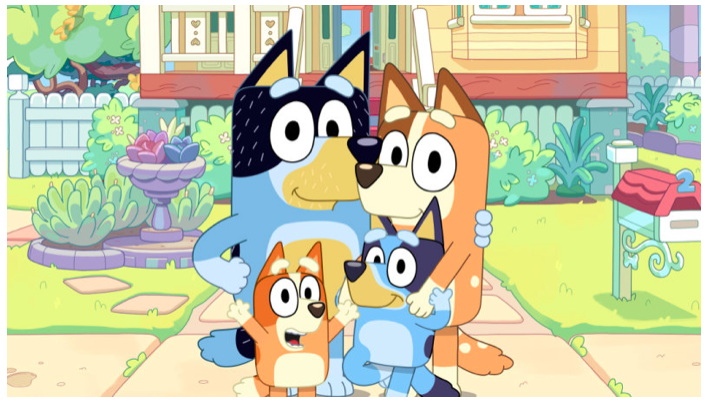 Bandit with his family in the TV show, Bluey.

Hunter said: “With stay-at-home dads, people found them endearing because they're trying to take on this role, but they’re not doing it well. It’s like, ‘Oh, look at you trying hard doing this thing, but of course you can't do it as well as a mother because you'll never be a mother. But it's nice you're trying.’”

“It's like saying, ‘It's okay to be doing these feminine things, but doing it poorly means you're still masculine’,” says Dr Hunter.

She said TV creators were missing out on an opportunity to challenge stereotypes of fatherhood.

“The media reflects reality and also constructs reality,” says Dr Hunter. “I think it's a two-way street with the media writing about what's happening. And then also, we refer back to what's happening in the media to make sense of what we're doing.”

Adds Scanlon: “We need to update the models of fatherhood on our screens to reflect our realities. In 2019 there is is no place for the doofus dad on our screens or in our homes.”

An article in Adweek last year reported that dads were also sick of being portrayed as doofus’ in advertising campaigns.

Fathers want an updated portrayal that better represents their engagement with fatherhood, a move that would have a positive ripple effect across industries and society as a whole, according to the experts.

“This is a time to let go of tired stereotypes and find more current and enlightening ways to depict and connect with men,” said Wanda Pogue, chief strategy officer at Saatchi & Saatchi New York. “Marketers can do so by focusing on the shared roles men are assuming in running the household.”

According to a study by MDG Advertising, 74 percent of millennial fathers feel advertisers and marketers are “out of touch with modern family dynamics,” while 38 percent believe brands do not portray their role as a parent accurately.

While messages sent to girls and women had become more empowering, representations of blokes had stagnated.

“There’s real change in the air—the role of the modern mother has been reframed, but men have been left behind,” said Ruth Bernstein, co-founder and CEO of Yard NYC. “There’s an opportunity to speak directly to dads, to recognize modern parents share values that feel more equal.”

“Years of traditional ideals and cultural norms of fatherhood and masculinity are shifting,” said Anthony Del Gigante, director of brand at MDG. “The fact that only 7 percent of men say they relate to depictions of masculinity in media today highlights the disconnect between modern men and they ways they are portrayed.”