The men’s health organisation Gotcha 4 Life, has come up with a novel way of combating the social side effects of COVID-19’s distancing rules,  launching a COLIV19 campaign.

The challenge is simple. Once a day for 19 days, people are encouraged to reach out to someone who they think could do with a bit more support.

Step two involves taking a photo of your interaction, or writing about it, and then to share on social media with the hashtag #COLIV19 #Gotcha4Life. At the same time, tag friends and ask them to do the same, hence creating a viral online movement for the better.

“It is now time to ask ourselves, how do we ‘co-live’ on this planet in a more connected, positive and supportive way in the era of ‘COVID’ and beyond,” says Gotcha4Life.

The organisation’s founder Gus Worland, also a TV and radio host, is on a quest to reduce male suicide and says now more than ever, blokes need to know that it’s okay not to be okay.

“It’s the first time in a long time social media is actually being used for good,” he said on Channel 7’s The Morning Show.

Worland said he talked to his mate and long-time school friend ‘Jacko’ – Hugh Jackman, based in New York – regularly and put the concept to the Australian actor and entertainer.

“He was struggling in the Hamptons unfortunately just walking along the beach,” laughs Gus, who took a photo of Jackman and put it on Instagram, as per the instructions for COLIV19. 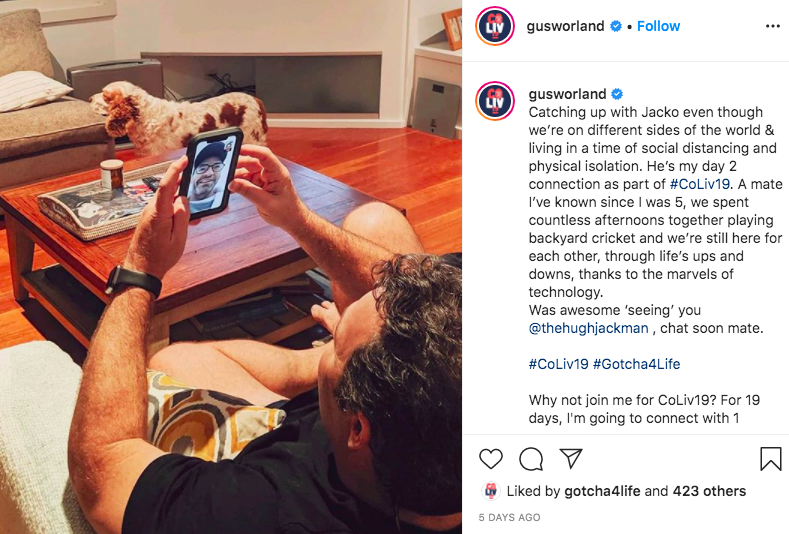 “Hopefully that will build a habit that will allow everyone to keep on doing that past the 19 days. I’ve got a feeling we will be in physical isolation for quite a while.

Worland advises people to SKYPE, text, write a letter, phone or connect in any way and be genuine about how they are feeling.