A researcher from the Queensland University of Technology says men have been neglected in studies that explore parenting and child feeding.

PhD student Jeffrey So is hoping to fill the gap in understanding the role of fathers and male caregivers in mealtimes involving children aged six months to five years.

“We want father’s voices heard in this space,” he says. “We want to have that narrative from the father’s POV and to co-design resources and strategies that will support fathers.”

The particular focus of Jeffrey’s research at the Woolworths Centre for Childhood Nutrition Research at QUT is with parents who are struggling to make ends meet in the face of increasing living costs.

Early interviews have taken place with a growing and diverse group of men who are keen to have their voices heard.

“Every dad is different,” says Jeffrey, whose respondents so far have included men going through separation and legal challenges, as well as those living under the same roof as their partner.

Jeffrey’s work is part of a wider research study on ‘responsive feeding in tough times,’ which examines food insecurity and behaviours around mealtimes.

“It’s not so much about what is on the plate but what is happening at mealtime,” he says. “Is the family present at mealtimes, is the TV is on during mealtimes, are parents paying attention to their child’s hunger?”

He says previous research on the topic has shut out men, and 98% of parenting surveys are filled out by mothers. “Why we are not looking at or including dads?” he asks. 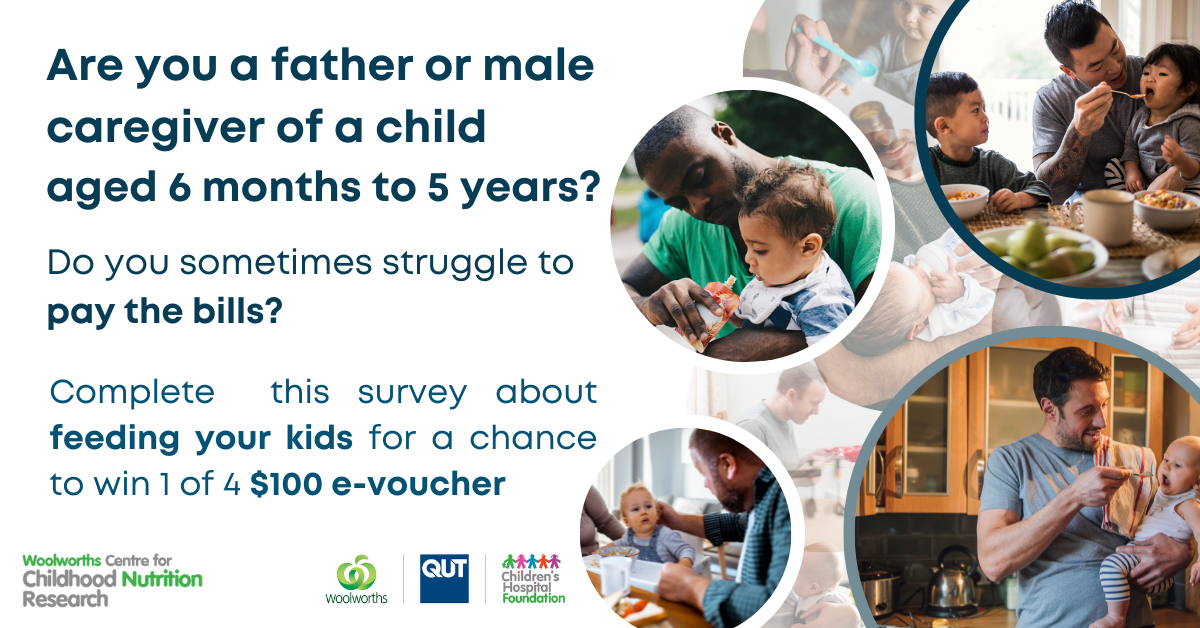 “Fathers are interested in telling me their stories. Unless you specifically ask them, that you seek their opinion, the word parent does not apply for them.

“Maybe it’s just a word choice, we need to use father-friendly language and pictures of dads. Asking them specifically.”

Jeffrey’s research starts with an online survey (open until September) and dads then have the option to be contacted for a longer interview.

The final stage will be organised with fathers to co-design engagement strategies and resources to support responsive feeding practices that promote healthy eating behaviours and growth among children.

“Sometimes the dads just tell me they don’t feel that are as welcome as mothers to child health appointments. They are not treated as equally as the mothers. They are not being asked, there is not enough for fathers in that space.

“I felt they just want to be acknowledged by doctors and nurses, when they are talking about feeding.”

Jeffrey will present his research project during the Australian Fatherhood Research Symposium on May 5.

Find out more about Jeffrey’s research and how to take part in the study:  Dads at Mealtimes