A new report on public beliefs about gender has concluded that discussions about gender equality in Australia need to be more open and inclusive. The “Girls to Men” report, from the 50/50 by 2030 Foundation at the University of Canberra, found that 71% of men and 54% of women hold a Moderate worldview that is egalitarian and supportive of gender equality.

However, this Moderate worldview is said to represent “a significant barrier to gender equality” with those who share this value system being more likely to support the following statements:

The authors say their findings “highlight the need for a more open and inclusive discussion about gender equality in Australia, as the issue is clearly far more complex than the mainstream debate allows”.

The “Girls to Men” report, from the 50/50 by 2030 Foundation at the University of Canberra, is based on a national survey on 2,122 Australians about their attitudes towards issues of sexism and gender inequality.

Consistent with similar surveys held in the past decade, the report confirmed that around nine out of 10 Australians (88 per cent agreed that inequality between women and men is still a problem in Australia today).

WHY IS THIS RELEVANT TO MEN AND BOYS’ HEALTH?

Our Framework For A Healthier Future identifies “gender beliefs” as one of the key systemic factors that shapes our health. In particular, public attitudes towards gender and gender issues can influence the actions that “The System” will and won’t take to tackle the social factors that shape men and boys’ health.

However, very little is known about the different gender beliefs that Australians hold or how these different attitudes influence different aspects of “The System” such as: 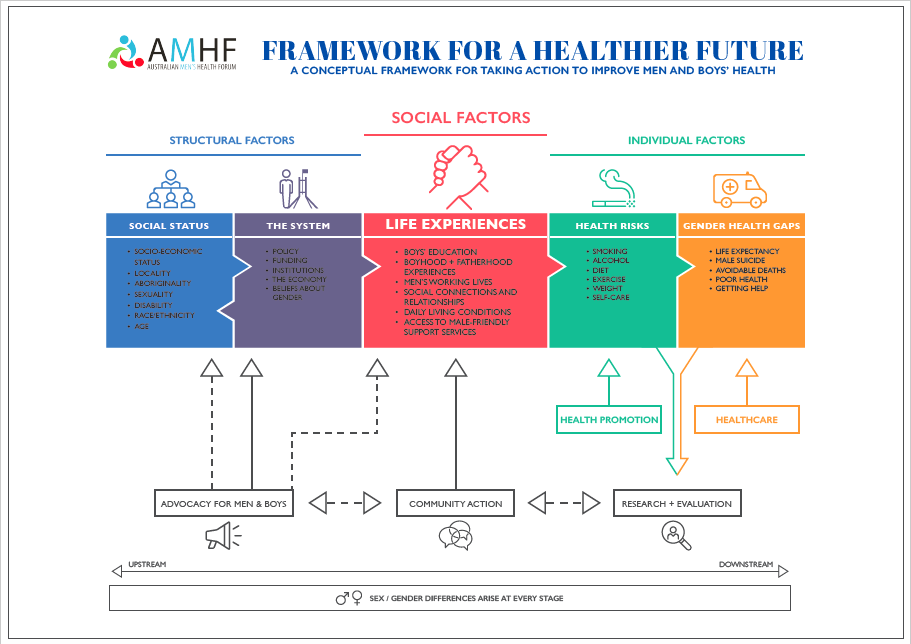 The authors of this report claim the lack of research on Australian attitudes to gender equality is one of the key reasons that “well intentioned social policies and programs have continuously failed to close persistent gender gaps across the lifespan of Australians”.

As such, the “Girls to Men” report will be of interest to everyone who is concerned with tackling the Gender Health Gaps that men and boys experience.

The “Girls to Men” report focuses on social attitudes to gender equality in Australia and makes a significant contribution to our knowledge about the different beliefs about gender and gender issues that the public hold.

The report proposes a way of grouping these beliefs into distinct sets of values: Traditional, Moderate and Progressive. The authors note that the attitudes of these three groups are not mutually exclusive, with many Australians expressing their own complex mix of viewpoints, sometimes spanning all three categories. 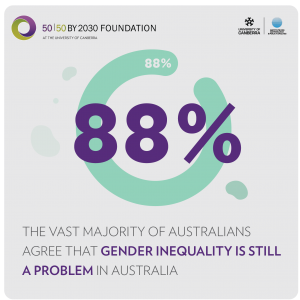 The Traditional View of Gender Issues

The Traditional view appears to be characterised by beliefs about the roles that men and women should play in society along with negative views about people who step outside of those gender roles.

2 in 5 Australians (43%) are either strongly aligned or somewhat aligned to this Traditional view. The report does not provide a breakdown of the percentage of men and women who hold this view.

The Progressive View Of Gender Issues

The Progressive view is said to be representative of those Australians who most strongly align with the need for concerted policy action on gender equality issues both in the workplace and more broadly in society.

The authors and sponsors of the report appear to be strongly aligned with this Progressive worldview and consider it to be an optimal viewpoint that is essential to the achievement to the measures of gender equality that they are most concerned with (e.g. 50/50 representation of women in leadership roles).

2 in 3 Australians (68%) are either strongly aligned or somewhat aligned to this Progressive view. The report does not provide a breakdown of the percentage of men and women who hold this view (though it is implied that more women than men hold this view).

The Moderate View of Gender Issues

Those with a Moderate view are said to support gender equality and take an egalitarian attitude towards men’s and women’s roles in the workplace and at home.

They also express a desire for men’s issues to be addressed alongside women’s issues and concern that “political correctness” is restricting freedom of speech. Moderates want the public discussion on gender and equality issues to more inclusive. 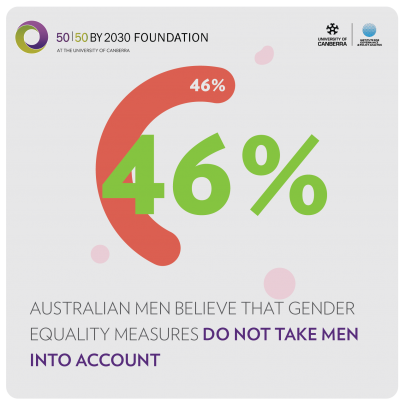 The authors of the report say that the different beliefs about gender that the Australian public hold seem to converge around this moderate value system, which sits between the Traditional and Progressive perspectives.

They appear to view this convergence as a barrier to gender equality, concluding that these moderate values are “unlikely to facilitate anything other than incremental change given the contradictions therein”.

One of the key findings of the report, for those interested in working to address gender issues that impact men and boys, is that in terms of beliefs about gender, most (not all) men and boys in Australia appear to hold a Moderate worldview.

Three key characteristics of this worldview are support for gender equality, concern that men and boys are excluded from gender equality work and the view that political correctness prevents open discussion about gender equality.

The report breaks down some of its findings into generational attitudes, looking at five distinct generations of Australians:

The report reveals some interesting differences between men and women across the generations. For example, while there is strong support (88%) for the view that “inequality between women and men is still a problem in Australia today”, support for making gender equality a policy priority is mixed.

Men showed fairly even support across the generations, ranging from 48.8% for Baby Boomers to 56.7% for Gen Z.

Women also showed fairly even support (between 62.3% and 66.8%) with the exception of The Builders (born before 1946) who reported 79.7% support for more policy intervention. Women’s support was higher than men’s across all generations.

The view that “political correctness means I cannot say openly what I think about gender equality” was held most strongly by older generations. 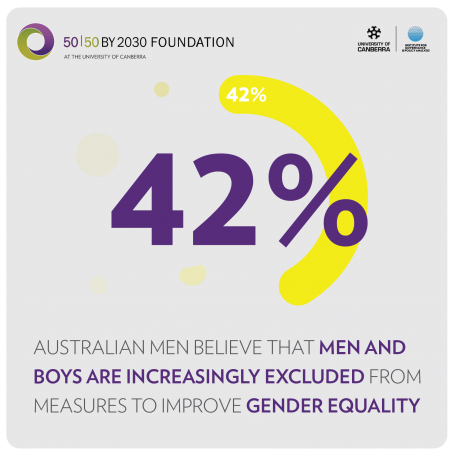 The view that “men and boys are increasingly excluded from measures to improve gender equality”, showed a more complex pattern of support. Firstly, for both men and women

Secondly, men of all ages were more likely to support this view than women of the same generation, with support ranging from:

However, the youngest women in this study were notable in being more likely to believe that “men and boys are increasingly excluded from measures to improve gender equality”, than some older generations of men. This position was supported by:

The majority of Australians support gender equality but hold a diversity of views about gender issues.

As an inclusive forum, AMHF actively welcomes a diverse range of viewpoints on health and gender issues and we encourage respectful discussion between people with differing views. It is common to hear men being called upon to talk more openly about their physical and mental health. As men's health is a gender issue, it is concerning to hear that so many Australians (and particularly men) feel they cannot speak openly about gender issues.

As such, this report's finding that we "need for a more open and inclusive discussion about gender equality in Australia, as the issue is clearly far more complex than the mainstream debate allows” is welcome. 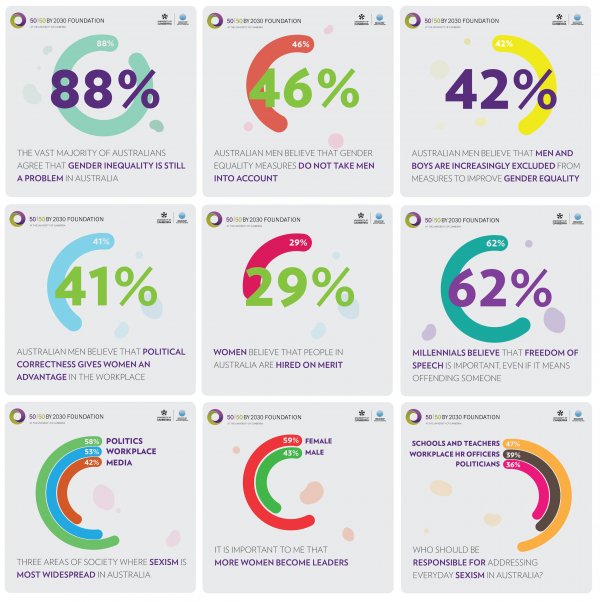 There is, however, a note of caution. The report also positions the Moderate beliefs that most men (and many women) hold about gender issues, as "a significant barrier to gender equality" and speculates that Moderates may be "vulnerable to unconscious bias against women", before acknowledging there is "no evidence to support this thesis".

One of the key shortcomings of this report is that it has failed to define what it means by "gender equality" and how the authors believe it should be measured. Much of the disagreement between those who hold different views about gender issues, stems from the fact that they define equality in different ways. One obvious example is the tension between those who favour equality of outcome as the key measure of social equality and those who believe we should place more focus on equality of opportunity or equality of rights under the law.

Any attempt to facilitate a "more open and inclusive discussion about gender equality" will need to address the fundamental question of how Traditional, Moderate and Progressive Australians define and measure "gender equality" and then wrestle with this challenge: "how do we work towards equality for everyone, in a world where people hold diverse views about how we define equality and how it should be measured"?