The proportion of boys and young men contacting the national Kids Helpline has fallen from 35% to 21% since 2008.

Kids Helpline provides a free confidential 24/7 online and phone counselling service, but only one in five young people helped by the service in 2018 were boys and young men.

In 2008, nearly 300,000 children and young people contacted the service and 35% were boys and young men. In the past decade there has been a marked decrease in the number of non-counselling contacts for information and referrals, from nearly 240,000 contacts in 2008 to around 80,000 contacts. In the same period, counselling contacts increased from around 53,000 to nearly 68,000.

These figures suggest that the number of boys and young men contacting the service during this time has fallen from an estimated 100,000 in 2008 to an estimated 30,000 in 2018.

To become more relevant the service has added online services in recent years which now account for half of all contacts. In 2018, Kids Helpline also launched four comics that aim to encourage young people to seek help and empower them to support each other by talking about suicide and child abuse in a language that speaks to them. 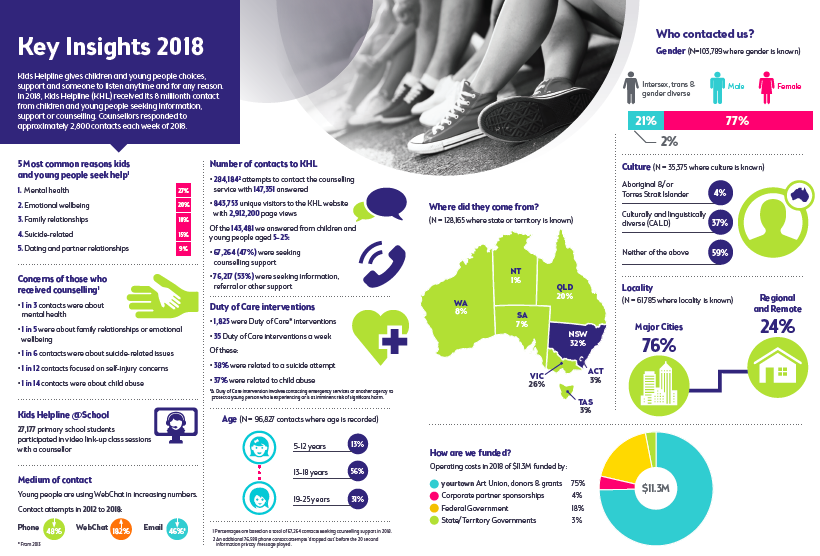 The types of issues that boys and young men contacted the service for in 2018 included:

A greater proportion (though not a greater number) of boys and young men received counselling for emotional wellbeing; dating and partnerships; friend/peer relationships and bullying.

In terms of the number of service users, girls and young women were:

This is particularly notable because 317 of 428 people under the age of 25 who died by suicide in Australia in 2017 were boys and young men.

When compared with female service users, boys and young men accounted for:

According to Tracy Adams, CEO of Kids Helpline:

“Part of becoming a man has often been to hide their emotions and this is cementing patterns of not asking for help. Instead we need to encourage boys from an early age to get help when need and encouraging men to model this behaviour for kids.

“This means mums and sisters, other women and fathers, brothers and friends letting kids know it’s ok to show their vulnerability and ask for help about anything including their mental health and suicide concerns through to peer and family relationships and emotional wellbeing.

Kids Helpline has published a national insights report together with a series of regional reports for New South Wales, Victoria, Queensland, Western Australia, South Australia, Tasmania, the ACT and the Northern Territory.