We are announcing the shortlists for the 2021 National Men’s Health Awards throughout Men's Health Week, starting June 14, 2021. Today we announce the 10 nominees in the Best Contribution to Men’s Health Research category.

Australia is a leading contributor to the global body of literature on men’s health issues. This year we want to celebrate some of the academics behind that research. We’re seeking nominations in three areas: early career researchers whose work in men’s health shows great promise; singular pieces of research that have made a significant contribution to men’s health; academics who have undertaken a significant body of men’s health research over a number of years. VOTE HERE 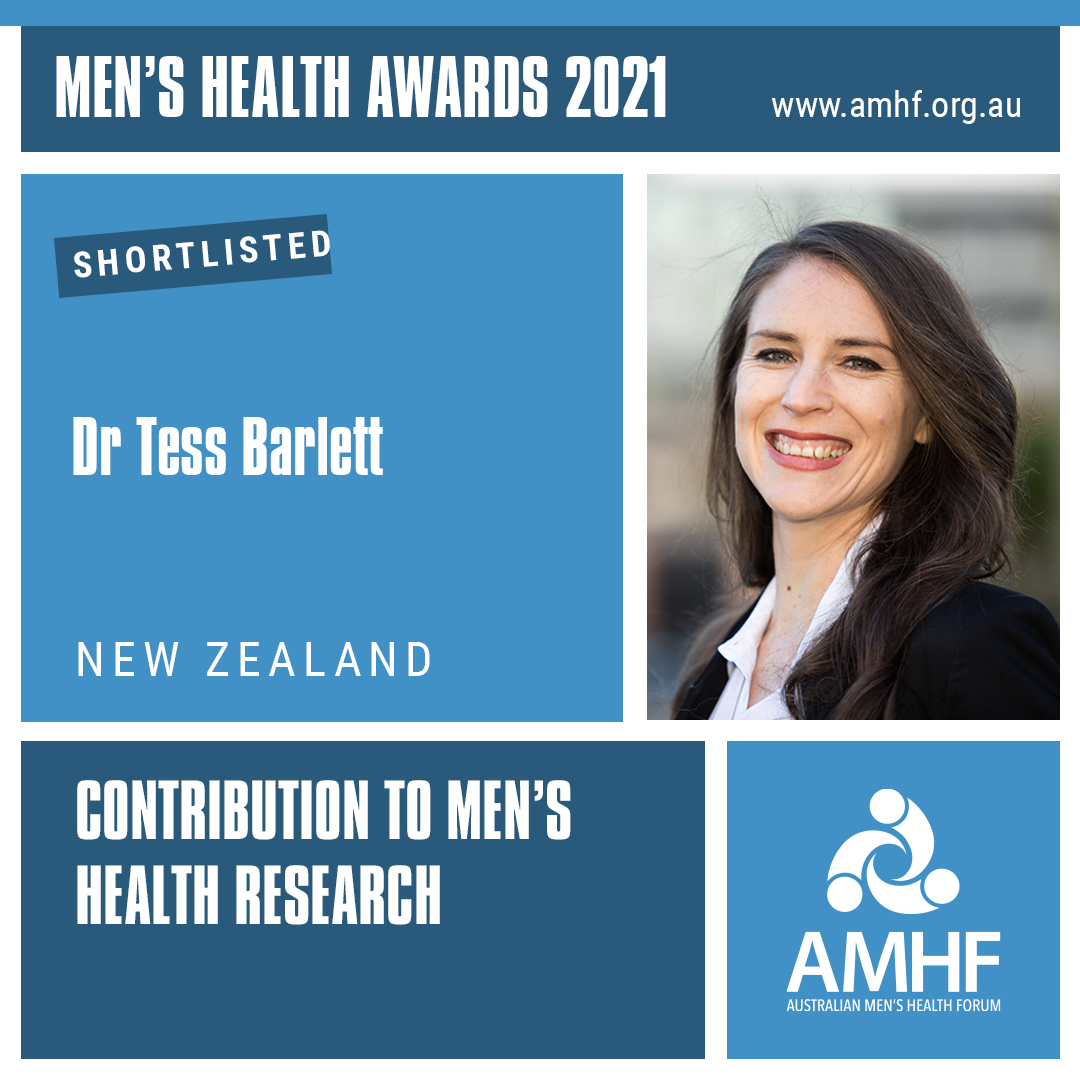 Dr Tess Bartlett’s research crosses the nexus of imprisoned primary carer fathers, masculinities, and space. She is the joint editor of the new book series ‘Emerald Advances in Masculinities’ (Emerald Publishing), bringing together a range of multidisciplinary work, including fatherhood.

Tess is the editor of the forthcoming edited collection ‘Prison Masculinities’ and works on a global collaborative project funded by the Canadian Institute of Health Research, exploring the role of prison work and prisons in shaping correctional staff health and self over time’. She will bring her expertise on fatherhood and masculinities to this project.

Tess has been interviewed for The Sociology Show Podcast, Radio New Zealand, ABC Darwin, and Monash Lens about her research on primary carer fathers in prison.

She has also won a number of awards for her research on imprisoned primary carer fathers and conducted numerous media interviews on this topic. 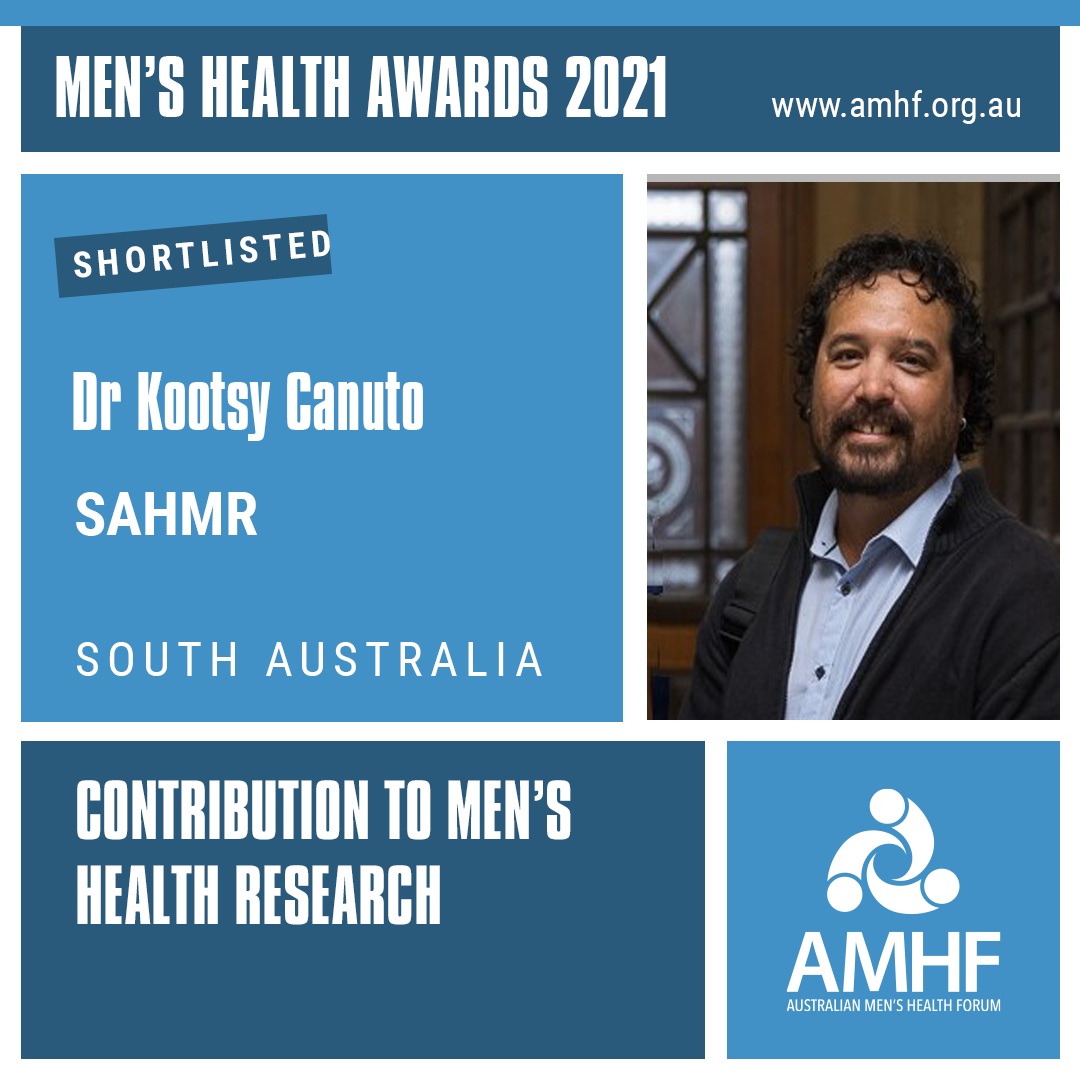 Currently, limited evidence is available to inform health services and policy makers regarding enhancing and re-orientating their services to meet the wants and needs of Aboriginal and Torres Strait Islander men.

SA Health are approaching their engagement with local Aboriginal and Torres Strait Islander male clients according to many of the recommendations resulting from Dr Canuto’s PhD research, along with evidence from the Strong Dads Strong Futures research led by Dr Canuto.

Based at the South Australian Health and Medical Research Institute (SAHMRI)), Dr Canuto is currently involved with bringing health services and the men of the community together to co-design, implement, evaluate and translate social and emotional wellbeing programs.

These relationships continue to be a high priority and guide all elements of Dr Canuto’s personal and research development. 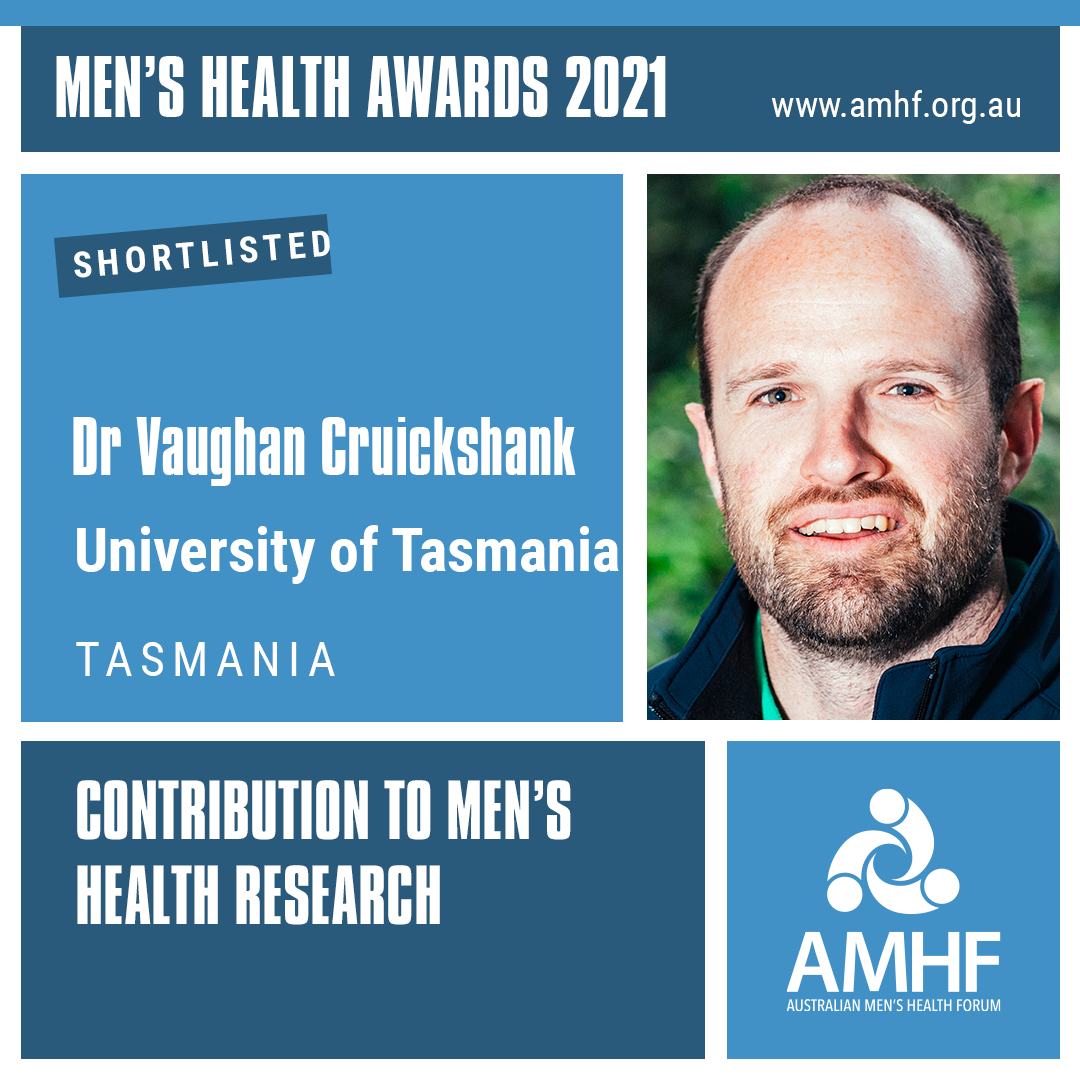 Research has noted that if this trend continues male primary teachers will become ‘extinct’ within the next 50 years, which concerns stakeholders such as parents and school leaders who believe more men are required in primary schools to act as positive male role models and father figures.

He has assisted male primary teachers through the sharing of these strategies and raising awareness of their experiences, in academic journals, at conferences, in teacher magazines and in mainstream media.

Examples include an article in The Australian, an article for the Conversation, being interviewed for TV (The Project, ABCNews24), Madonna King’s recent bestseller ‘Fathers and daughters’ and radio stations in 5 states. 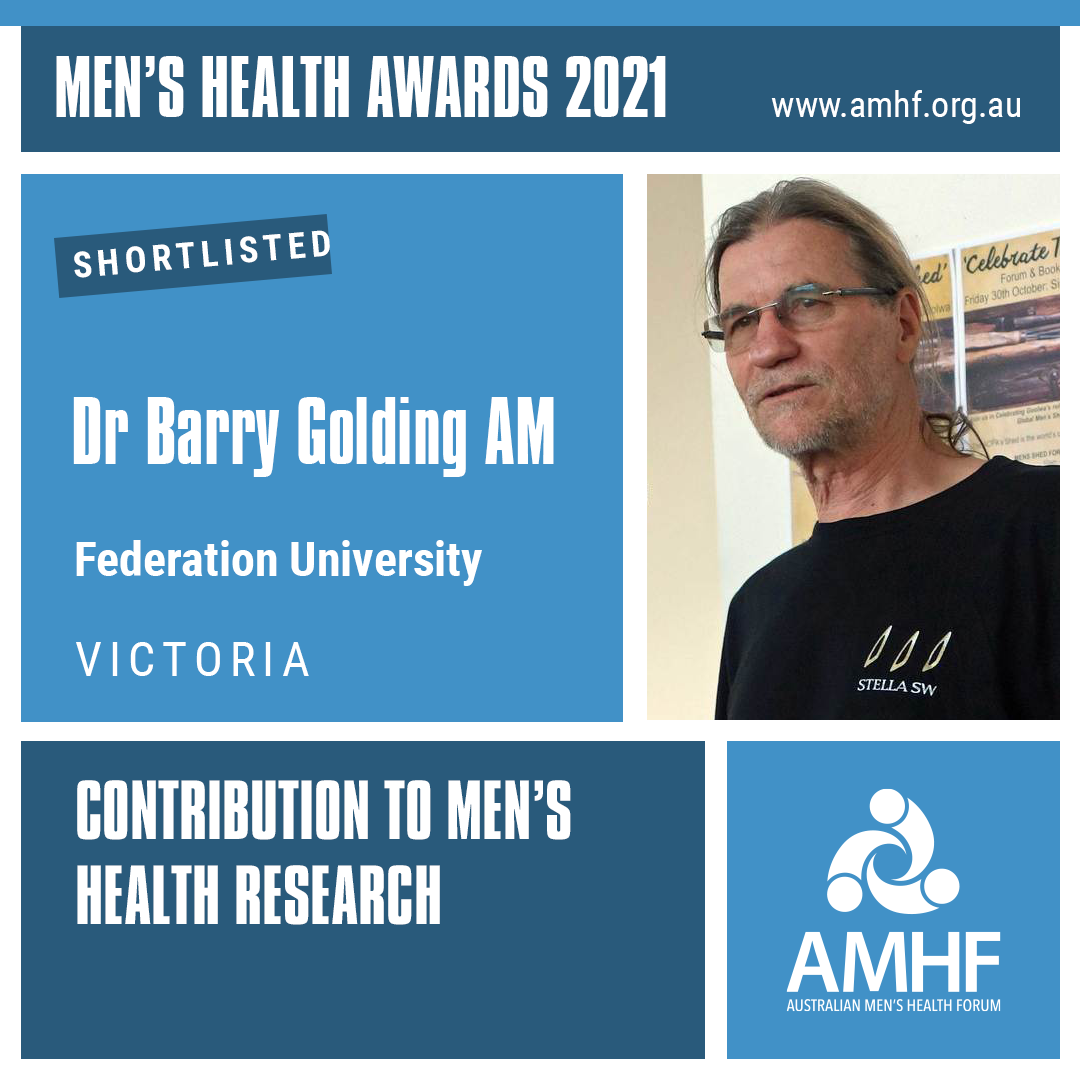 Professor Barry Golding is the world’s leading researcher in the field of Men’s Sheds and an international advocate for the Men’s Sheds movement.

He is an Honorary Patron of the Australian Men’s Shed Association (AMSA). His pithy summary of the Men’s Sheds formula, ‘men don’t talk face to face, they talk shoulder to shoulder’, has been abbreviated and used as a slogan for Men’s Sheds movements worldwide.

In June 2016, he was appointed to the Member of the Order of Australia (AM). 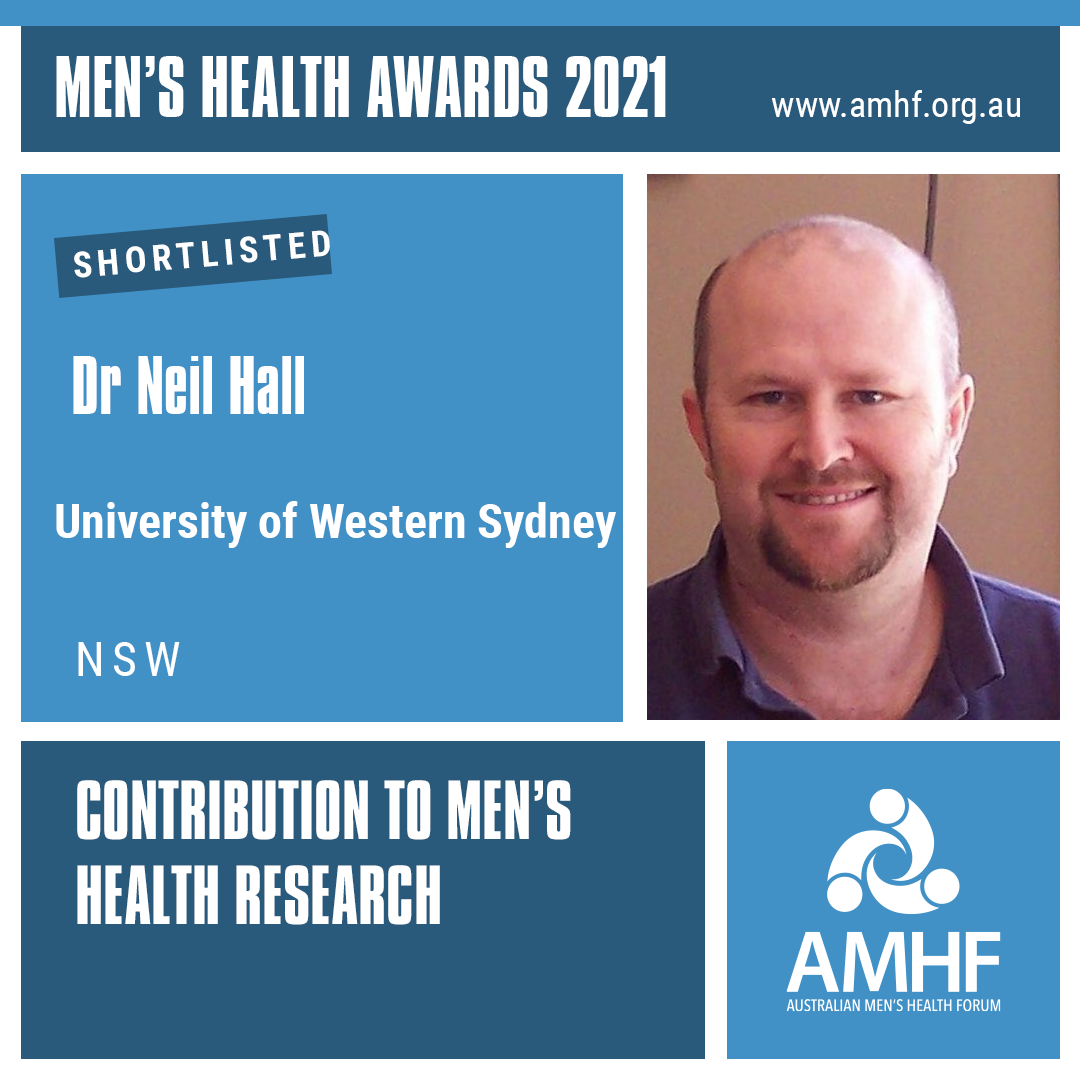 Over the past 15 years, Dr Neil Hall has focused on building an evidence base on which to base decisions about policy, funding and program delivery for the health of men and boys. As a Senior Academic in Social Work at Western Sydney University (WSU), and academic lead for Men's Health Information Resource Centre (MHIRC), Neil has engaged in research partnerships with diverse organisations.

Neil coordinates National Men's Health Week in Australia and is a founding member of WSU's new Centre for Male Health. 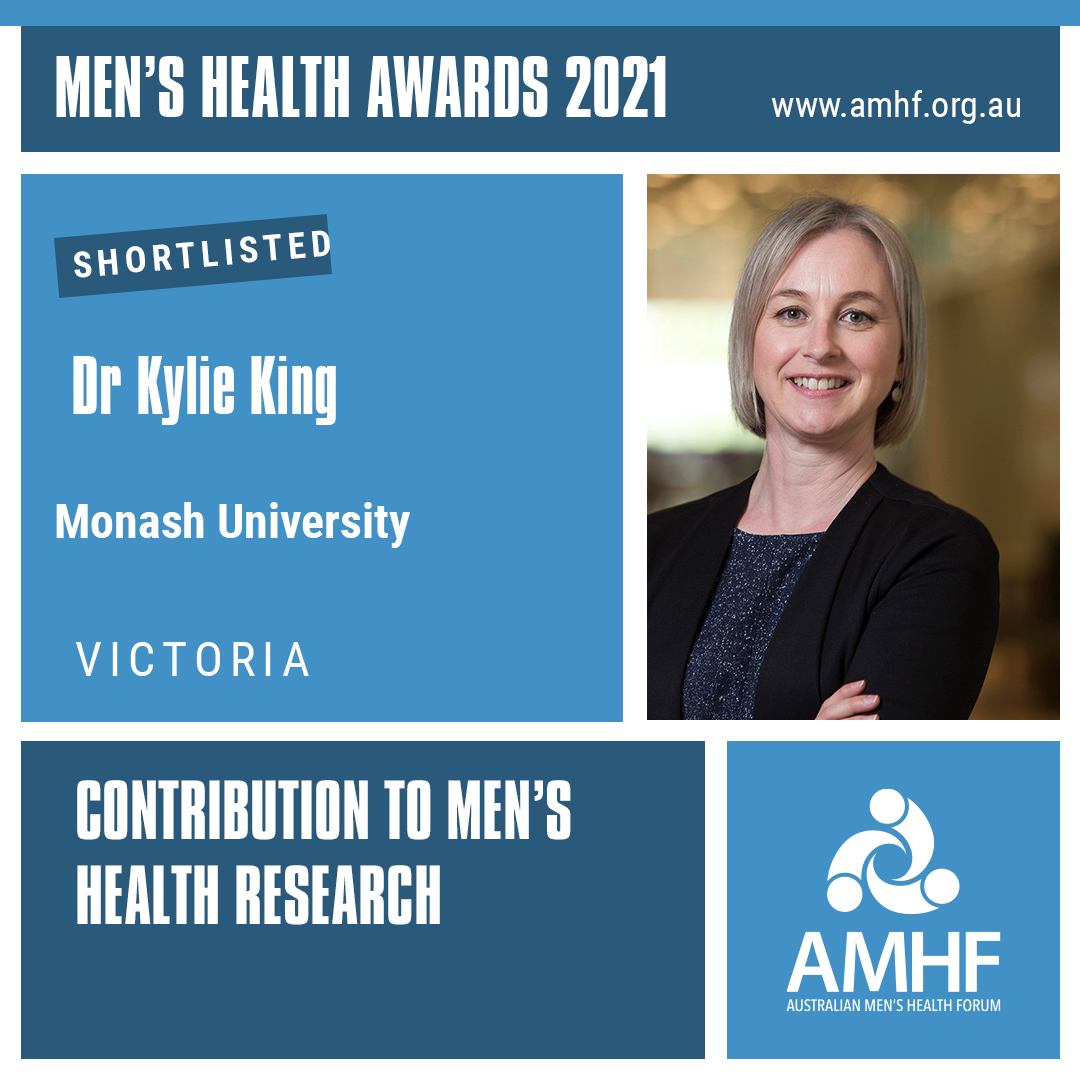 Dr Kylie King is a Senior Research Fellow at the Turner Institute for Brain and Mental Health at Monash University.

Dr King worked as a psychologist before moving into a research role over 10 years ago. She has since developed expertise in male suicide prevention research and program evaluation.

Together, this research experience has led to a particular interest in the development and evaluation of public health interventions to bring about positive impacts on boys and men’s mental health and suicidality across the lifespan. 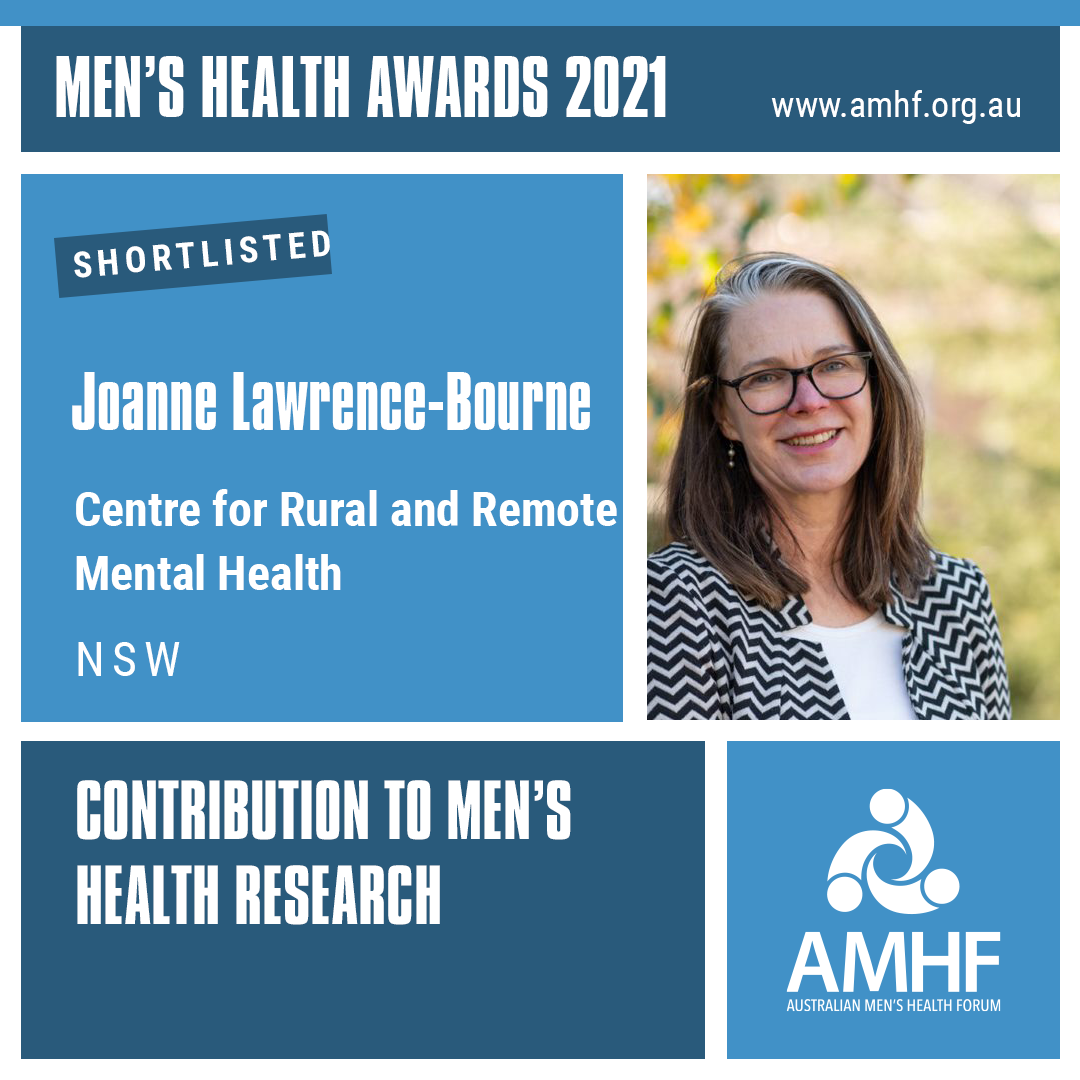 Joanne has combined her career and studies in midwifery and psychology to focus her research and counselling work on the psychosocial experience of human reproduction.

Her psychology Honours thesis and PhD had a particular focus on male childlessness, asking men what it is like not to have children.

Although there is change, social, cultural and religious pressure to have children remains. Joanne has been inclusive of same-sex couples and non-binary gender. Her research and blogs contribute to the often-unexplored association of reproductive journeys and related mental health.

Men experience having and not having children in different ways and with vastly different emotions. Within the reproductive sphere, Joanne has found that men are often left out, their experiences not considered and their voice unheard. 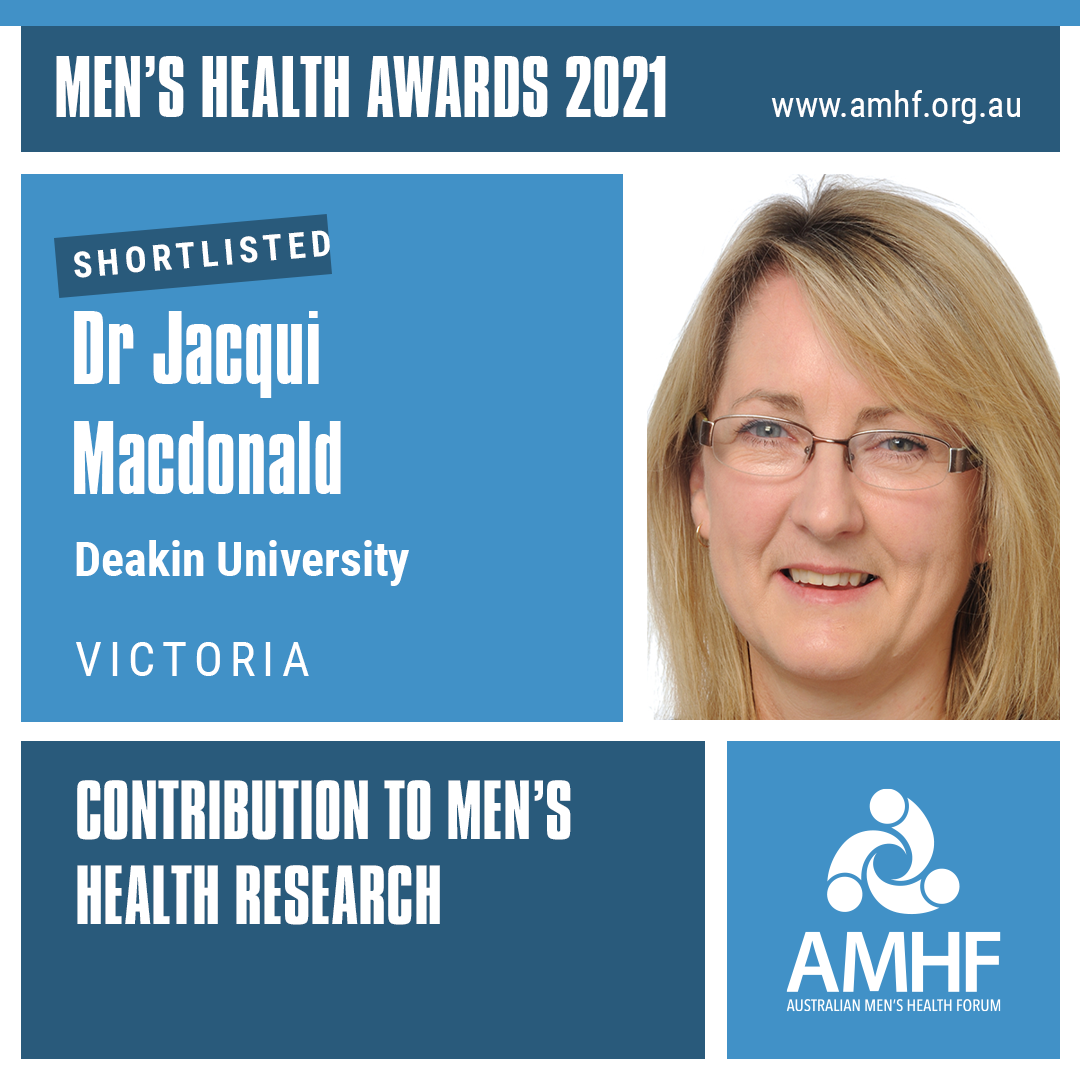 Dr Jacqui Macdonald is a senior research fellow in psychology at Deakin University where she leads the Men and Parenting Pathways program of research, which investigates men’s mental health and wellbeing and how it affects and is affected by family life.

She is on the Scientific Advisory Group of ‘Ten to Men’, Australia’s longitudinal study of men’s health. She convenes the Australian Fatherhood Research Consortium (AFRC), established in 2017 to advance the science of fatherhood, inform practice and policy that supports men and their families, and promote healthy inclusion of fathers in family life.

On behalf of the AFRC, she hosts an annual symposium to showcase fatherhood research and to forge new collaborations Australia-wide. Dr Macdonald’s own research draws on longitudinal studies from childhood to parenthood to identify factors that might break intergenerational cycles of poor mental health and inform ways to support boys to become healthy, adjusted next-generation fathers.

Read about the AFRC: http://mappresearch.org/fatherhood-consortium 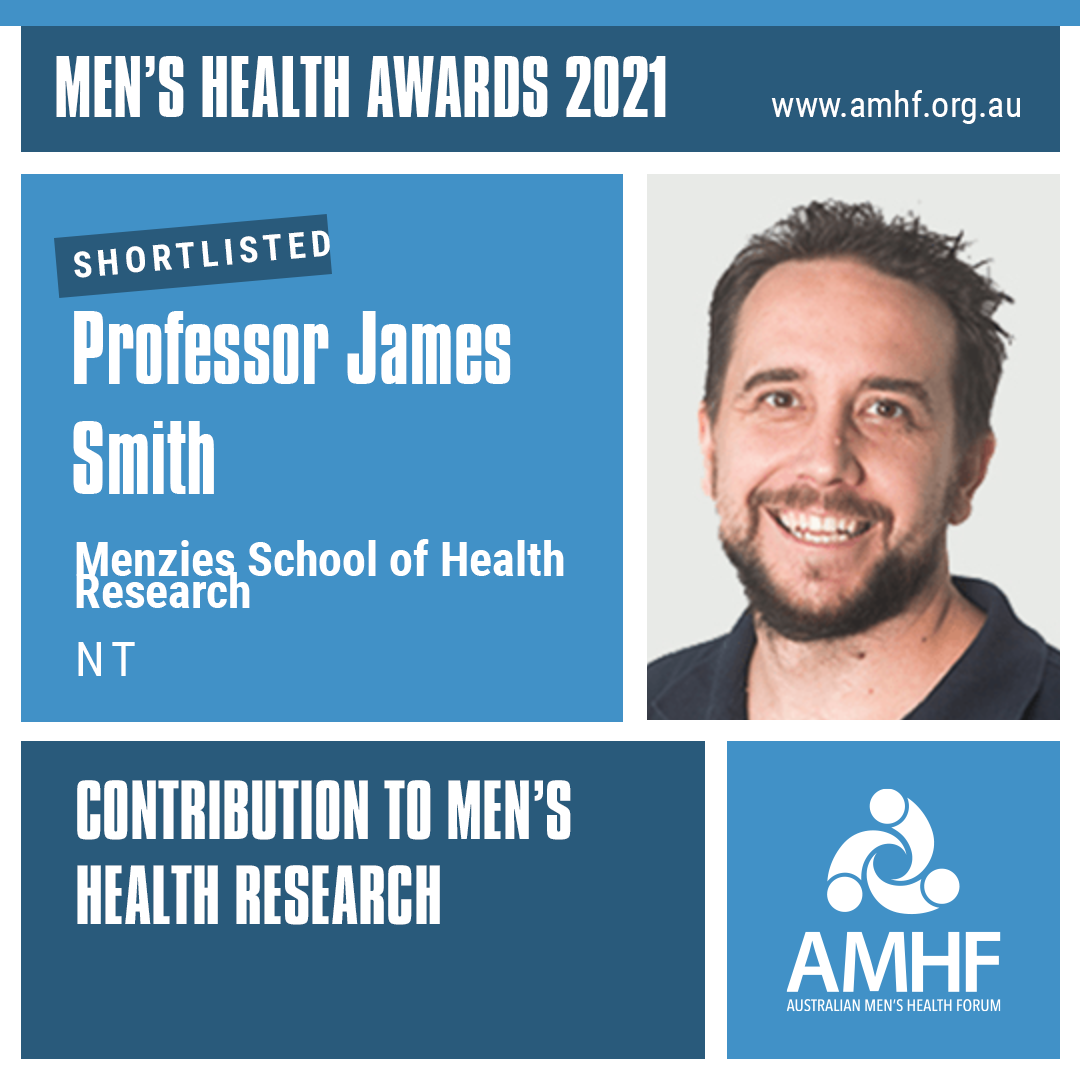 Professor James Smith is the Founding Director of the Freemasons Centre for Male Health and Wellbeing - Northern Territory based at Menzies School of Health Research.

He has worked in the field of men's health for two decades in roles spanning practice, policy, and research contexts. He has written (50+ publications) and presented (100+ conference presentations) extensively on a range of topics relating to men's health.

He has been engaged as an expert advisor in men's health by numerous organisations including the World Health Organisation and the Royal Australian College of General Practitioners. 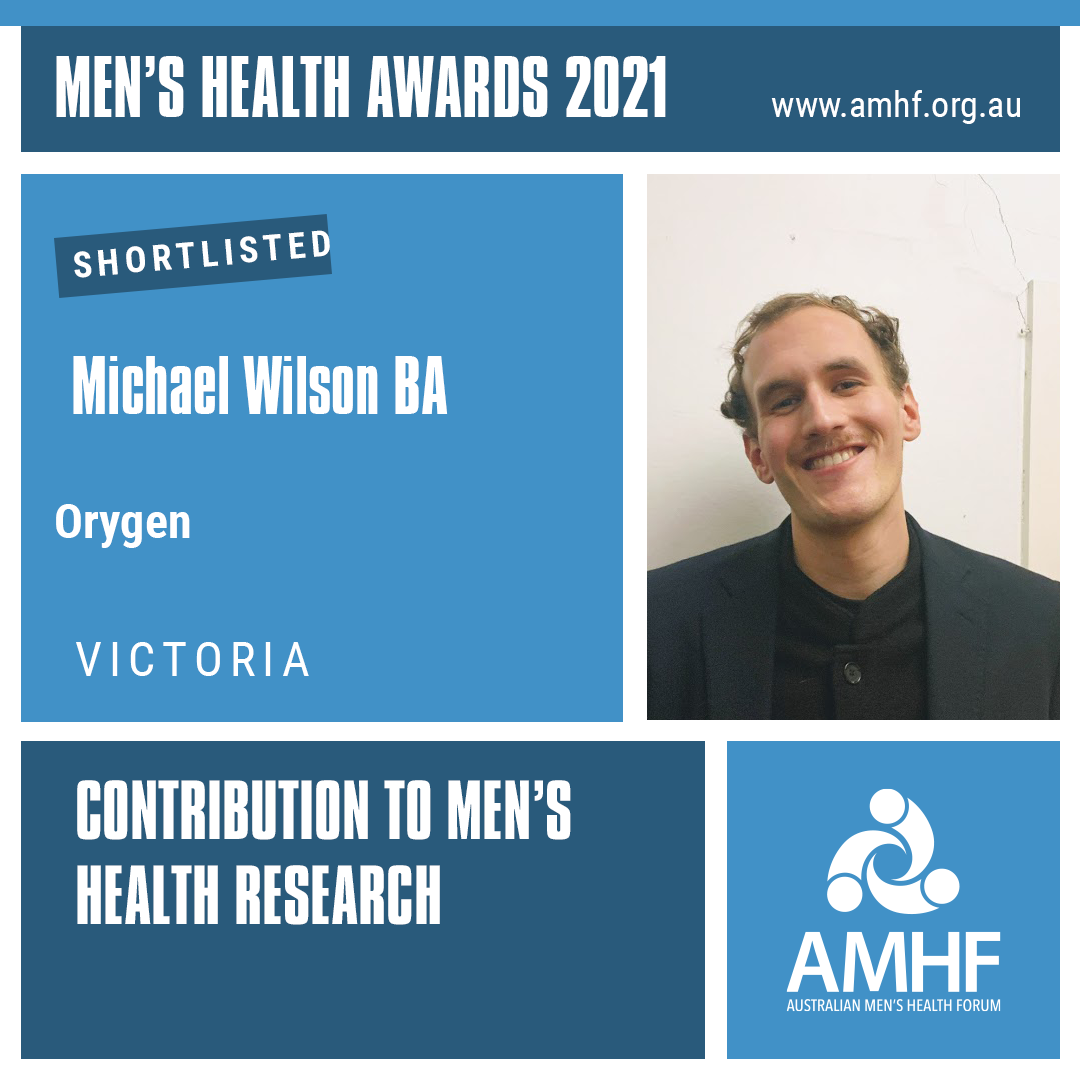 Michael’s has been working in the field of men’s mental health since 2018 and has co-authored seven research articles, with four more in-press.

His work with Dr Ray Swann at Brighton Grammar has involved the design of a framework to define positive masculinity in order to provide young men with a healthy blueprint for a masculinity defined by connection, motivation and authenticity.

Michael has led two research articles from this work, which will inform educational content at the school and more broadly.

More recently, his work under the lead of Dr Zac Seidler at Movember has focused on understanding the experiences of men who have sought mental health care and training practitioners to work more effectively to prevent suicide in men.

This work has involved the successful piloting of a world-first online training program to upskill clinicians in their work with men, involving over 160 practitioners.

VOTE FOR YOUR FAVOURITE NOMINEE