We are announcing the shortlists for the 2021 National Men’s Health Awards throughout Men's Health Week, starting June 14, 2021. Today we announce the nine nominees in the Local Men’s Health Champion category.

This year we are celebrating the work of individual practitioners who work to improve the lives and health of men and boys. We called for nominations for those unsung heroes whose work is making a difference at a local level and have come up with an impressive shortlist of candidates. 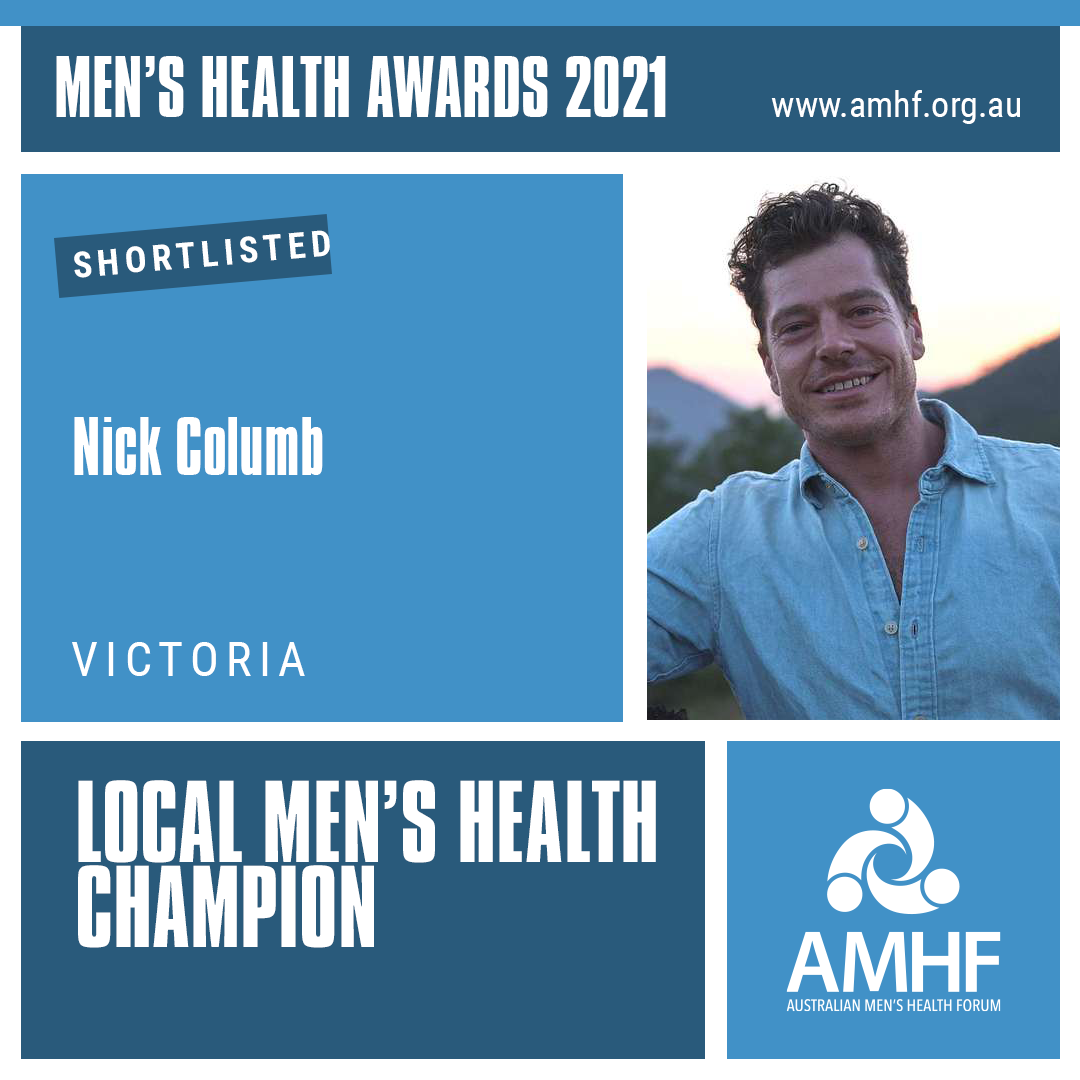 Nick is the founder of the "Sacred Men's Business BBQ", a regular event he runs in Melbourne's suburbs.

The concept of the Sacred Men's Business BBQ is getting mates together in a casual and comfortable BBQ setting, to check in with each other about their lives and mental wellbeing.

Nick says that many men don't feel comfortable attending formal groups or gatherings and don't have a forum or capacity to communicate about where they are at. The purpose of his Sacred Men's Business BBQ is to empower men to make a real difference in their mates' lives in an ongoing basis.

Several men who have attended the Nick’s BBQ’s have set up similar meetings with coaching and support from Nick and the help of “how to” manual he has created. 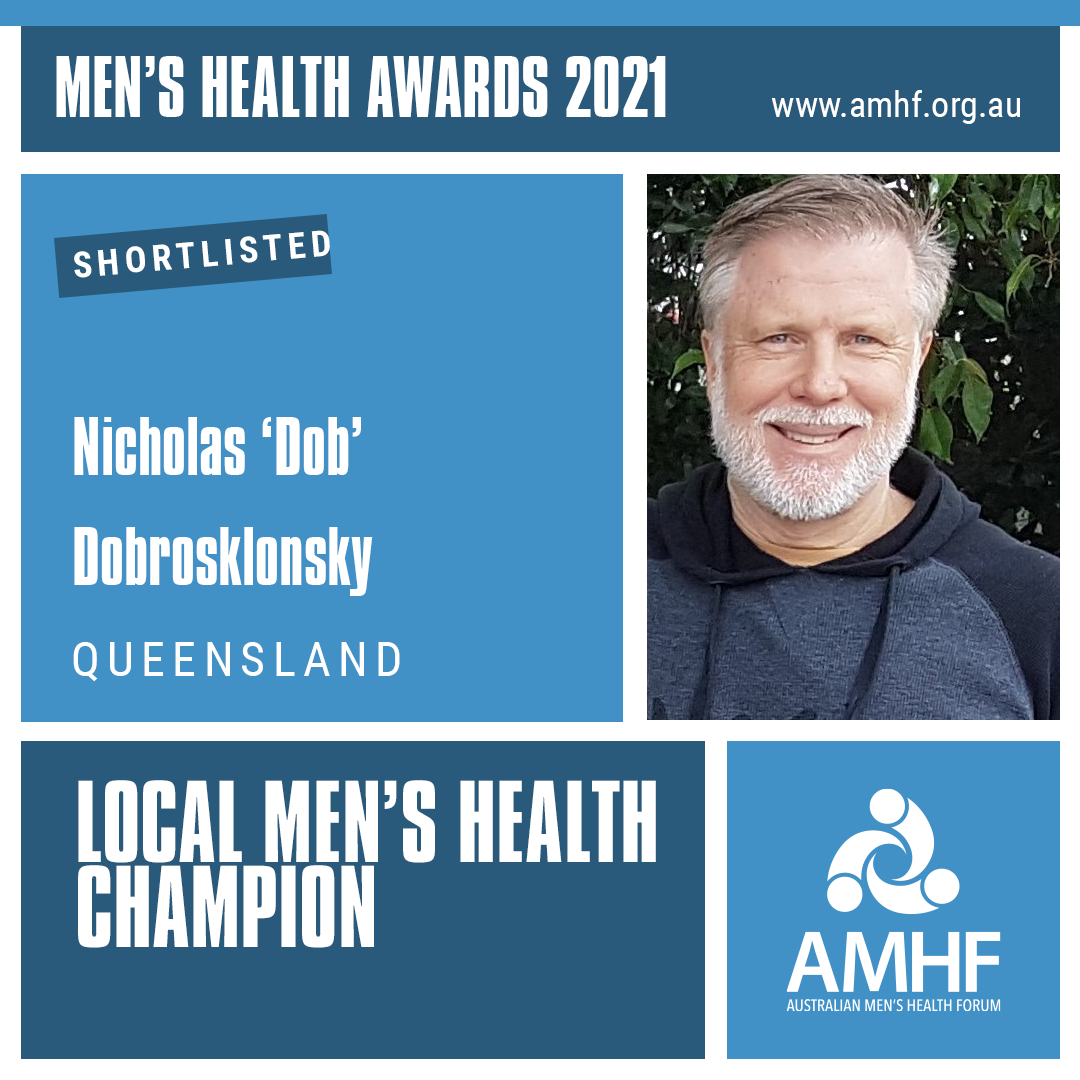 Nicholas Dobrosklonsky (known as “Dob”) is a leading member of Men’s Wellbeing Inc, his has various roles including Coordinator of OMG’s (Open Men's Groups) and facilitator of the popular Common Ground program for men.

OMGs are scheduled monthly in both northern and southern suburbs of Brisbane, on the Gold Coast and online for rural men in remote locations. The groups are a place where any men can come together to make connections, share what is going on in their lives, listen to other men and just "be themselves".

Dob says he is passionate about assisting men to improve their mental and emotional health and generate more zest in life. He believes that, for every man who heals some wounds and learns about himself, the families and community benefits.

Independently, Dob works with individual men through his practice of resilience coaching and trauma therapy, supporting them to overcome their challenges, self-limitations and feelings of despair. 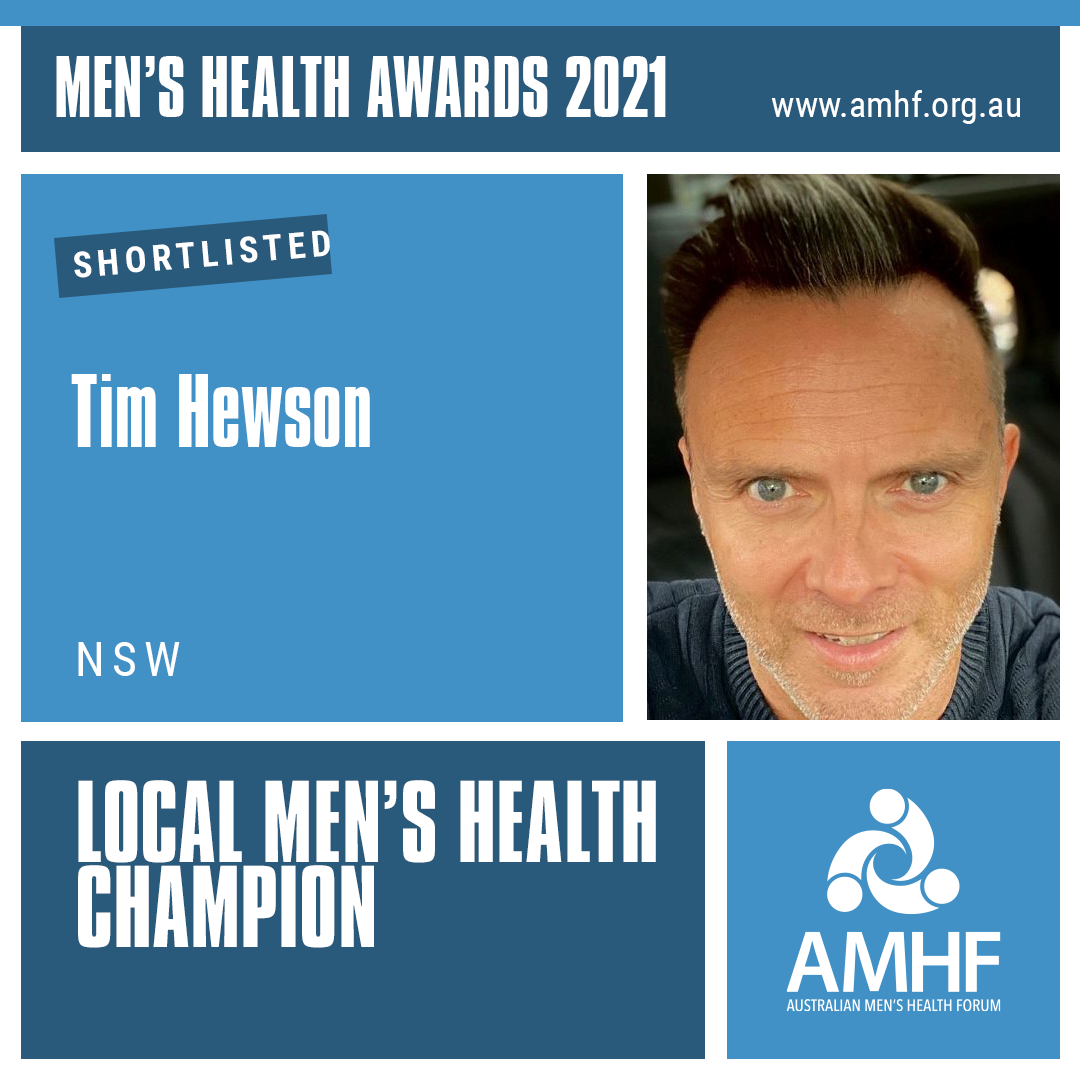 Tim Hewson founded Mongrels Men in Sydney in 2019, as a grassroots community to improve the physical and mental health and wellbeing of men aged 30-65 through sport, fitness, exercise, connection and conversation.

Mongrels Men offers free community activities to create and facilitate opportunities for men to get together and participate in sporting activities to help them build confidence and male relationships.

In the past two years, Tim says he has raised over $40,000 for men’s mental health charities and grown the Mongrels Men community to 800+ men.

Find out more at: www.mongrelsmen.com 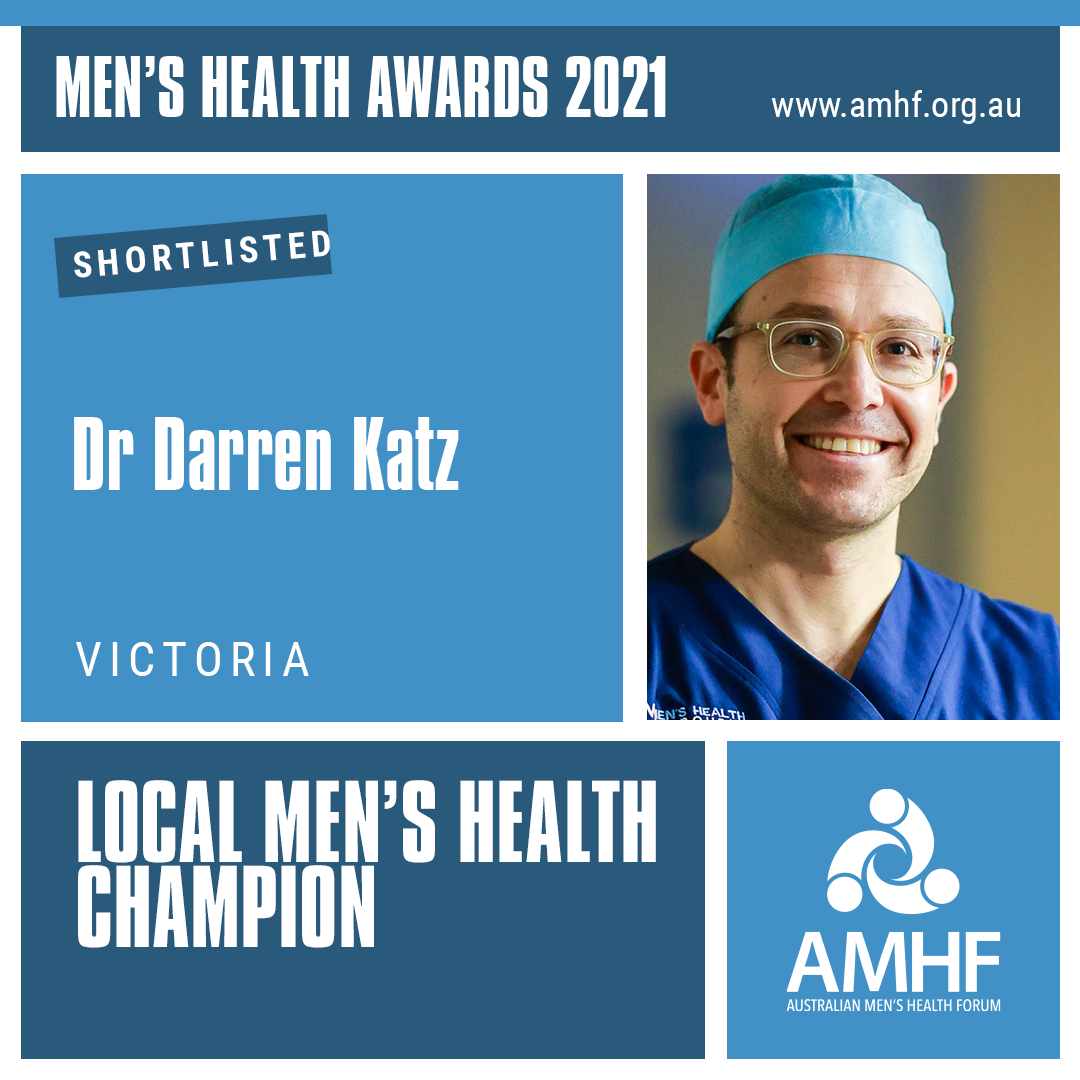 Dr Katz is Medical Director and founder of Men's Health Melbourne urological and men's health clinic; a Specialist Advisor to Healthy Male; and the current Chairman of the Andrology Special Advisory Group to the Urological Society of Australia and New Zealand, where he helps to direct policies and statements related to men's health.

Dr Katz has developed one of the first public hospital andrology clinics in Victoria. He is well known for his mentorship of other men’s health practitioners and including international specialists who travel to Australia to learn some of the highly specialised operations and techniques that he uses to help patients in the areas of men’s health, urology and male infertility.

Find out more at:
https://www.menshealthmelbourne.com.au/dr-darren-katz-urologist-melbourne-cbd/ 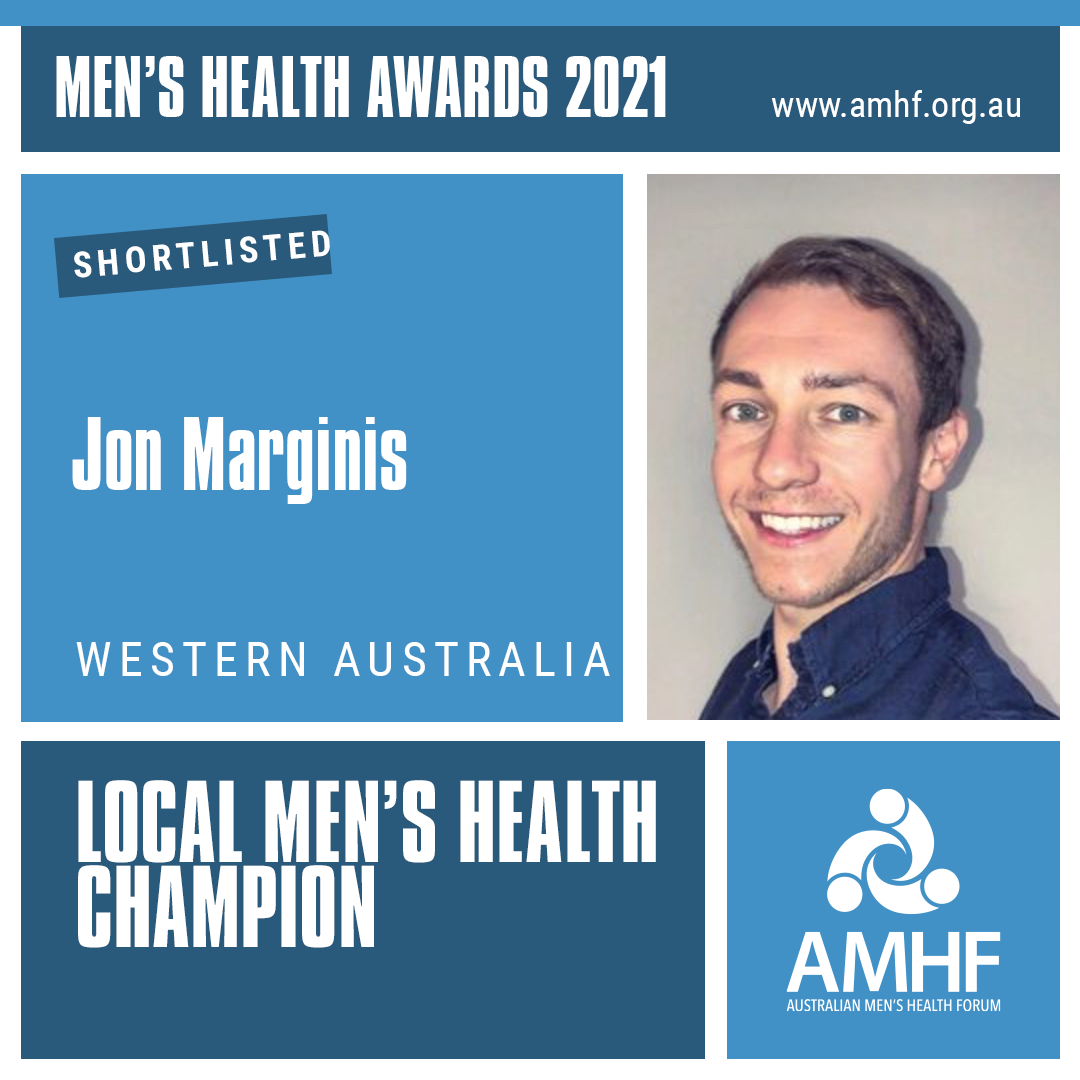 Jon Marginis is a Counselling Psychology Registrar (Psychologist) who has a special interest working with boys and men. Jon works with boys as young as three years of age.

Jon enjoys working with young boys as he views this as a key age in assisting in breaking the stigma that many boys and men feel later in life around what it means to be a male. When working with males, Jon sees it as important they are aware of their emotions, and in naming them and being able to regulate them.

He also enjoys helping them develop a healthy self-identity and positive self-image. In Jon’s role as a psychologist, he has been invited to speak at conferences, write articles, speak to local newspapers and has been interviewed on the podcast “Meditalk” around male mental health. 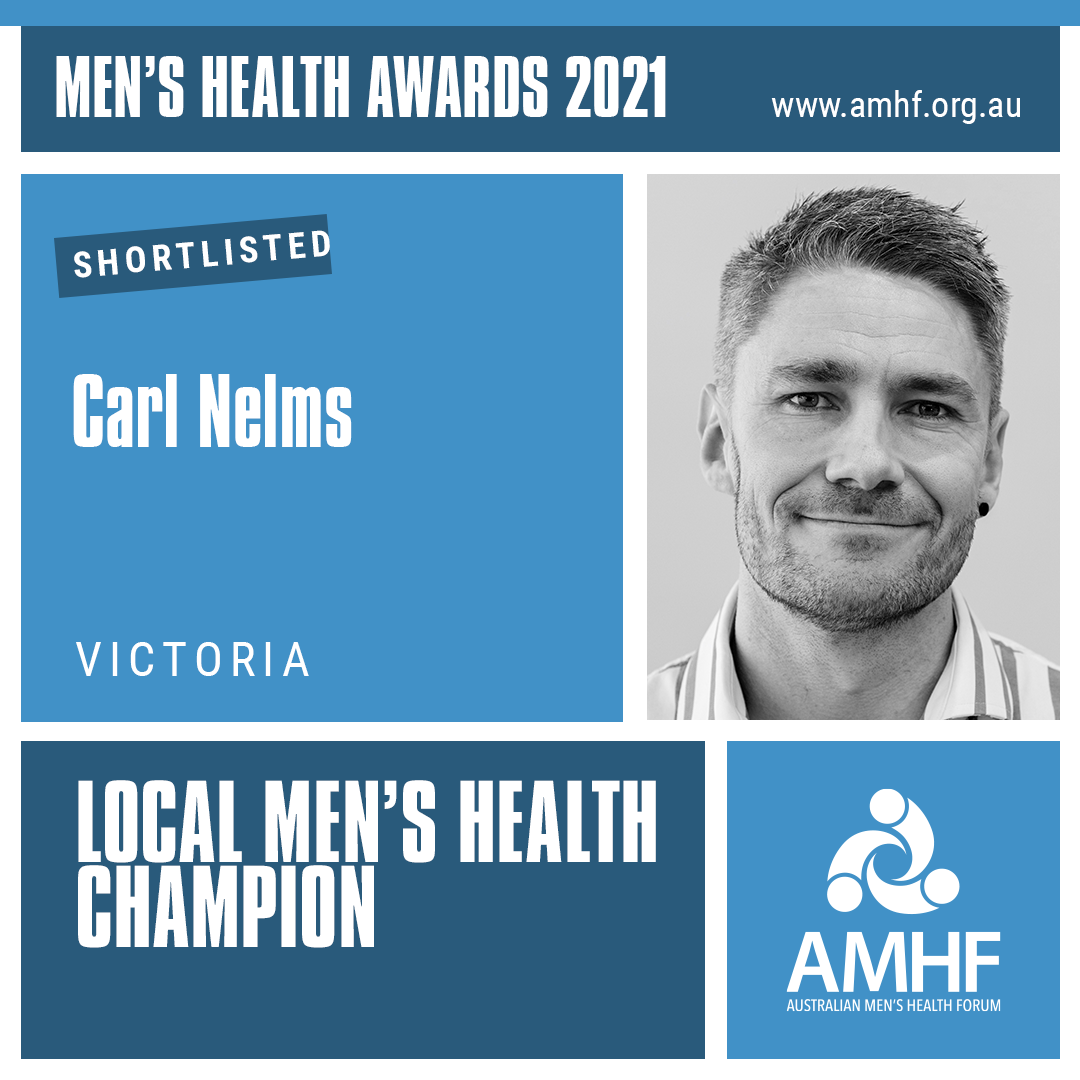 Carl Nelms launched Blokes Psychology in 2018 with the aim of providing mental health support and treatment tailored to the needs to men and boys of all ages.

Carl’s aim is to empower more men to overcome the stigma of reaching out for support and ultimately get the professional tailored help they desperately need. Blokes Psychology has now grown to include a team of passionate individuals, working across two offices in the Southern & Eastern suburbs of Melbourne.

Together they provide psychological services to men and boys locally and throughout Australia.

He says Blokes Psychology is committed to being an industry leader that plays a key role in men’s health promotion and advocacy for men’s mental health within Australia. Find out more at: https://blokespsychology.com.au/ 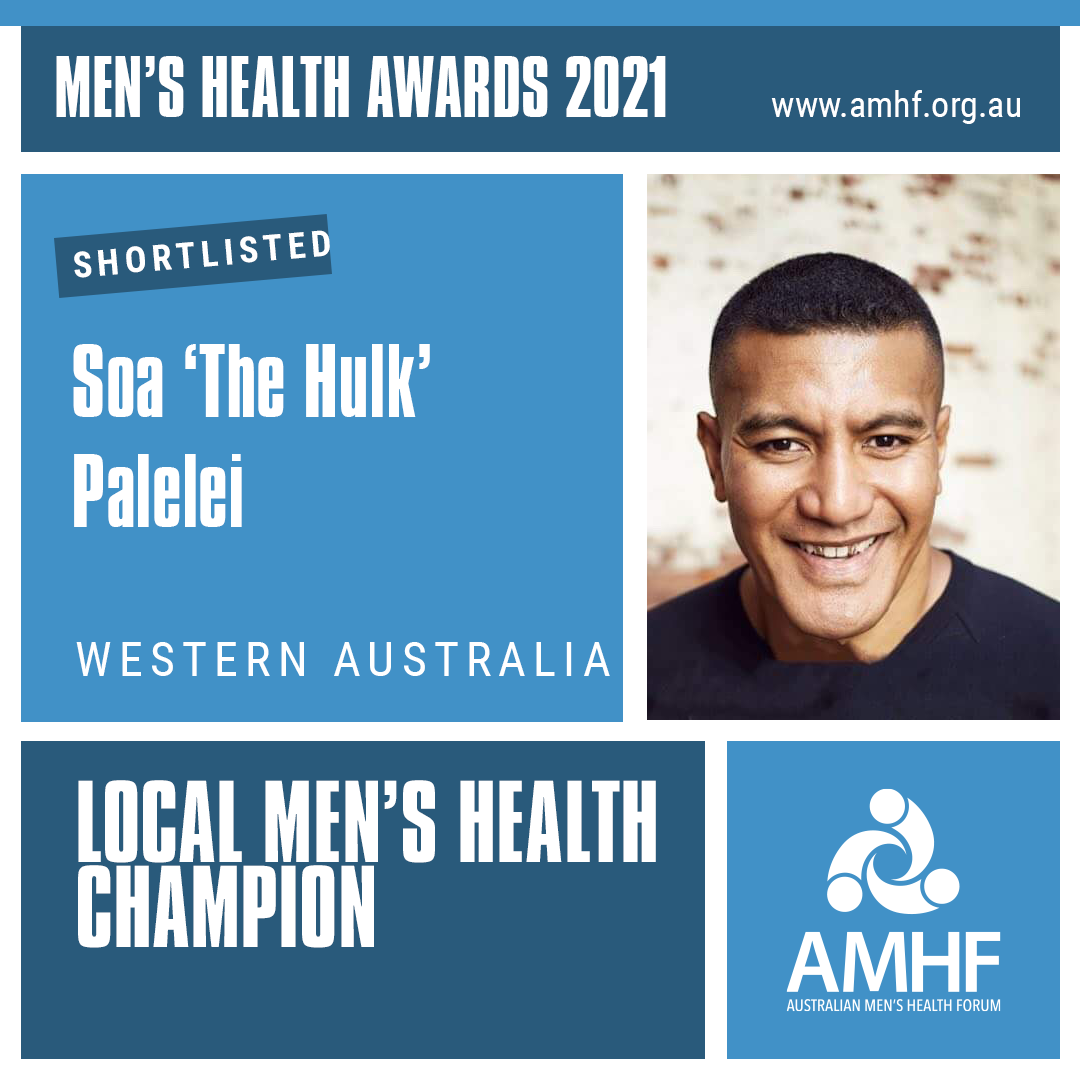 Soa “The Hulk” Palelei is a former professional MMA fighter who is committed to helping communities be more mentally and physical healthy.

In his book, Face Your Fears, Soa wrote about his experiences of being physically abused and overcoming his inner struggles through sport. Writing the book inspired him to start a project of the same name, through which he gave mental health talks to schools and communities.

More recently, he has become the leading wellness ambassador for Strong Minds, Strong Mines, which has given Soa the opportunity to give talks and implement programs aimed at improving the mental and physical wellness of FIFO/DIDO workers.

Through Strong Minds , Strong Mines, Soa says he is working to eradicate the stigma and discrimination that continues to be associated with mental health. He helps male-dominated industries to enhance their existing health and safety management system and improve their workplace culture. 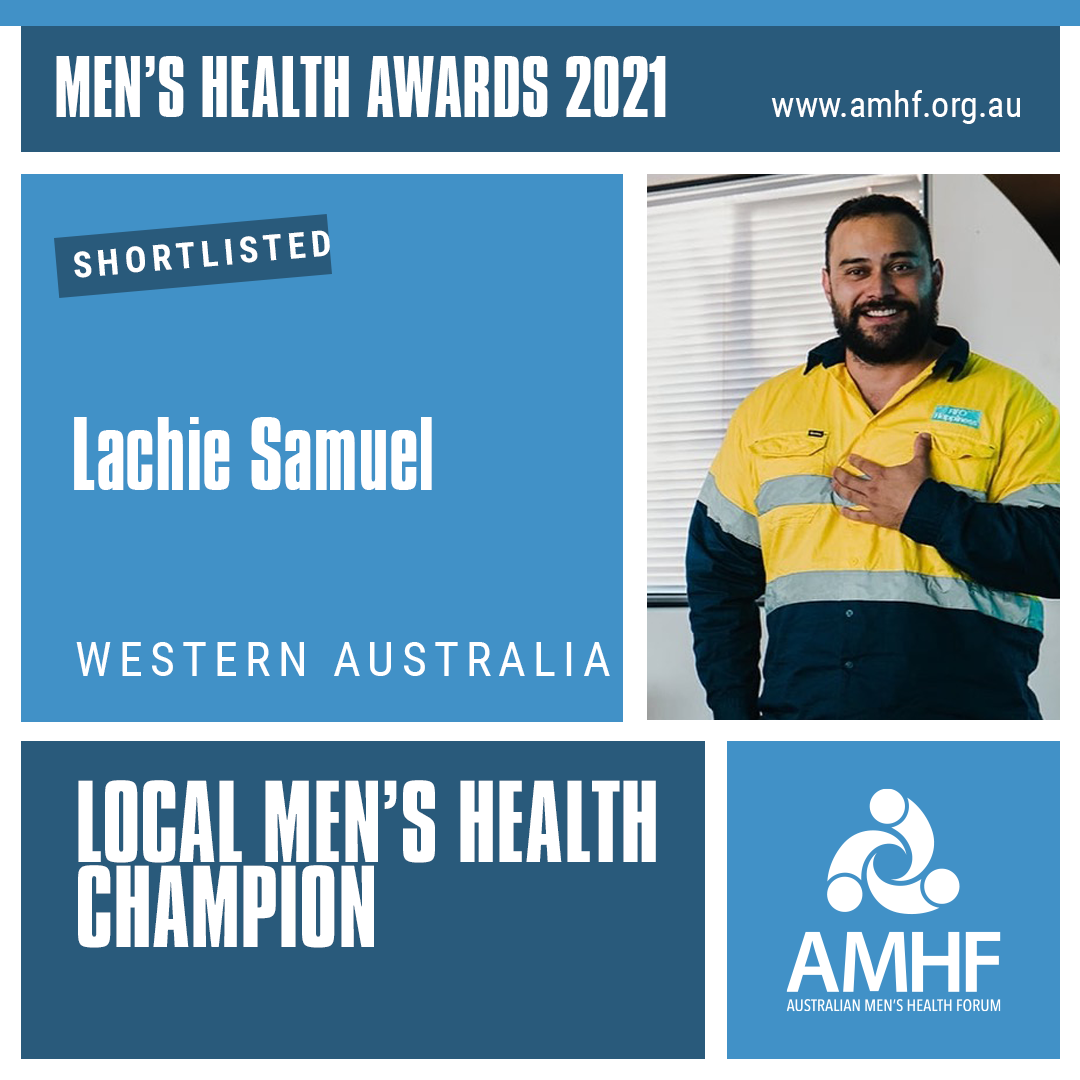 Lachie Samuel is a former FIFO work with lived experience of suicide and suicidality, who is committed to improving mental health and preventing suicide in the FIFO (fly-in fly-out community).

He also co-created the Men’s Work Collective, which helps men’s coaches to host their online courses.

Since leaving FIFO work in 2017, Lachie has recorded nearly 250 episodes of  his “Open Up” podcast, created and hosted two mining mental health conferences called the FIFO Mental Health Summit and Held a FIFO tour of WA, which travelled 6000km around WA delivering 36 workshops across many sites and villages.

In 2020, Lachie partnered with Happiness Co to create FIFO happiness, a non-clinical intervention that combines lived experience speaking with mental and emotional health education. FIFO Happiness now works with a range of mining companies like Rio Tinto, Monadelphous and Sodexo.

Lachie’s future plans include the launch of an Association for Mental Health in Mining scheduled for July 2021.

Find out more at: https://happinessco.org/fifo-happiness/ 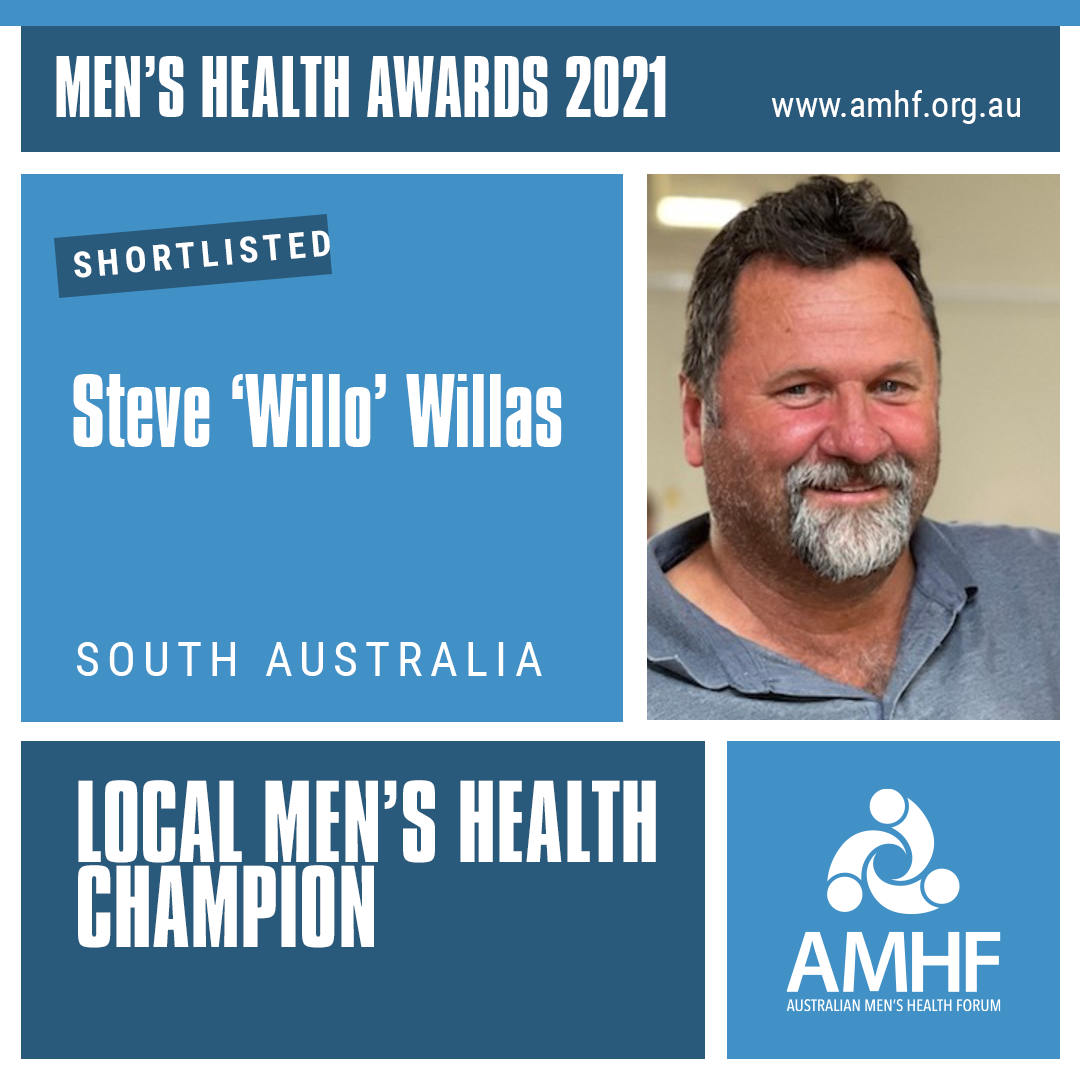 Steve ‘Willo’ Whillas has been a  key driver behind drought and bushfire relief efforts on the Eyre Peninsula and across South Australia. He set up the EPIC Charitable Trust and worked with others to raise money to buy hay for farmers and put on events to bring communities together and boost morale in tough times.

Willo provides financial and well-being support to local communities under the South Australian Primary Industries and Regions initiative. He does this work in addition to running a grain trading business.

His nominator said: “Steve will drive hours to sit with someone in their time of need or talk on the phone at all hours of the day. He gives tirelessly of his time and has saved many lives. In particular, he is a huge support to the men on the Eyre Peninsula as he can communicate with them and understands their issues across agriculture, fisheries and more.”

Steve’s compassion and empathy are second to none and he provides a smile, a friendly ear, and a strong shoulder for so many men.

Find out more at: https://www.portlincolntimes.com.au/story/5694096/epic-trust-ready-to-help-eyre-peninsula-farmers/

VOTE FOR YOUR FAVOURITE NOMINEE HERE