Dr Whitley, associate professor in psychiatry at McGill, prefaces the book with some well-travelled facts about men’s mental health: that men make up around 75% to 80% of all completed suicides; that men account for three out of four cases of substance use disorder; that men still tend to under-utilise mental health services.

“All this has led researchers, commentators and journalists to describe men’s mental health issues (and male suicide, in particular) in ominous terminology: a “silent epidemic,” “an invisible crisis,” “a quiet catastrophe” and “a gender gap that is a matter of life and death.”

The term “Men’s Issues” has evolved to encapsulate issues disproportionately experienced by males including homelessness, incarceration, mental health and the examination of trends and patterns within various sectors of society to assess the experience of men and boys.

“It is my intention to stretch and enrich existing work on the topic, avoiding a narrow focus on any one discipline or singular concept, instead examining the wider social context and broader cultural trends.”

Throughout his past research into women’s mental health, Dr Whitley says he was often asked my female research participants, “What are you doing for our men?” He was also contacted by widows, mothers, wives, daughters and other women expressing concern for men’s mental health along with a variety of men across the world, “who have seen themselves or their loved ones struggle with mental health issues.”

The book is written for those working in fields related to men’s mental health, but is also accessible for men and women who may lack specialist knowledge, “but are motivated to inform themselves about core issues.” 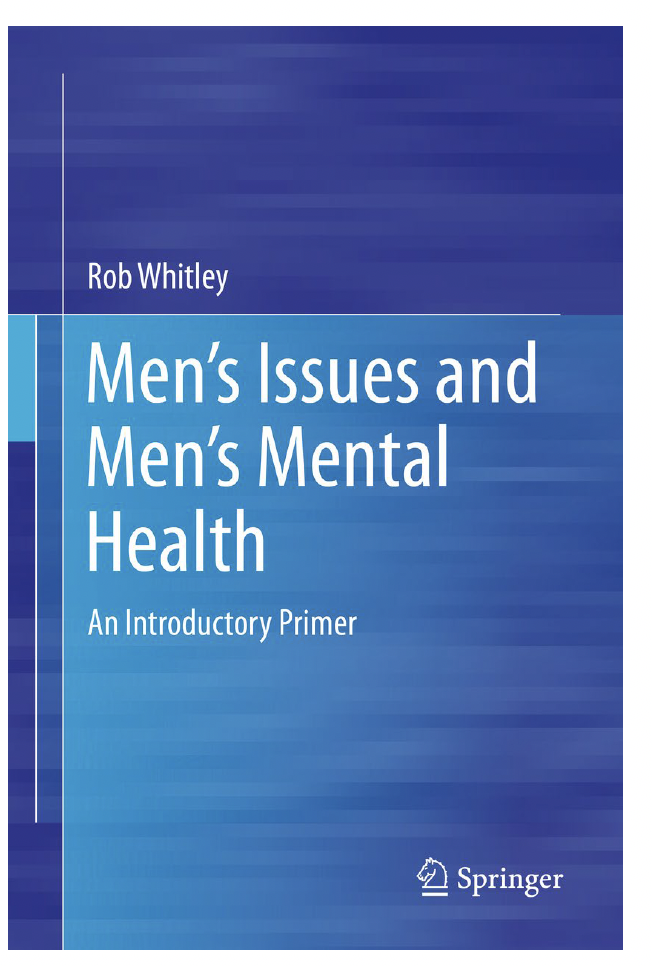 The book took Dr Whitley 12 months to write. Core arguments of the book are that existing approaches to men’s mental health inadequately address the issue.

Key overarching themes are: male gender blindness, the gender empathy gap and its consequences for men’s mental health, negative stereotypes of men, male unfriendly educational system and ‘failure to launch’ in young men, the influence of economic change on factors such as substance abuse/suicide, workplace issues leading to prescription of pain killers and vicious cycle, the negative impact of unexpected life transitions on men’s mental health, the lack of male-friendly and male-sensitive programs and supports, different modalities of healing such as Men’s Sheds and the importance of strengths-based rather than deficit-based approaches.

Dr Whitely calls for more choice and a reform of the health care system. He says social determinants of men’s mental health must be addressed.

“The official mental health system undoubtedly has a role to play, but locally grounded community-driven programs must also be tasked to help vulnerable men, especially as research indicates that men often prefer such grassroots programs and informal spaces.

“This can include local peer support groups, faith-based organisations, or other non-profits. Such organisations are well placed to address the loneliness, social alienation, and diminished sense of meaning and purpose in life that is often implicated in male suicide.”

“Many of the most promising male friendly practices such as Men’s Sheds are arising from the community and civil society, rather than from official health services. As such, these highly effective and popular small-scale, locally grounded, community-programs are often run on a shoestring budget with few paid staff and an annual scramble for funds to ensure their continuity — a situation made worse by the COVID-19 pandemic.

“This is worrying, as such programs have often evolved organically to ably serve their communities, complementing the local mental health system by providing tailored and holistic services to men and other hard-to-reach populations.

“Contraction or termination of such resources can leave a gaping void in local communities, with negative consequences for affected service-users. As such, discussion about long-term funding and support to Men’s Sheds, Veterans’ peer support organisations and other similar community programs must take centre stage when considering new ways to promote men’s mental health. We can support grass roots organisations with long term stable funding. Instead of forcing community groups to reapply each year, we should be modelling our funding in five-year increments.”

OPTIONS TO PURCHASE THE BOOK

VIEW THE PROMOTIONAL FLYER FOR 20% OFF PRINTED BOOK or EBOOK