Nurses Give Tips On Working With Men

Conversations about improving men’s health often focus on how to get men to talk and how to encourage men to get help. A new report from the UK turns this conversation on its head by offering best practice advice to nurses on ways to talk with men about health issues, as well as providing guidance to nurses on how to deliver effective health services to men.

The report is based on the findings of 16 nurse-led projects that were funded to improve men’s health by promoting better self-care and reversing the negative impacts of undetected and untreated longer-term health problems. The issues covered included:

According to the report’s author, Peter Baker, who is Director of Global Action for Men’s Health:

“It is very clear that programmes that take account of gender differences and male sensibilities are much more likely to work than many ‘one size fits all’ approaches. This has been obvious to commercial organisations for many years which is why, for example, Pepsi and Coca Cola introduced Pepsi Max and Coke Zero respectively to complement their ‘Diet’ brands which mainly appealed to women.

“Traditionally, health-related work with men has focused on their ‘deficiencies’ and tended to blame them for their health problems. There is a recognition that, far from all men being simply ‘reckless and feckless’, many are already interested in health and actively engaged in self-care and self-management and that significantly more men would do so if provided with the right opportunities.

“The most effective approaches acknowledge men’s difficulties with respect to their health but attempt to build on their strengths and to work with them in a positive and supportive way. It’s important to treat men with respect. Most men will respond well not to disapproval but rather to genuinely positive and enthusiastic interest and concern.” 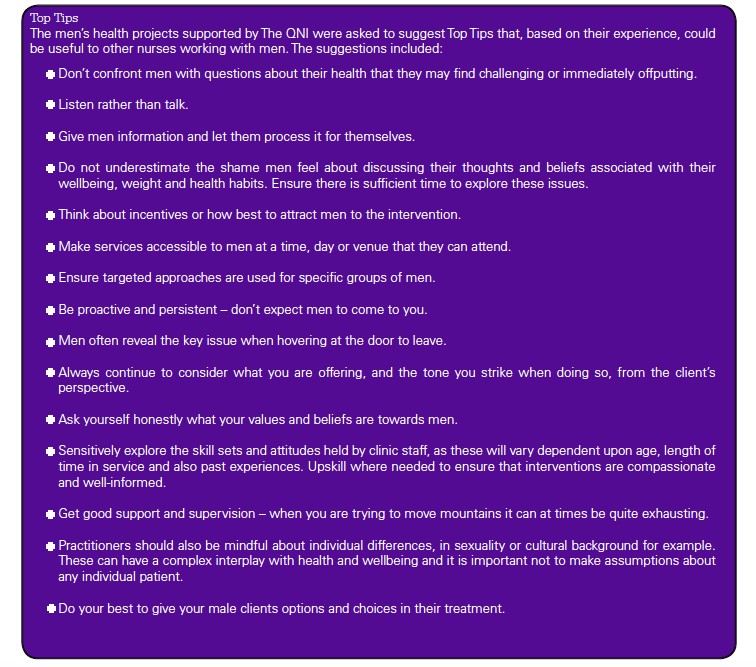 The report includes guidance to nurses on working effectively with men, which includes using the ‘right’ language such as talking about ‘healthy eating’ rather than dieting or ‘stress’ rather than ‘mental health’.

It also includes tips from the nurses involved with the projects which include: