Australia has one of the least effective parental leave systems for dads with men accounting for less than 1% of parents who receive leave and benefits, according to a new global study on fatherhood.

This falls significantly short of the global average of 18% and is in stark contrast to Sweden, Iceland and Portugal where men account for nearly half of parents who receive publicly administered leave and benefits. 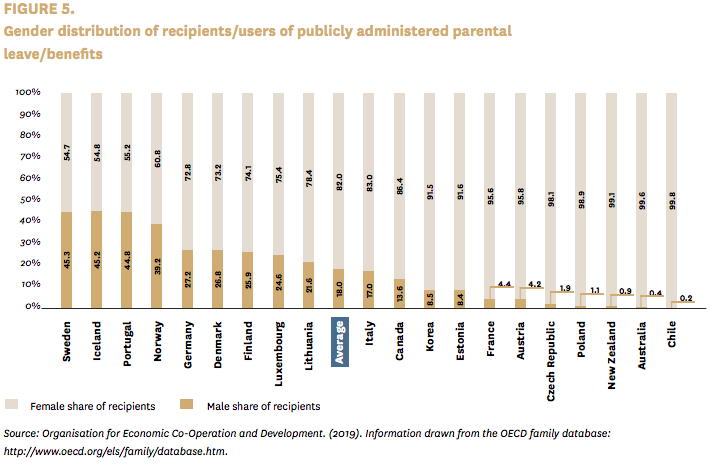 The report - State of the World's Fathers 2019 (PDF) - claims that involved fatherhood improves men’s physical, mental, and sexual health and reduces risk-taking and that sweeping changes are needed to laws and policies, such as parental leave, to give dads more choices.

The report states that parental leave for fathers contributes significantly to transforming deeply rooted inequalities between men and women and builds better relationships between fathers and their children.

Paid parental leave, as currently constructed, only benefits those in paid employment and does not generally provide benefits for the millions who work in the informal sector or are self-employed, says the report.

Leave policies for fathers include paternity leave, which offers a father the opportunity to take time off from work after the birth or adoption of a child, and parental leave, which refers to leave available to either or both parents that allows them to take care of an infant or child.

“To achieve gender equality both in the workplace and the home, it is essential for men to have an equal chance to be there with their newborn babies.”

Gobally, however, fathers are still allowed little, if any, official leave at the birth or adoption of a child, according to the report. Paid maternity leave has been enshrined in key United Nations and ILO conventions and is now offered in all but eight countries in the world

According to a 2019 World Bank Group report, only 90 out of 187 countries provide any paid paternity leave that new fathers can take as a matter of national policy. Even in these countries, it remains common for these leave provisions to be shorter than three weeks, often only a few days, say the authors.

The authors say that sweeping changes are needed in the legal realities and the policy environment that shape women’s and men’s opportunities and choices, as well as children’s lives. In particular, providing equal, fully paid, non-transferable parental leave for all parents is central to setting the foundation for fathers’ involvement with their children from an early age, they say.

The repot claims that the most effective parental leave policies are those that include a non-transferrable portion for fathers, sometimes referred to as “daddy days,” where the father either uses these days or loses them entirely (that is, he is not allowed to transfer them to the mother).

According to the authors, if leave is not specifically designed for fathers or is not adequately remunerated, few fathers actually take it. Longer parental leave, with paid, non-transferable days for fathers, is the most effective in encouraging fathers to take leave and in supporting families toward greater equity between men and women, they say.

In Canada, for example, 2 in 5 dads take no time off after the birth of their child but this falls to 1 in 5 in the province of Quebec, where fathers are exclusively entitled to five weeks of leave,

Advocating for dads in Australia

In Australia, Parents At Work is advocating for change. They say dads want to be more involved in their children's lives and employers can do more to help dads balance work and family.

The case for change is outlined in a White Paper (PDF) called "Advancing Parental Leave Equality and Introducing Shared Care in Australia".

The ACTU is also campaigning for new families to be given a right to 26 weeks of shared paid parental leave that is equally accessible to mothers or fathers.

Resource: State of the World's Fathers 2019 - Unlocking the Power of Men's Care (Promundo)

Read: Want men to share parental leave? Just give them equality (The Guardian)