NSW 2012 scientist of the year Professor John Aitken knows a great deal about fertility - in men and women.

The Chair in Biological Sciences at the University of Newcastle has specifically been paying attention to male infertility and the long-term damaging impacts of environmental, physical and social factors, such as smoking, dietary choices, carrying a mobile phone around and excessive exposure to herbicides and pesticides.

But to really arrest the decline in childbirth in Australia, and the fact that 1/20 men are infertile and 5% of the population relies on artificial assistance to get pregnant, Prof Aitken has a simple and bold message: have children earlier.

“We live in denial of our biology,” Prof Aitkens said in his opening keynote address to the Australian Fatherhood Research Symposium in Melbourne last week.  “In the end we have to wake up to what we are as a species.

Prof Aitkens gave delegates an overview of the current trends in fertility, highlighting the fact that the average Australian woman starts having children at 30, and the decline in fertility is rapid for females between the ages of 35-40. A second dominant factor in the nation’s slowed population growth is male infertility.

“At least 1 in 20 males is sub or infertile,” he said.  “In fact most men are sub-fertile. It’s a  situation that is probably getting worse with the passage of time.”

“To fertilise an egg is an enormously complex event. Semen quality is declining very fast.”

While a couple could spend 10 years and thousands of dollars on IVF trying to have a child with often a strong focus on female infertility, Prof Aitken said the medical profession was not specialised to offer the same diagnoses for complex male reproduction issues.

“It is not recognised as a discipline,” he said. “Female infertility is due to endocrinology, it’s not an endocrine problem in men … andrologists can’t recognise the defects of mutant sperms. “

He also warned against the reliance on assisted fertility, such as ICSI (Intracytoplasmic sperm injection (ICSI) and IVF (In Vitro Fertilisation).

“The more we use assisted conception in one generation, the more we shall need it in the next.”

“You’re making sure that those fertility genes are staying in the population.”

While women’s fertility declines rapidly after the age of 35, for men the consequences of delaying children are more connected with genetic mutations such as schizophrenia, austim, bipolar disorder and dwarfism.

The more men wait, the more DNA damage is likely to be in their sperm, some of it the result of diet and pollution, “some of it we do to ourselves.” 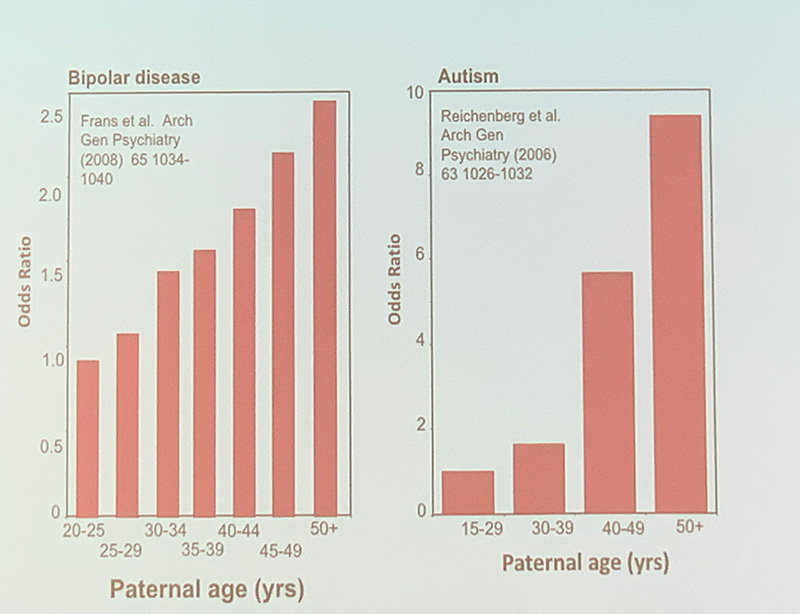 “If you’re a male and you smoke heavily your whole body is under oxidated stress."

Smoking produces damage in your germline. “A lot of us are carrying with us the legacy of grandfather’s pipe-smoking habit.”

He said the electromagnetic radiation that comes out of  mobile phones increased in free radical generation, even if that phone was in a hip pocket. “Large exposure to mobile phone radiation can cause DNA damage,” he said.

“A mobile phone is pulsating radiation all the time, even in your pocket.” 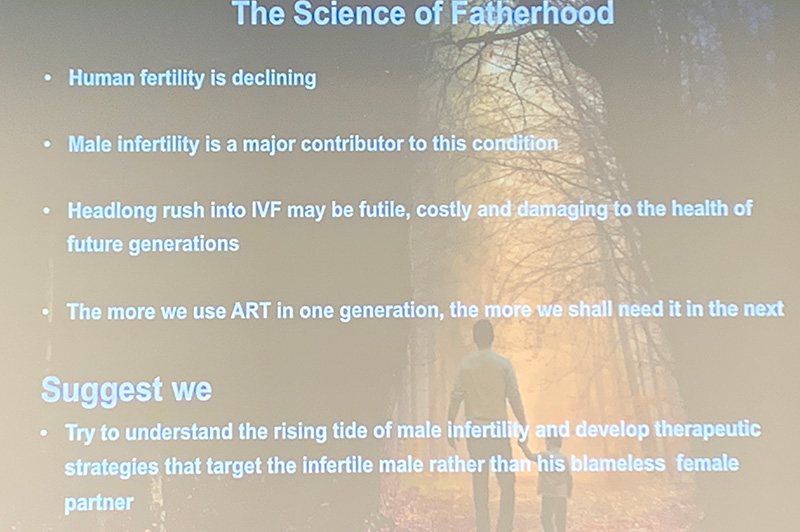 Summary of Prof.Aitken's address to the Australian Fatherhood Research Symposium at Deakin University, Melbourne on May 2, 2019.

Support involved fatherhood: get involved with the #BETTER4MEN campaign (AMHF)