The Prime Minister’s National Suicide Prevention Adviser has called on all Governments in Australia to make preventing male suicide a priority.

Christine Morgan was appointed to the new role by Scott Morrison in July 2019. Her final advice to the PM was published last week and includes a strong focus on tackling male suicide.

One of the key shifts that Ms Morgan has called for is for suicide prevention efforts to specifically target groups that are disproportionately affected by suicide, with a particular focus on Aboriginal and Torres Strait Islanders and men.

The report recommends that all jurisdictions “commit to identifying priority actions for male suicide prevention to be incorporated into the National Suicide Prevention Strategy”.

The involvement of “all jurisdictions” is seen as a key enabler as all levels of government (Commonwealth, State/Territory and, increasingly, local government) invest significant funding into suicide prevention in Australia.

With this in mind, Ms Morgan has made two specific recommendations to drive work to prevent male suicide:

The National Suicide Prevention Adviser has led an extensive consultation over 18 months taking guidance from people with lived experience of suicide, all Australian government portfolios and every state and territory government.

In addition, Ms Morgan and her team have engaged with a broad range of stakeholders, including suicide prevention organisations, medical and allied health and mental health peak bodies, local governments, Primary Health Networks, Aboriginal and Torres Strait Islander people, and members of the Adviser’s Expert Advisory.

As part of the process, the Australia Men’s Health Forum has worked hard to ensure the voice of men and the men’s health sector has been heard. In 2020 AMHF commissioned research into men’s lived experience of suicide to inform Ms Morgan’s work.

In addition, AMHF’s CEO, Glen Poole, was a member of the Adviser's Expert Advisory Group.

He said: “For at least two decades, men’s health advocates have been calling for the national drive to prevent suicide to look beyond mental health and place more focus on the social factors that put men at risk of suicide.

“Ms Morgan’s report supports that position, calling for a cross-government approach to suicide prevention that extends beyond health portfolios and targets men as a priority population.

“The hard work is yet to come and now, more than ever, we need all Governments in Australia to consult and work with the men’s health sector to ensure they deliver the recommendations made in this report.”

Register for Men’s Health Connected Online Gathering Day 1: Men's Mental Health and Suicide Prevention on May 10, starting at 9.30am AEST. 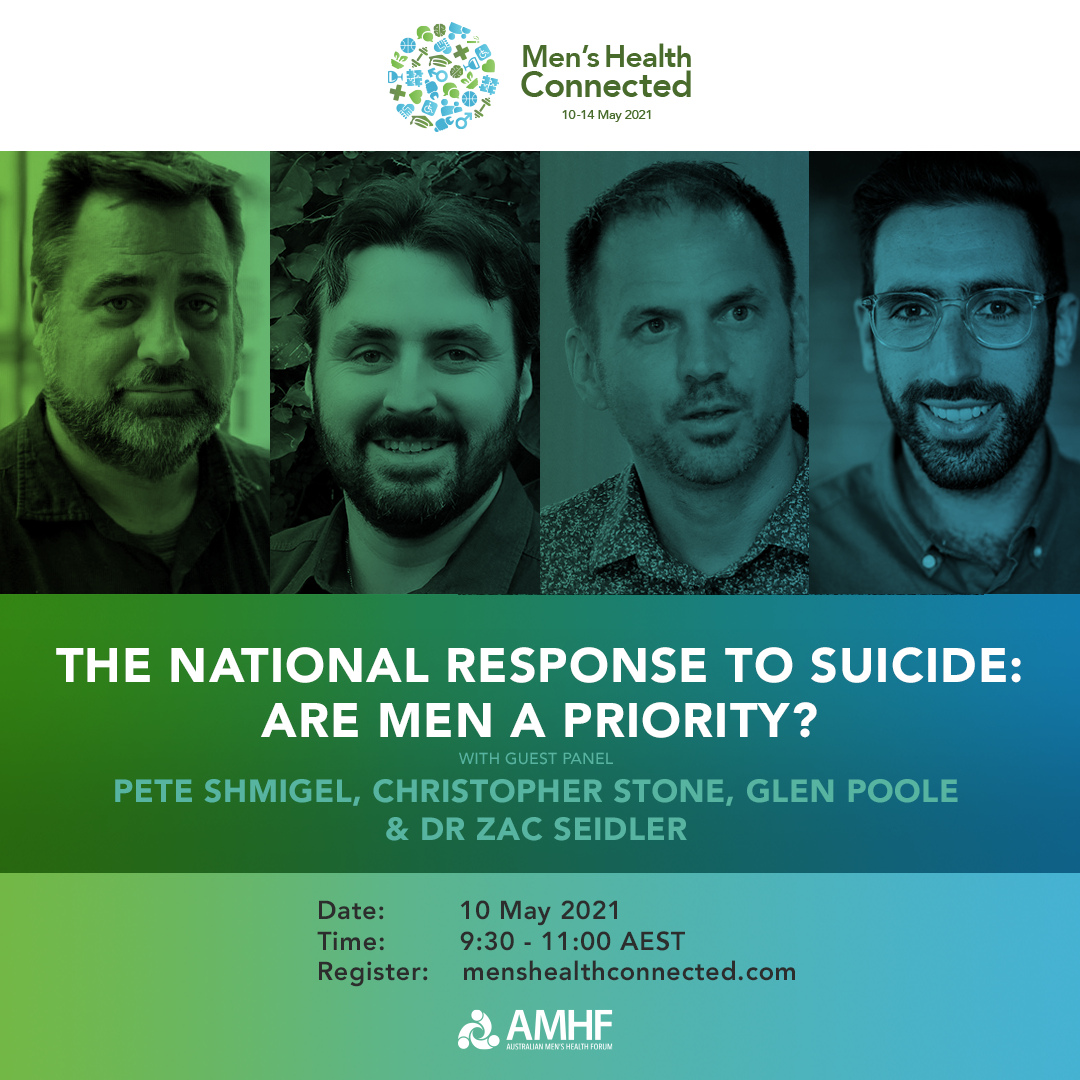