Prick ‘n A Pint puts a focus on preventative health

Rebecca McGowan doesn’t mince words. The super-charged rural doctor, who runs a beef farm with her husband at Yackandandah in north east Victoria and a general practice at Wodonga, wants to change the current paradigm around men’s health.

The current narrative, she says, is too focused on prostate cancer, which is difficult to detect, treat and manage.

“Prostate cancer is one of the worst things we can focus on for men’s health because it’s not preventable and it’s not nearly as treatable as ischaemic heart disease or cardiovascular disease in general, which kills 50 per cent of men and a third of those deaths are sudden. It is preventable and it is manageable.”

Prick ‘n A Pint was conceived in 2015 when local man Steve Mattner ignored the warning signs and died of prostate cancer. His devastated son, Chey, wanted to do something to change what he believed was a male tendency to ignore serious medical symptoms.

A group of like-minded supporters, with experience in marketing, law, business and medicine, supported Chey in his quest and started Prick ‘n A Pint (PNAP) to raise health literacy among men.

The format of the meet-ups was simple: blokes would gather at a local pub, bring in their latest medical tests, listen to McGowan decode the results, and hear what could be done to avoid an untimely end.

“Our passion is to help educate men about their health. To demystify the concept of health. And to bring prevention to men,” she says. “I know as a GP that 80% of deaths are preventable.

“Most men don’t really understand about heart disease and strokes and they really don’t understand their role in managing it.” 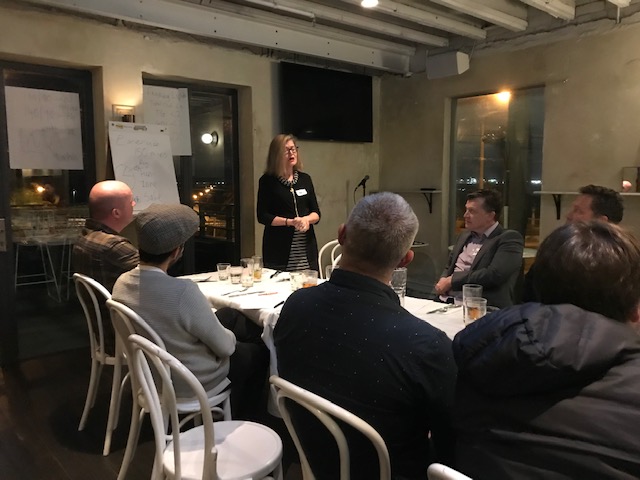 Dr McGowan gives a health talk as part of the Prick 'n A Pint program.

Since the program kicked off in 2016, 12 groups have emerged across Victoria supported by a team of voluntary GPs. They don’t give presentations or power points: each meeting is assigned a ‘captain’ who contacts three blokes to join the group, who are encouraged to invite three friends each, so everyone knows at least one or two people when they show up.

Based on the book club model, they meet once a month in a nice pub environment to talk about a different medical topic and are encouraged to bring along pathology results from their most recent check-up.

The doctors explain what the readings mean, and what - on a green, amber, red scale - “good looks like and what bad looks like.”

The men are actively engaged, clutching their own set of blood tests and reflecting on their own behaviours.

Concrete medical results are gathered beforehand so that men can assess their cholesterol range, or waist circumference, or – in the case of mental health – how much they sleep they have and how likely they are to be experiencing depression based on the K10 Kessler Psychological Distress Scale used by Beyond Blue.

“It’s quite tangible and the men can have a look at it and say, where am I?  This gives men the confidence to assess where they are and to know what they can do with it.

Prick ‘N A Pint hopes to grow exponentially over the next few years with 250 to 300 groups across Australia and the development of an app to support medical education and prevention.

On November 20, on the heels of International Men’s Day, the first Prick ‘n A Pint group in Melbourne will gather after 10 months of get togethers at the Esplanade Hotel in St Kilda. 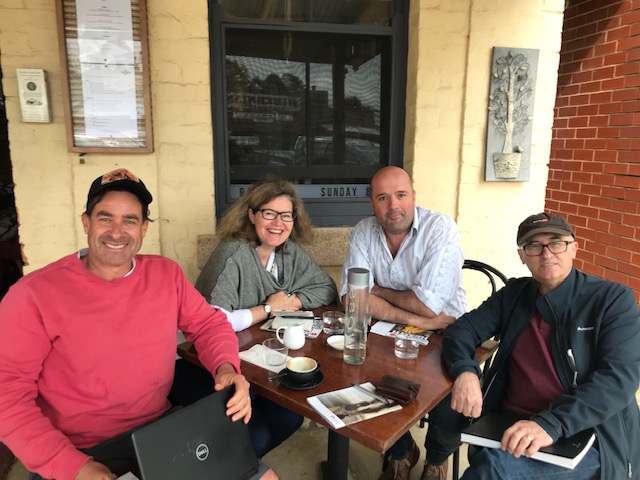 Men can expect to play bingo with pepitas and will be asked several questions until someone’s board is full. For example, ‘Have they had a health conversation with someone in the family?’ or ‘Have they got together with a mate without having an alcoholic drink?’

These small measures, combined with sound medical information and the setting of achievable goals, are at the heart of Prick ‘n A Pint.

“The prick is they go to their GP beforehand and the pint is a drink afterwards,” says Rebecca.

The meet-ups take place in a pub, “because that is where men feel most comfortable” but moderate drinking during the health sessions are part of the agenda.

“We role model moderate drinking. You have a pint, stop at two,” she says.

And will there be an equivalent program for females down the track, leading back?

In 2018, the University of Melbourne, Department of Rural Health, released a research report on Prick ‘n A Pint, involving 10 men aged 42-73 who had participated in the program.

“Most men reported some degree of behavioural change which they attributed to the PNAP experience, with all reporting an intent and increased motivation to engage in healthy lifestyle behaviours,” reported researchers Ms Georgia Ramsden, Dr Alana Chambers and Dr Helen Haines.

The men said they felt trust in the group and a sense of control which enabled them to recognise their vulnerabilities, "which then let to a process of change".

“In the future, health promotion programs aimed at men may benefit from consideration of how vulnerability and power can be addressed through establishing trustful relationships between men themselves and between men and health care providers,” they concluded.

“Men were motivated to join and stay with the program for personal, family and social reasons and they reported improvements in their health literacy and behaviour.”

Find out more about Prick 'n A Pint