It was about that time nursing schools in the US started opening the doors to men after the Supreme Court deemed it unlawful to discriminate against them in 1982.

Since then, reports The Good Men Project men have broken through gender barriers, particularly in healthcare and the numbers are growing.

“More and more people see gender as something that’s superficial and fluid – not set in stone,” writes author Larry Alton.

And patients respond well to nurses who are caring and good at their job, regardless of gender.

“Encouraging diversity of all kinds can have benefits in patient care across the health care field,” reports Illinois’s Bradley University.

“While gender does not inherently make a person a better health care provider, some patients may feel that they can relate more easily to nurses of the same gender.”

In the UK, the head of a private boys’ school says educators should be encouraging more boys into female-dominated professions like nursing.

Philip Britton, principal at Bolton School in Greater Manchester, says girls had successfully penetrated male-dominated fields like science and engineering, but schools in the UK had less success with helping boys to a career in nursing, social care and primary school teaching.

“There are far fewer male nurses than there are female doctors proportionally, and I think there is a far greater job of work to be done in showing young men that they have a place in the caring professions of that sort. A lot of work has been done in addressing stereotypical character traits where we’ve been concerned about girls’ engagement,” Mr Britton said.

“Those are being correctly addressed; an engineer is not a burly bloke, it could be a girl. Relatively less has been done in schools in showing that a nurse can be male.”

Britton’s long-term view is that male employment will suffer overall, if they do not consider careers that rely more on creativity and caring.

“I think we’ll find over the next decade that caring professions probably will be valued more highly.”

A recent study published at Science Direct, confirms that “since the 1970s, many jobs and sectors traditionally dominated by men have contracted or disappeared, whereas the demand for jobs traditionally held by women has increased significantly, with these patterns expected to continue in the future.”

However, the majority of boys interviewed in a 2018 OECD study still aspired to typically male-professions. 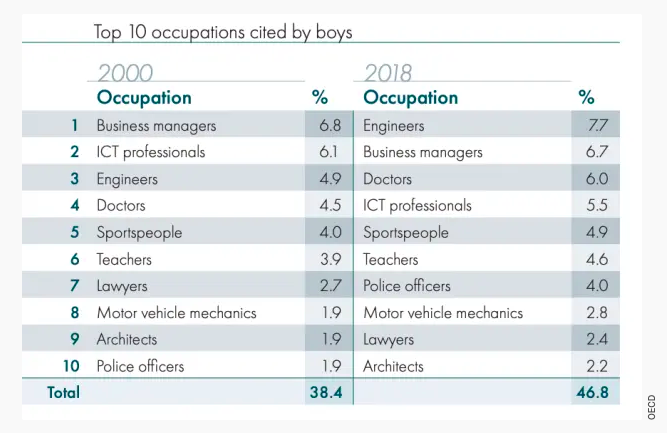 “The future that students see for themselves does not square with the future of work,” said Andreas Schliecher, head of the education directorate at the OECD.

The study found that parents were the biggest influence on young people’s aspirations.

The study used data from PISA, a test administered to 15-year-olds in 79 countries and territories every three years, as well as survey responses, and was released on 22 Jan on the second day of the World Economic Forum summit in Davos, Switzerland. 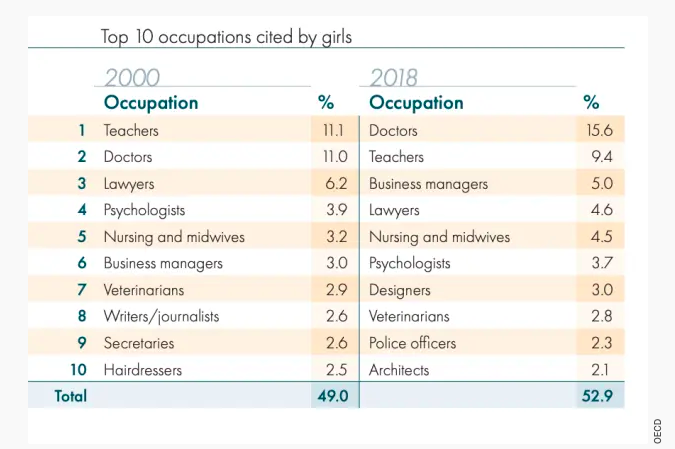 Read: A look at the growing trend of men becoming nurses

The world of work is changing, but the career aspirations of teenagers are not