Ten to Men report on the mental health of Australian males

Only a quarter of men said they would be likely or very likely to seek help from a mental health professional if they experienced an emotional or personal problem, report the authors of a longitudinal study into the mental health of Australian males.

And of those who had experienced depression, anxiety or and/or suicidality, only 40% had seen a mental health professional.

The findings have been released in the first chapter of Ten to Men, a major national research project funded by the Department of Health in response to the National Male Health Policy, “with the aim of increasing understanding of male health and factors associated with poor health outcomes among males”.

The first chapter of the Insights Report draws on data from the two waves of Ten to Men between 2013-2014 and 2015-2016, focusing on the mental health of men of different ages. It includes a focus on depression, suicidality and loneliness.

Poor mental health, conclude the authors (Sonia Terhaag, Brenda Quinn, Neha Swami and Galina Daraganova) remains a significant public health concern among males, with up to a quarter of males experiencing diagnosable poor mental health in their lifetime, the most common of which is depression, 20% of adult men.

“Over one-third of those adult males who experienced severe depression in 2013/14 were still experiencing this in 2015/16,” say the authors, reporting that some men with severe depression are either not engaging with health care or mental health services, the treatment they are receiving is not adequate, or they have had a relapse in that time.

Ten To Men respondents were asked about their lifetime experience of suicidality between 2013/14 and 2015/16.

The study researchers said it was important to understand suicidal thoughts, plans and attempts, in the priorities for suicide prevention and research, and to identify men who may be at increased risk.

“Based on the findings of this chapter, suicide interventions are particularly needed for men living in disadvantaged areas, those who are experiencing a relationship breakup and separation (not divorce), and those displaying any degree of depressive symptoms.”

Loneliness among men was identified as something that needed to be de-stigmatised through public health campaigns, with four per cent reporting not having a single, close friend. 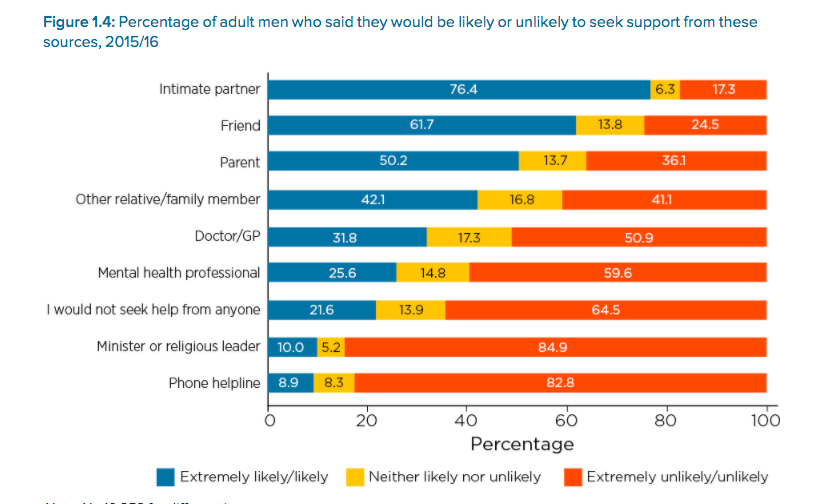 Finally, the authors highlight the “the extent of unmet needs and lack of engagement with the mental health care system among males,” with a significant proportion of men with mental health issues not seeming to access professional support.

However, the fact that the majority of those with mental health problems did report seeing a GP was an opportunity to identify, treat and/or refer these men on to dedicated health care services and resources.

“In addition to this initiative, public health campaigns that de-stigmatise mental health disorders, improve understanding of mental ill-health, and raise awareness about mental health care services and resources may encourage men to actively seek professional help sooner rather than later.” 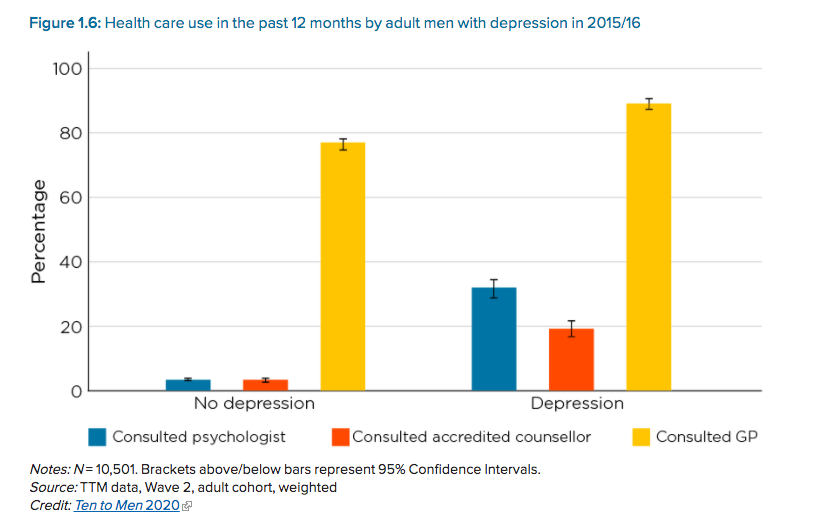 The Ten to Men study team will release the remaining three chapters of their Insights Report over the next few months.

These chapters will focus on: