Dads in Distress (DIDs) had been providing life-changing support for dads dealing with the trauma of family separation since launching its first group in Coffs Harbour, NSW on Father's Day 1999.

DIDs was founded by a separated dad, Tony Miller (OAM), who had contemplated suicide but decided to form a group with other ‘Dads in Distress’, which met on his verandah to talk over their problems and look out for each other.

The DIDs service is now run by a national charity, Parents Beyond Breakup, which provides support for separating dads who are doing it tough at 25 locations and runs a national helpline.

However, the basic principles of the first group that met on a verandah 20 years ago remain the same, DIDs is all about providing a friendly space where dads get together, share their stories and look out for blokes who are doing it tough.

Pete Nicholls, CEO of Parents Beyond Breakup said: “Father's Day can be a tough time of year for dads who are separated from their kids and one of the busiest days for our helpline staff and volunteers. So as well as looking out for those dads who need our support, we’ll also be marking our 20-year anniversary this Sunday with the launch of the DadsAlive! campaign. 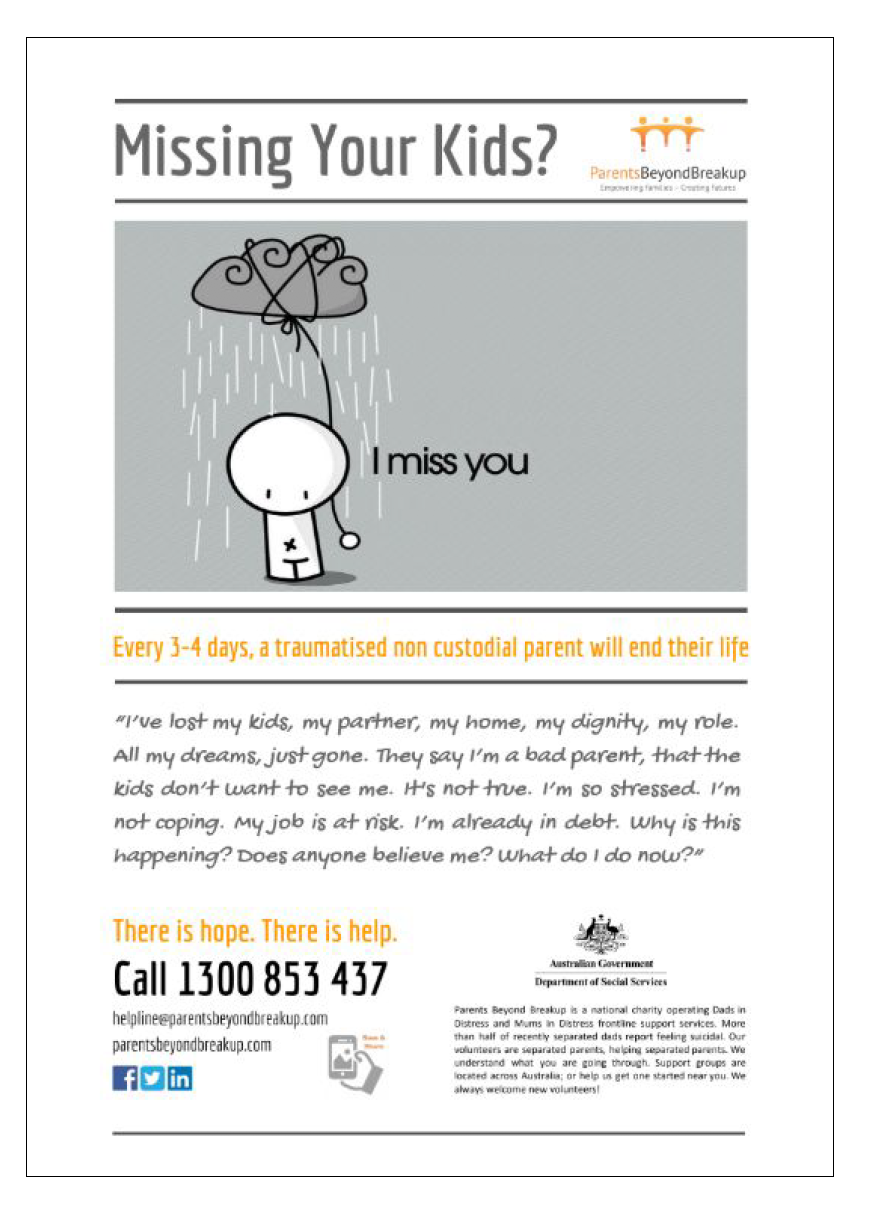 “The DadsAlive! campaign will raise awareness of our vital work with separated dads, extend our support network to reach more ‘dads in distress’ and undertake research to make the case to Government policymakers to put more resources into supporting separated dads.”

“Our ultimate goal is to reduce sucide among separated men and giving their kids the best start in life by keeping their dads alive and in their lives.”

At the heart of the DadsAlive campaign is a series of events across the year beginning with Federal MP Julian Leeser and CEO of Suicide Prevention Australia, Neeves Murray, attending a special 20th anniversary support group in Sydney.

Later this year, the charity will launch a year-long research project into the plight of separated fathers in Australia. This will include an examination of key challenges faced by separated fathers and their children, and will outline facts, insights and case studies.

DIDs will prepare a ‘2020 Vision Report’ and publish the findings to mark the end of the 20th Year celebrations on Father’s Day in 2020. The research project will be called ‘Lend us your Voice’ and interested dads can register at www.dadsalive.org.