A new University of Queensland study into early learning shows that less than three per cent of all educators in the sector are male.

The report – ‘State of Early Learning in Australia 2019’ - was developed as part of the national Early Learning: Everyone Benefits campaign.

It says the number of children using early learning services (aged up to 5 years) was nearly 45% in 2018, although Aboriginal and Torres Strait Islander children and those who live in economically disadvantaged areas were under-represented at pre-school.

Of the estimated 195,000 staff employed in childcare services in Australia, the majority are aged between 25-44 years old and 97% of the workforce is female.

“When all forms of service are included, this figure is 91 per cent, as relatively more males work in OSHC (Out of School Hours) and occasional care,” the report states.

Associate professor Dr Michael Nagel, regarded as one of Australia’s leading experts in child development, said having a male role model in early education was important for the development of boys, especially those growing up without a strong male figure in their lives.

“Those boys who grow up in absence of fathers or strong male role models suffer from far more problems than those who do, they are more likely to experience abuse, social disadvantage, mental health issues, and exhibit behavioural problems,” he told the Courier Mail.

“This is not to say that mums don't do a good job, but boys need male role models, in school in particular, it’s very sad – I’ve been in schools where there are no male staff bar the groundsmen.”

Professor Nagel said there was a stigma around men developing a career at the coal face of early childhood learning, “unless they get involved in administration.”

The Queensland University study says the benefits of early learning have been well established through research in Australia and internationally. These include:

“More immediately, young children benefit from early learning by developing the cognitive, social and emotional skills to help them thrive every day,” the report says.

“However, too many children experiencing vulnerable or disadvantaged circumstances are missing out on sufficient hours of early learning.” The cost of early learning remains a barrier for some families, either keeping them away from early education services entirely or limiting them to fewer hours than they would like.

“It’s been shown that the first 5 years of a child’s life are the most critical, so I daresay that early childhood educators actually have the most important job in our society and that needs to be reflected in culture and public perception,” said Australian Childcare Alliance board member Jae Fraser.

“After 18 years’ experience in early learning, I know that having gender balance in the educator force is so beneficial for shaping a well-rounded future generation,” he said. 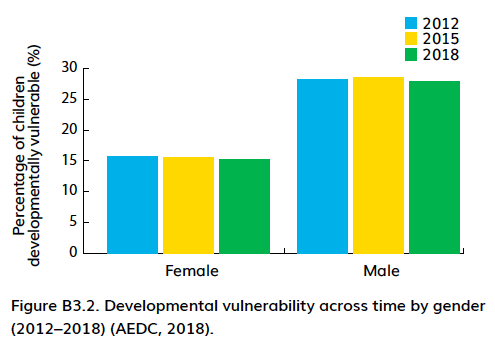 The report states that in their first year of school nearly 30% of males were more likely to be developmentally vulnerable compared to females (15%).

In 2018, twice as many Indigenous children were developmentally vulnerable (41.3%) as their non-Indigenous counterparts (20.4%).

Download the report: State of Early Learning in Australia 2019 (PDF)