It’s International Men’s Day (IMD) on Saturday 19 November 2022 and our theme in Australia is “Celebrating Mateship”. Our aim is to inspire more men to #MakeTime4Mates.

IMD is a great opportunity to take part in a global conversation about manhood, masculinity and men’s issues by:

You can run an event that promotes our "Celebrating Mateship" theme for 2022 or focus on one or more of the six objectives of IMD instead:

Pick a theme or topic that inspires and then decide which one of our 15 ways of celebrating International Men’s Day you’re going to run with. And remember, while lots of people host an event on the actual day, many people also schedule activities in the run up to the day or even in the week afterwards.

There are thousands of men’s groups in Australia that meet weekly or monthly, from Men’s Sheds to Men’s Walk and Talk groups. A common feature of these groups is that they create opportunities for men to build social connections in line with our #MakeTime4Mates theme.

Some of the groups supporting IMD this year are inviting men to join one of their regular sessions include Men’s Wellbeing Inc, Dads in Distress, Tough Guy Book Club, Good Blokes Co and Complete Men.

It’s well-known in the men’s health sector that action-orientated events built around “male-friendly” activities can be highly effective when engaging men. In recent years, there has been an explosion of activity-based men’s groups, like The Man Walk and Mongrels Men.

Many men’s mental health projects like Grab Life By The Balls, Mr Perfect, Average Joes and The Men’s Table, bring men together around food and drink, whether that’s manning a BBQ, chatting with mates over coffee or building lifelong friendships through a monthly men’s night in around the kitchen table.

A popular way to mark IMD is to host a one-off breakfast, lunch or BBQ. Men’s Resources Tasmania has been hosting an annual IMD Breakfast since 2018 and this year Grab Life By The Balls is running a series of Coffee and Chin Wag events in Queensland.

Some International Men’s Day events go to another level to lay on the entertainment and give men a great experience. Last year, Ipswich Local News in Queensland, took over the showgrounds to create the “For the Boys Fest” featuring music, a car show, a market, food trucks and Tug of War.

This year, another Queensland event, Cardi Gras, is also offering cars, music and a market.

Some IMD events make raising money for men’s health one of their key goals. The Lions Club in Penguin, Tasmania, hosts an IMD breakfast with guest speakers. In 2020, all the proceeds went to Prostate Cancer Tasmania.

This year, one of the fundraising events that’s already lined up is an IMD charity trivia night being run by the Master Plumbers’ Association of Queensland, for MATES In Construction.

One of the aims of IMD is to celebrate male roles models, so how about holding a “Man of the Year” Award in your local area?

Sheds Happens in Mackay, Queensland will be holding their 3rd annual awards event for IMD in 2022. Last year, after a celebratory breakfast, the organisers headed to the Vinnies Men’s Shelter, to donate $3,000 raised at their event. Continuing the theme, the shelter manager gave out awards to some of the shelter residents.

Meanwhile, Mt Isa is hosting its second annual awards with nominees competing in three categories – Man of Achievement, Local Hero and Youth Leader. The Awards are presented at a celebratory dinner, complete with a host of entertainment including a hypnotist, a demolition derby and lawn mower races.

One way to attract a crowd to an IMD event is by hosting a talk that will be of interest to your target audience. The Australian Men’s Health Forum provides a range of easy to use Know Your Man Facts toolkits, that include talks on topics like Men’s Mental Health and Men’s Heart Health.

This year, in the spirt of our #MakeTime4Mates theme, we’re launching a new Know Your Man Facts talk on the important role that mateship plays in keeping men healthy.

Make sure you subscribe to the Know Your Man Facts newsletter for updates on International Men's Day Resources and contact [email protected] for specific presentation material. 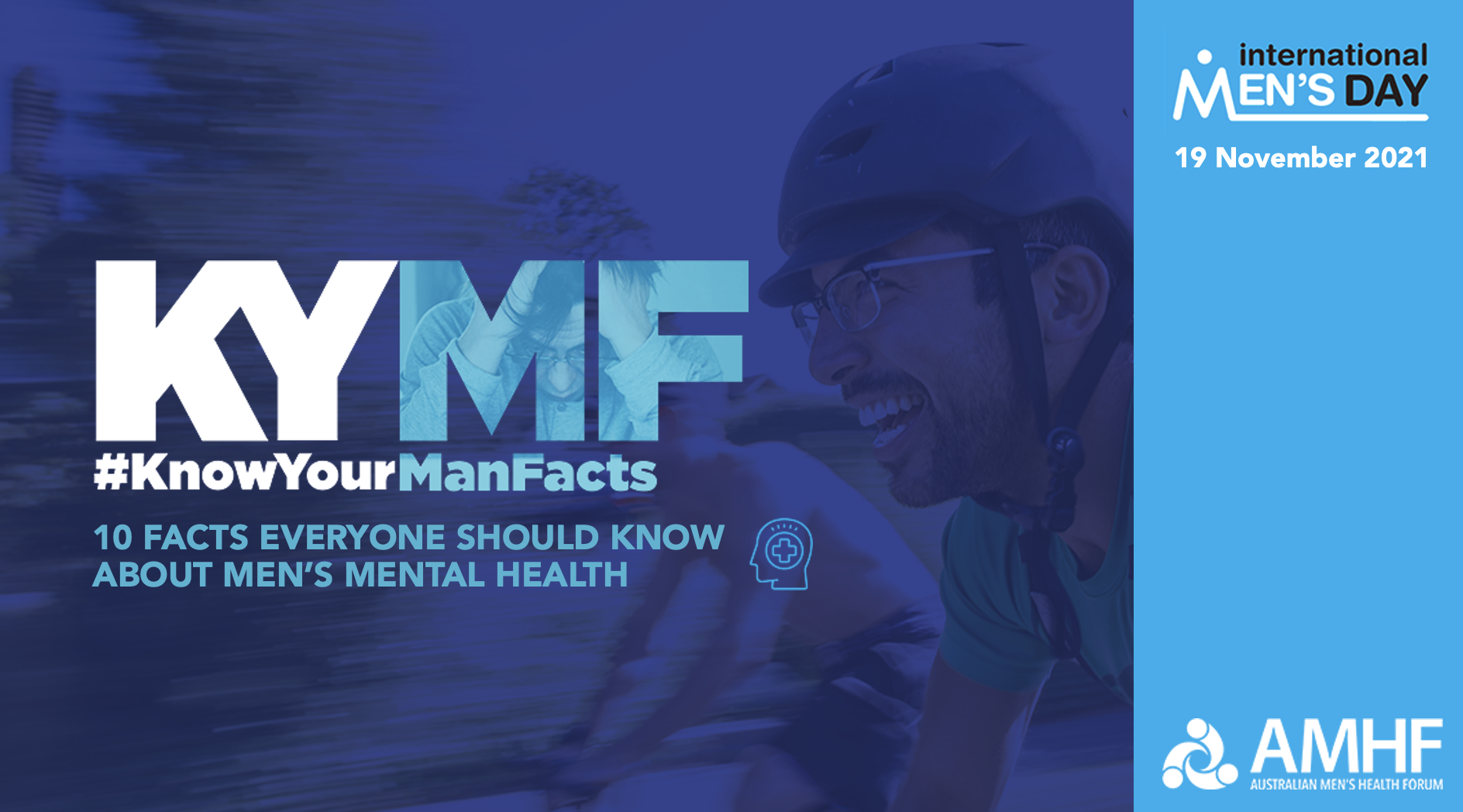 IMD is a great day to host a men’s health forum. In 2018, Men’s Health and Wellbeing WA ran a sector forum for men’s health organisations across the state. In 2019, the Royal Newcastle Hospital played host to a Male Health and Wellbeing Forum for health professionals.  In 2020, the specialist pharmacist, Men’s Health Down Under, hosted one of its patient forums on IMD.

This year, Darwin will play host to an International Men’s Day Forum for the third year running, following on from the events in 2020 and 2021.

Online events really took off during the height of the COVID-19 pandemic and while it’s great to get back to meeting face-to-face, online events can still be a good way to mark International Men’s Day. Brighton North Rotary in Victoria, for example, took their “Happy as Larry” lunch online in 2021.

In the past two years the Top Blokes Foundation have hosted webinars on Young Men’s Health and The Realities of Pornography. Other organisations that have marked the day online in recent years include FBAA; Men’s Health Down Under; Australian College of Nursing; The Fathering Project and NECA Victoria.

Every year, schools around Australia mark International Men’s Day in a variety of ways. Some examples include activities focused on student wellbeing; fundraising for men's health charities;  special breakfasts and afternoon teas for boys and inviting community members to come in and talk to students about manhood, masculinity and men's mental health.

In Tasmania, Dominic College holds an annual International Men's Day breakfast for Year 5 to 10 boys, their fathers, grandfathers and carers; staff members, the community and old scholars. All funds raised go to scholarships for boys at their sister school in Samoa.

A growing number of business groups are getting involved in IMD. In 2020, the Kyogle Chamber of Commerce hosted a barefoot bowls event and in 2021, the Central Coast Chamber of Commerce in Tasmania, held an International Men’s Day breakfast with a guest speaker.

This year the Gawler Business Development Group in South Australia is planning to embrace the "Celebrating Mateship" theme by hosting a Business Men's Networking Evening, featuring comedy and networking. GBDG has embraced the #MakeTime4Mates theme with an evening of laughter featuring The Beautiful Bogan, comedian Marc Ryan. 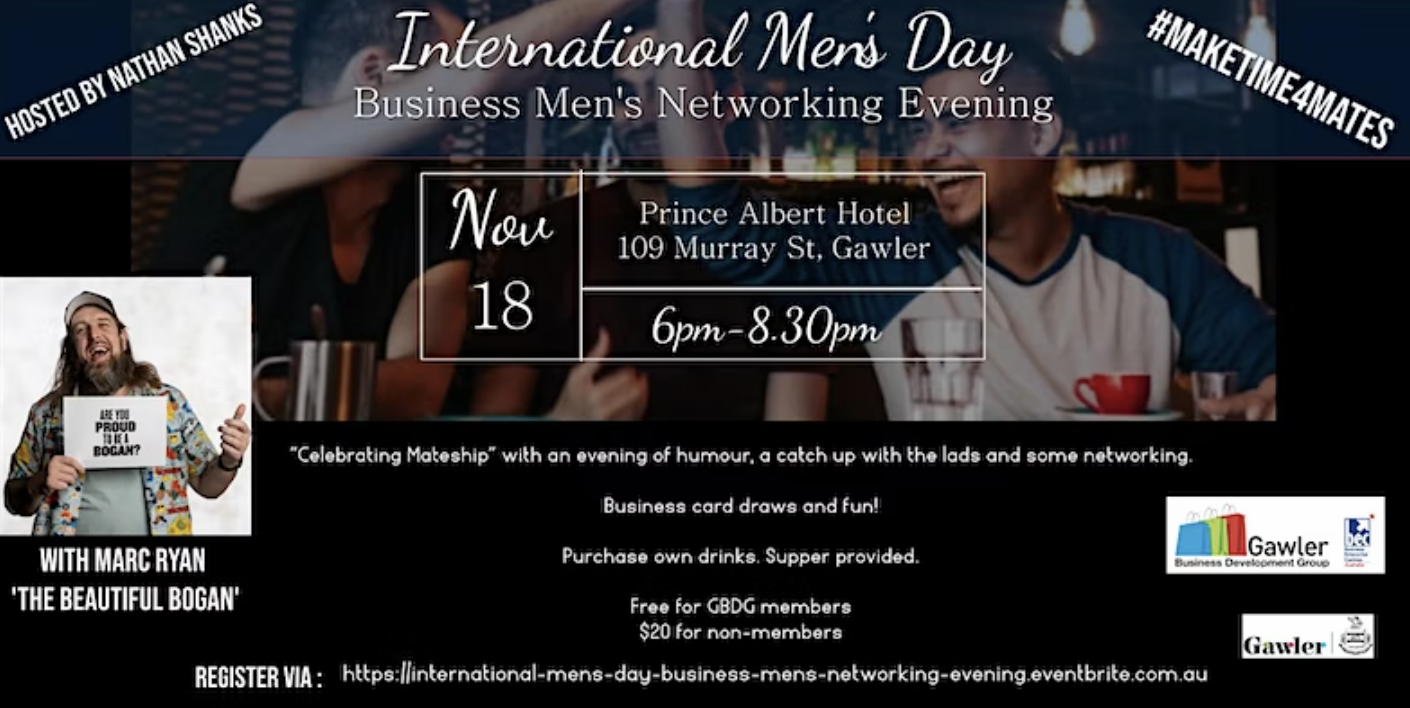 In terms of mainstream culture, 2020 saw the popular soap Neighbours create a special “all-male” edition and last year, the ABC got involved by curating a special International Men’s Day collection of past programs. The series features content celebrating “the great role models that exist for boys and young men” as well as focusing on “men's mental health, struggles and stories”.

Getting in early this year, the team behind International Men’s Day celebrations in MacKay in Queensland, have already held an IMD-themed photographic competition and exhibition celebrating male role models.

Well known guest speakers can be a big drawcard when running an International Men’s Day event. Some of the names that have taken part in IMD in the past include:

There’s also been a host of past and present AFL stars involved in International Men’s Day:

International Men's Day is big news on social media with #InternationalMensDay regularly trending at number one on and around the 19th of November every year.

Even a simple, positive post can generate excellent engagement, such as this post from ABC Brisbane that hand 2,000+ interactions. Last year, the Australian College of Nursing created some great, new content to give its existing Men In Nursing campaign another push on social media.

Many organisations use IMD to provide information to men - like the Business Victoria Hub and Abergeldie Complex Infrastructure - with men's mental health always a popular topic. Others engage male staff and services users in creating content for International Men's Day, such as the homelessness charity, Wintrringham and RSM Global. While some use the day to acknowledge male staff and volunteers like Hornsby SES and Keller Australia.

Finally, you don’t have to limit yourself to engaging with the men in your community, as these examples of original content from the ACN and IT Wire demonstrate.