The Alcohol and Drug Foundation are calling for a national strategy to reduce the harm caused by alcohol after a new study ranked it as Australia's most harmful drug. The health risks of alcohol are particularly relevant to men's health as men are three times more likely than women to be risky drinkers and experience over 70% of alcohol-related disease.

The study was led by the Department of Addiction Medicine at St Vincent’s Hospital Melbourne and published in the Journal of Psychopharmacology.

The authors of the study argue that if alcohol and drug policies are to be efficient and limit the burden of the increasing prevalence of drug use, they must focus on the drugs causing the greatest harm in the community. They fall short, however, of recommending that policies should place greater focus and resources on the populations most at risk, such as men.

The study used a panel of experts to rank the harm that different drugs do to both individuals and to others. In terms of individual harm, alcohol was ranked fourth with a score of 35 out of 50, behind fentanyls (50), heroin (45) and crystal meth/ice (42). 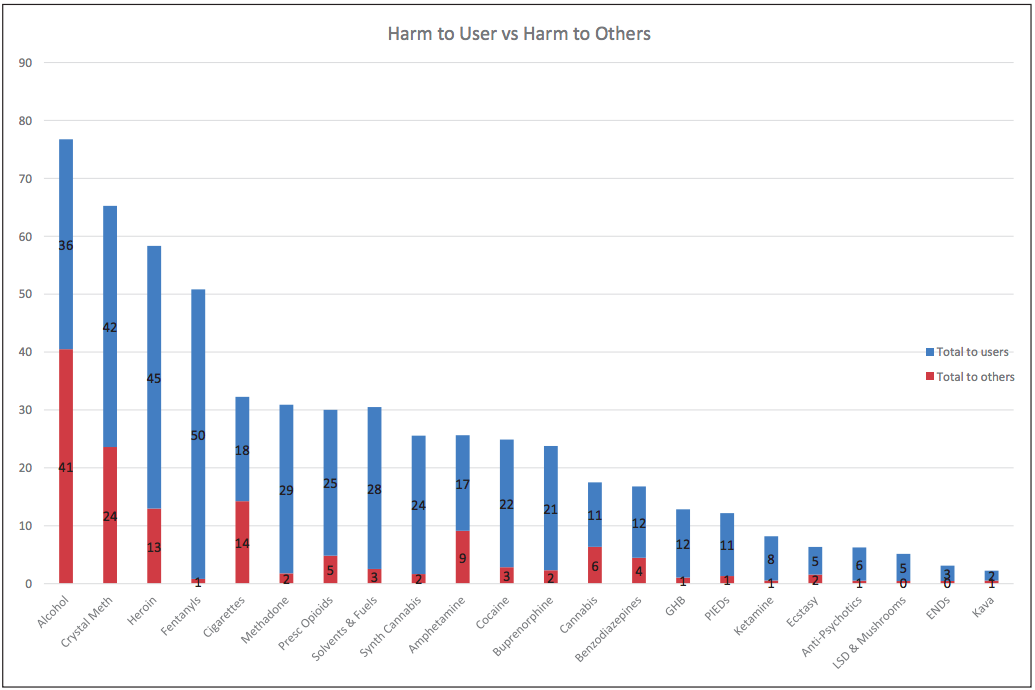 Alcohol was ranked first overall as it recorded by far the highest score on harm to others (a score of 41 compared with the next highest score of 24 for crystal methamphetamine). The widespread negative impacts of alcohol included economic costs, family adversity, injury and alcohol-related death and disease.

The authors acknowledge that the harm that alcohol causes others is less easy to measure while noting that their study found that over 50% of alcohol’s total harm score was contributed by harm to others. Previous Australian studies found that 73% of respondents had been negatively impacted by someone else’s drinking in the previous 12 months.

In terms of gender differences, women were more likely to be impacted by family members or intimate partners, while men were more affected by strangers, friends and co-workers. The greatest risk was to young adults who were the most negatively affected across a wide range of harms.

In 2010, the cost of the harms caused by the drinking of others was estimated to be approximately AUD $6.8 billion a year. The authors argue that any effective alcohol policies are needed not only for the sake of the drinker but also the community. This aligns with WHO's 2015 recommendation that the effects of alcohol on others should be quantified in similar fashion to the effects of passive smoking.

Federal Health Minister Greg Hunt has committed to releasing a national plan to reduce the harm caused alcohol by the end of 2019 (following on from a public consultation that took place between December 2017 and February 2018).

At State level, VicHealth has launched a "men's risky drinking" program that aims to create more options for men to connect with their mates without drinking.