A walking group for men, founded by a physiotherapist in Kiama 12 months ago, looks set to expand thanks to the power of social media. The Man Walk is much more than an exercise group, it is providing social connection and informal support for blokes doing it tough and it's been inundated with requests to start new groups after a Facebook post went viral.

Kiama physiotherapist Mark Burns launched The Man Walk after his regular morning stroll around Kiama Harbour expanded to include friends and strangers.  Mark's friend, school teacher Dave Hoole, decided to try out The Man Walk concept in Wollongong and then took the idea to another level after a post about the group was shared 7000 times and liked by 12,000 people. 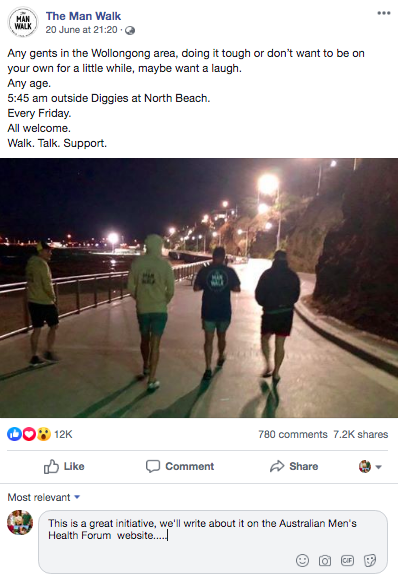 "We've helped groups set up in other areas - there's now groups in Newcastle, Canberra and Queensland, and more starting. It's always been about providing a safe place for blokes to get together and support each other, there's nothing too formal about it.

"There's blokes of all different ages and walks of life, some come on their own, others with friends, there's fathers and sons. Some have been touched by suicide, some have family issues - we all have troubles of our own. But for many men it can be daunting to get professional help, they just want a support crew."

"We're not psychologists, we're not there to give advice. We're there to listen and share stories. And it's obviously filling a gap for men who want a bit of activity, a bit of communication - to talk about what's making them happy, or sad.

"However because there's been such interest, we are trying to create links with organisations and local professionals so if men are seeking something more professional, we can guide them in the right direction.

"I'm passionate about community mentoring. It's about having good men in local communities who can come and have a conversation and let people know they have someone on their side."