Men’s Health Down Under has been named winner of the ACT Men’s Health Awards in Canberra today.

Yesterday in Brisbane, TradeMutt took out the Brisbane ‘trophy’.

One of the key things identified as driving the success of the Men's Health Downunder program by Brad Butt, founder, is that "men can access a pharmacist, with or without their partners, on an ad hoc basis with the initial consultation being upwards of an hour long.

"This ensures men have time to get all their questions answered ensuring that they leave with a good understanding and hopefully outcome - no question is too difficult nor is it unlikely it hasn’t been asked before."

Other benefits identified include the ability of their specialised pharmacists to give greater counselling on the medications prescribed, particularly when they are more specialised or have had issues previously, offer holistic care - that being assistance with smoking cessation, weight loss, healthy eating, alcohol intake and physical activity as these areas can affect outcomes.

Men's Health Downunder, which is based at Cooleman Court Pharmacy in Weston ACT, also delivers services beyond the state boundary into regional NSW (Forbes, Orange and Wagga) but also works with Urologists, GPs, Nurses, Physiotherapists, Sexologists and counsellors remotely in an effort to bridge the gap that exists for many men between them and their doctor/allied health care practitioner.

Their clinic like service is something that Brad and the team are moving towards delivering into other towns in the next 18 months to greater service the population. With 1 in 7 Aussie men being diagnosed with prostate cancer by age 85, just over 18000 new cases of prostate cancer diagnosed in Australia in 2014 and noting estimates put the prevalence of erectile dysfunction at over 1 million men across the country, there is a huge need for not only more of these clinics but greater knowledge, education and accessibility.

FIND OUT MORE ABOUT MEN'S HEALTH DOWN UNDER. 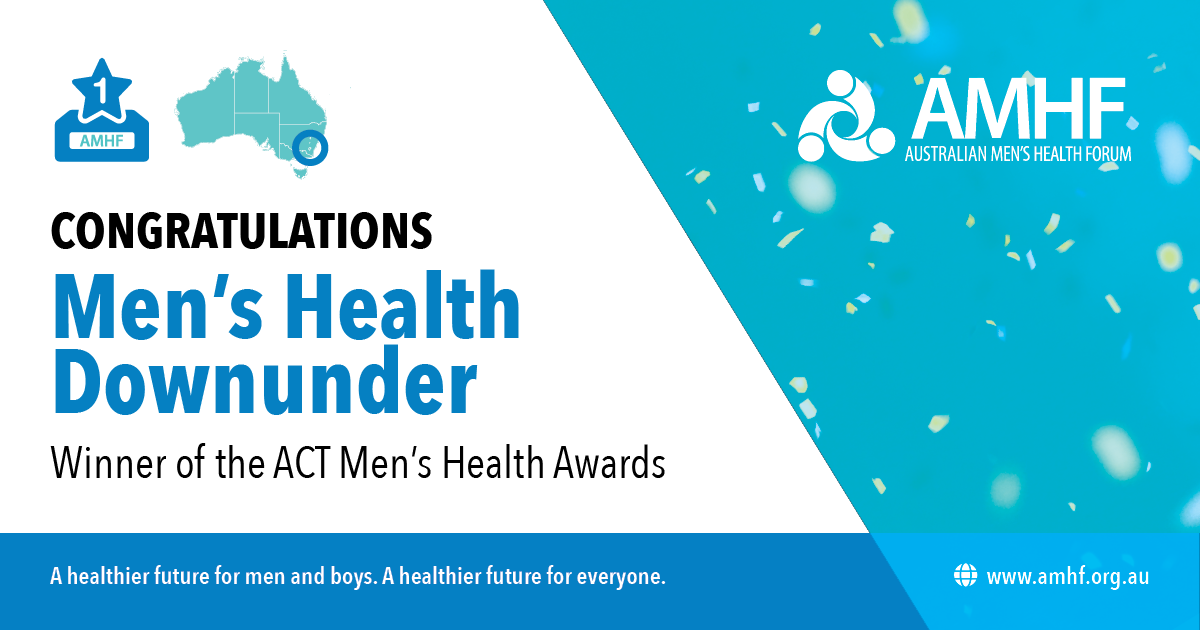 In Canberra the following were also shortlisted:

The Mengineering Program, who work with fathers and sons living within the Canberra region.

Menslink (education programs) are delivered by men to  male-only groups, which they find creates a better environment for young men to open up than co-ed settings.

The Healthy Tradie Project takes a different approach to health and wellbeing in the construction industry, focusing on physical, mental and emotional health through movement, mindfulness and nutrition.

OzHelp Foundation has a 16-year track record of delivering mental health and wellbeing programs to ‘hard to reach’ men with a heightened risk of suicide.

Working With The Man is a program delivered by EveryMan Australia that aims to support men to deal with their use of violence.