Men’s Health: What Can We Learn From Gillette’s Masculinity Ad?

Gillette, the razor company, has sparked global controversy, with a new advertising campaign in the US that places a focus on negative aspects of masculinity as part of its drive to become a brand that “encourages men to be their best”.

The two minute advert adopts a “toxic masculinity” narrative citing male-to-male violence; the #MeToo movement against sexual harassment and sexual assault of women by men as evidence of a “problem we can’t hide from”.

As is often the case with gender issues, the advert has been deeply divided opinion along binary gender political lines, with one side labelling the adverts “toxic feminism” and the other side claiming that the backlash is proof that the advert is needed.

So far, so predictable, but what does this have to do with men’s health?

Australia’s new National Men’s Health Strategy calls for the health system and all levels of Government to work to “significantly improve men’s health” by providing “services that are male-centred” [and focus] “on the unique needs of men and boys”.

Yet we live in a world where popular gender stereotypes about men, masculinity and men’s health tell us there is something seriously wrong with Aussie blokes. Therefore, it must be men, not the system, that needs to change.

As the launch of the National Men’s Health Strategy moves closer, is it possible for those working to improve men’s health to communicate with men about their wellbeing without “doing a Gillette” and dividing opinion?

To help you navigate the minefield of talking about gender issues with men, here are four important questions to consider before launching any awareness campaign around men and boys’ health.

1. WHAT PROBLEM ARE YOU’RE TRYING TO SOLVE?

When working to address the social issues that men and boys face, it is vital that we are clear and transparent about the problem we are seeking to solve.

As a business, the primary problem Gillette is trying to solve is how to sell more products. In order to do this, Gillette has chosen to tie its brand to some of the social issues that are linked to gender.

When people think about men and gender issues, they tend to do so in one of two ways:

The message this approach sends to some men is that we’re not interested in the problems you face personally as a man, but we do expect you to take personal responsibility for the problems other men cause.

For other men, the message that there is something you personally can do to help solve the problems other men cause, will be welcomed. The result, for Gillette, is that it has pleased some of its target audience but alienated others (and generated vast quantities of free publicity in the process). Whether this helps or hinders its quest to sell more razors remains to be seen.

The lesson here, for those wanting to reach out to men, is that it’s important to frame the gender issues you are seeking to resolve, in ways that are relevant to and resonate with the men you want to reach.

There are more than 10 million men and boys in Australia (and close to 4 billion worldwide). Each one of us is a unique individual and so any attempt to communicate with all men and boys as a group, will inevitably fall short.

Yet mass communication is an essential part of health promotion. So how do can we draw on masculine archetypes to help us reach the majority of men, without resorting to lazy gender stereotypes or attempting to include everyone (and ending up pleasing no-one)?

Gillette has clearly attempted to move away from the classic, hero archetype that male grooming brands have been promoting since the 1990s: muscular, metrosexual, perfectly groomed and attractive to women.

Instead, it presents us with the classic 21st Century trio of progressive masculine archetypes: the Bad Bro; the Good Bro and the Bystander Bro.

The Good Bro is the progressive male hero, no longer defined by his looks. What defines the Good Bro, is not cultivating the right body or perfect looks, but adopting the correct political attitudes and behaviours. As Gillette’s new advert states, good men are those who “say the right thing” and “act the right way”.

In contrast, the Bad Bro is a stereotypical representation of masculinity at its worse: sexist, racist, homophobic and violent.  Some commentators have claimed that Gillette is presenting the majority of men as evil, while others have countered that it presents men in a positive light, but the reality is more nuanced. 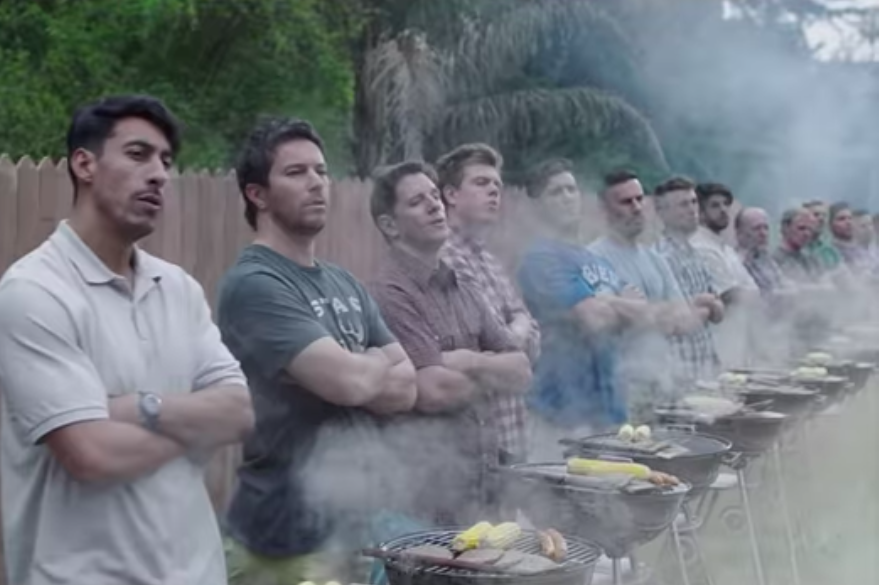 Gillette presents the archetypical bloke as a row of brainwashed bystanders, lined up behind BBQs with their arms folded. These everyday blokes are neither Good Bros nor Bad Bros, they are complicit Bystander Bros, unconsciously repeating the mantra, “boys will be boys”.

Gillette is unequivocal here, the majority of men are not Good Bros – “some already are in ways big and small, but some is not enough”. When you study the ad closely, the message to men is clear and deliberate, some men are Good Bros, but most men are not, so men need to change.

In any communication campaign targeting men, it will always be impossible to create messages that are relevant to all men. There will also be times when it is necessary to narrow your campaign to try and connect more effectively with specific communities of men (younger men, older, gay men, Indigenous men and so on).

But for people who are trying to reach most men, it is vital to carefully consider what message you are sending out to (and about) the majority of men. If you want to build trust and an ongoing relationship with most men, then it probably doesn’t work to start that process by effectively saying that most men are a problem.

3. WHAT SOLUTIONS ARE YOU OFFERING?

If you want to engage with men more effectively then it’s important to think carefully about the solution (or solutions) you are proposing to the problems you want to address.

Having chosen to highlight “the social problems men cause”, as part of its drive to sell more products, Gillette proposes that the solution to these problems is simple: “men need to hold other men to account”.

The idea that complex social issues such as the sexual assault of women and male-to-male violence can be resolved by telling people what to do, is optimistic at best.

If this was the case, we could also resolve many of the key health issues we face by simply telling people to stop smoking, drink less alcohol, eat better, exercise more and see your GP regularly.

According to Fernando Desouches, former Global Marketing Director for Axe/Lynx, Gillette has fallen into a “progressive man” trap.

“Recently, many brands have sought to counter traditional ways of being a man by presenting men in a more progressive – but equally stereotypical and unrealistic – way,” he says.

“Telling men that all they need is to be vulnerable and emotional is simply trying to force one trait on to them to replace another. And in the Gillette ad, this message is clumsy and patronising. At issue is Gillette’s focus on telling men how they need to behave and its failure to help them feel comfortable being who they really are.”

Most complex social issues have multiple solutions. Working with men and men’s groups to find solutions to the problems that are important to them, is more effective than dictating a single solution and telling men that your way is the right way.

The lesson here is to be careful of offering just one solution to the issues you want to address and be sure to allow space for a range of different approaches that empower men of all backgrounds to find their own solutions.

4. ARE YOU TALKING WITH MEN OR AT MEN?

The cultural conversation around men and gender issues is often dominated by two contradictory messages that both attempt to break through the gender stereotype that men need to “man up”.

The first message is that men don’t talk enough, so when it comes to gender issues like men’s mental health, they need to “open up” and as Desouches says “be vulnerable and emotional”.

The second message is that men talk too much (they “mansplain”), so when it comes to talking about gender issues men’s job is to “shut up” and listen.

What arises from these contradictory messages to men to both “open up” and “shut up” is that the majority of Australian men now feel that they cannot speak openly about gender issues.

Telling men what to do is easy, but rarely effective, particularly when men feel unable to talk through issues and arrive at their own conclusions.

Taking time to build trusting relationships with men of all backgrounds and perspectives, to discover what they think, feel and want, requires an ongoing commitment to working with men and boys.

The Government’s National Men’s Health Strategy calls on the health sector to develop a “best practice consumer engagement” plan that is inclusive of men of all backgrounds. In principle, this is a positive step forward.

The strategy runs for ten years from 2020 to 2030. It is an opportunity to commit to a decade-long process of learning from men’s lived experiences of “being a man” and developing a deeper understanding of how to improve the lives and health of men and boys.

If we resort to positioning men and masculinity as the problem we are trying to solve and decide that telling men how to behave is the best solution, then we are destined to fail. However, if we rise to this challenge in collaboration with men, we can help build a health sector in Australia that is - as Gillette used to say – the best a man can get.