The event marked the launch of AMHF’s new Charter for Men’s Mental Health, developed in response to May’s Federal Budget, which overlooked men’s health in general and male suicide in particular.

At an online gathering of more than 100 men’s health sector representatives, the Assistant Minister to the Prime Minster for Mental Health and Suicide Prevention responded to concerns that none of the $298m allocated to suicide prevention in the budget was targeted at male suicide.

“We've got the $61 million Suicide Prevention Grants Program, which we announced in the budget, a significant focus of that will be men.

“Three quarters of suicides are men so it's only logical that a suicide prevention grants program should have a significant focus on men.

It doesn't have to be clinical support, there's quite a range of things that we fund and support today, right across the mental health and suicide prevention system that aren't clinical in nature.

“Guidelines will be published later this calendar year and there will be an opportunity for people to apply. As with every government grants program, there'll be criteria and people can assess those criteria and see how they fit in.”

“Our research has consistently found that while 3 in 4 suicides are men, up to 4 in 5 clients of taxpayer-funded suicide prevention services are women.

“Suicide is a clearly a gendered problem, we cannot simply fund gender-blind solutions and hope they will be equally effective for men and women.

“We welcome the Minister’s commitment to allocate a significant chunk of the $61.6m National Suicide Prevention Leadership and Support Program to gender-inclusive initiatives that specifically target men.

“We will also be asking the Minister to audit the $298.2m of Government spending on suicide prevention to review how effective it has been at reaching men, in line with the recommendations of the PM’s National Suicide Prevention Adviser.”

Minister Coleman highlighted the national Distress Intervention project, which he said is “particularly important for men and will be something that is used by men quite often”.

“What this is about is identifying earlier, when people are in distress, and acting earlier to help them before a situation escalates. So, an example might be through Commonwealth bodies like Centrelink or the ATO, where we identify that someone may be in distress and may be at risk and then, with their consent, get them the support they need.”

“I think it's a really important body of work and it's something that the government and the new National Suicide Prevention Office, soon to be established, will be looking at very closely.

“We know that men account for three quarters of suicide and we know that more needs to be done to, to work together to reduce the incidence of suicide amongst men, and the Charter is a very useful document and we'll be reviewing it very carefully.” 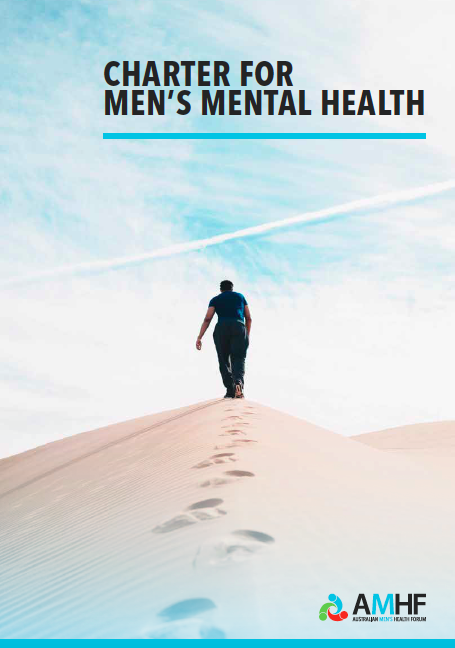