Suicidal behaviour among men could be up to three times higher than some estimates, according to research on the work of Australia's ambulance services.

The three-year research program found that every day, ambulances around the country made on average 82 attendances to men who had either tried to take their lives or were having serious thoughts about doing so.

The research found there were 30,197 ambulance attendances for men who had thoughts of suicide or had attempted suicide between July 2015 and June 2016.

Yet existing data, based on presentations to hospital emergency departments, identify around 10,000 male cases annually.

This is because hospital emergency department data is typically only able to record one reason for presentation, which may not be related to mental health. For example, physical injury following a suicide attempt may only be captured in the data as a physical injury.

The research was backed by $3.1 million in funding over the past three years from the Movember Foundation. Movember's new Global Director of Mental Health, Suicide Prevention Brendan Maher, said:

“On average, we lose six men to suicide in Australia every single day – a figure that is both devastating and unacceptable. For the first time, ground-breaking research projects like Beyond the Emergency help to paint a picture of the full extent of the men’s mental health crisis, which will prove invaluable to the sector as we continue to identify service gaps and fight for better treatments that will ultimately save the lives of Aussie men,” he said.

The Beyond The Emergency research program has been led by Beyond Blue, whose Chair, Julia Gillard said;

"This research tells us that suicide-related presentations to our health services by men triple when measured by ambulance data rather than hospital data alone. It tells us that what we know about male suicide is just the tip of the iceberg".

"We need better options for men who are in suicidal crisis," Prof Lubman said. "If they don’t have life-threatening injuries, they shouldn’t be at emergency departments yet paramedics feel they have too few alternatives. Our paramedics need more support and people with acute mental health issues or who feel suicidal need better models of care." 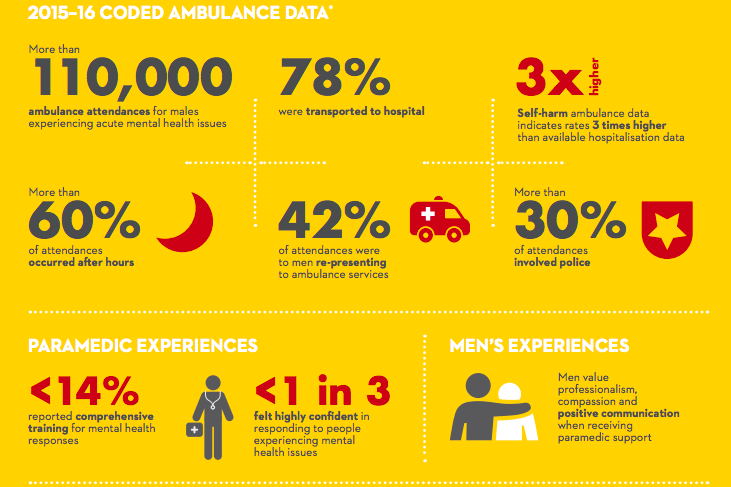 Beyond the Emergency, is described as a world-first study by Turning Point and Monash University in partnership with ambulance services, investigated the scale and nature of ambulance call outs to men presenting with acute mental health issues, self-harm or suicidal behaviour.

They also conducted an online survey of 1,230 paramedics, in-depth interviews with 73 paramedics from city and country areas, and interviewed 30 men who had used ambulance services for mental health and suicide-related issues.

Researchers discovered that between July 2015 and June 2016, there were 112,637 ambulance attendances for men experiencing acute mental health issues. Of those:

According to the research, only 14 percent of paramedics reported comprehensive training for mental health presentations and two out of three paramedics felt under-prepared to talk to patients about their needs.