Putting dads in the picture for Father’s Day 2021

A growing body of qualitative research and practice is shining a light on how to better support dads through parenthood.

This Father’s Day, September 5, many of those driving cultural change and developing programs that better engage fathers will take to the streets with their infants and toddlers as part of the national dads movement, Man With A Pram (MWAP).

MWAP is a community activation, and one that pushes a positive image of involved fathers across social media platforms. Men pushing prams. Dads in full focus. Happy young fathers empowered in their parenting journey.

While retailers and mainstream media make cute suggestions about how to spoil dads on Father’s Day with big breakfasts and ideas for budget gifts, the organisers behind MWAP and other initiatives are celebrating the steady recognition that small changes supporting dads go a long way.

Speaking at the Men’s Health Connected online gathering last May 26 this year, the founder of MWAP, Digital Dads and Dads Group – Tom Docking – said connecting with new fathers was a complex science.

“It’s not easy, and has often been put in the too-hard basket,” Tom said.  “It’s actually about doing the small, simple, effective, meaningful things and working out how to wrap them into a program.”

Those simple things start with a hospital program that includes ante-natal education co-facilitated with dads who have been through the early stages of becoming a father.

Helen Funk, a midwife working in Red Cliff and Metro North in Queensland, said recent surveys of dads highlighted their appreciation that someone was asking for their opinion.

“Maternity services unintentionally exclude dads, and in so doing, they reduce support for mums,” stated Helen. “We make sure our presentations are very father-inclusive in their images.”

Those simple things include using more photographs of dads in family flyers, changing font colours, including dad-specific information and using the word ‘dad’ or ‘father’ in parenting classes.  Representatives from Dads Group chat for 15 minutes, check in with the dads about how they are feeling and what supports are available, such as SMS4Dads, which sends affirming text messages to new fathers and catches those who are spiralling downwards.

“Some dads have said, ‘we feel so empowered after these classes.’ Some dads said they didn’t realise how important they were,” reported Helen.

A hospital program, a digital program and a community program,  was an acknowledgement of the father’s journey and addressed transitions from those three key areas, “in a way that no health service currently acknowledges,” said Tom Docking.

Digital Dads uses Facebook groups to give men a space to share parenting experiences, where COVID-19 has limited face-to-face meet-ups. “One dad said this program saved his life,” said Tom, who is working with the University of Sunshine Coast to build systems and programs that meaningfully engage fathers.

“We’re now we’re in a space where we’re scaling those initiatives. This requires collaboration with other health services, and finding people who are passionate.”

Man With A Pram has a growing list of partners committed to raising awareness about perinatal mental health (including the Australian Men’s Health Forum). The MWAP website guides dads to different events and encourages them to celebrate fatherhood in public spaces by sharing photos of dads and their babies.

“We are particularly good at hiding the challenges we have as fathers,” says Tom. “Social relationships drop completely off the radar for 3-5 years.”

Also at the Men’s Health Connected online gathering, Dr Chris May from the Family Action Centre at the University of Newcastle, said 98% of dads will attend antenatal sessions – one of the few times dads have an interaction with a family health service.

“Things are changing in families, but services are slower to change,” he said, adding that services will soon be out of sync with what was happening in homes. 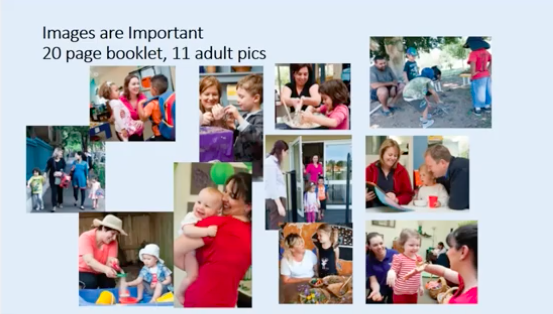 He also challenged selection of photos in family literature and marketing materials, presenting a 20-page booklet for families that was heavily weighted to women.

“Images are important … if we consider that dads have a poor relationship with services and we want to make a change, one step is to look at the marketing material.”

SMS4Dads developed by Associate Professor Richard Fletcher at the University of Newcastle, connected directly with new fathers using simple technology, “just like a mate tapping you on the shoulder”.