According to Parents at Work CEO Emma Walsh, there is a “a myriad of parental leave policy out their concocted by employers.” So it’s not surprising many men in Australia don’t use it.

While in some countries there has been huge progress in making parental leave fairer for men and women, Australia could do a lot better for new dads, she told the Symposium.

Walsh, who has been advocating for improved awareness and policy around parental leave for the past 13 years, says Australia has lagged.

“Australia will not close the gender inequality gap if we don’t advance parental leave equality."

So what’s holding men back? Watson highlighted a number of factors including:

A radical change in men sharing parental leave would allow men to bond with their children, as well as creating more equal division of work at home, improved work-life balance and more productivity and engagement at work.

There would also be more opportunities for women to advance their career potential, reduce the pay gap and increase women-in -leadership positions. 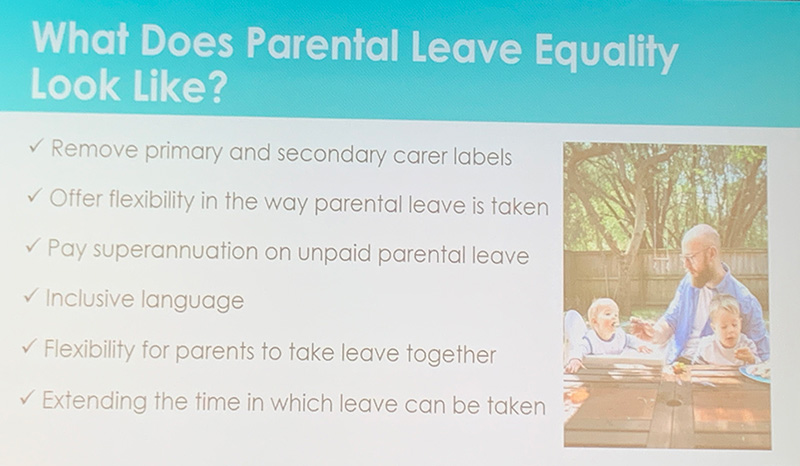 A slide on parental leave equality from Emma Walsh's presentation to the Australian Fatherhood Research Symposium on May 2, 2019.

Walsh highlighted governments and companies who were taking a more equitable approach to parental entitlements such as in Sweden, where parents are entitled to 480 days (to share) of paid parental leave at 80% of their total salary. This can be taken up until their child turns eight. The result? 88% of Swedish dads access some part of parental leave.

A shared parental leave scheme was introduced in the UK in 2015, allowing parents to share up to 50 weeks of leave, 37 of which are paid (view Share the Joy). However, campaigners have criticised the UK scheme as it fails to give new dads the same rights to parental leave as mums.

“You cannot take parental leave at the same time in Australia unless you have an employer on a paid parental leave scheme,” said Walsh. “Let’s change that.” 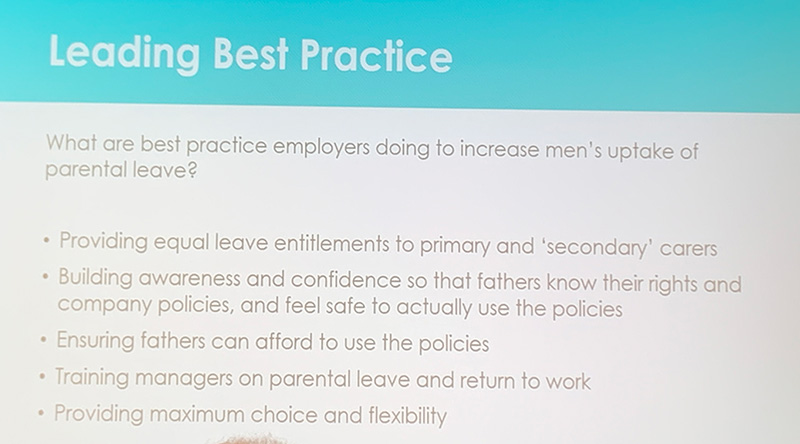 A slide on best parental leave practice from Emma Walsh's presentation to the Australian Fatherhood Research Symposium on May 2, 2019.

Companies leading the way included Deloitte, Medibank and Spotify, who offers six months paid parental leave at full pay which can be taken until the child is three years old. 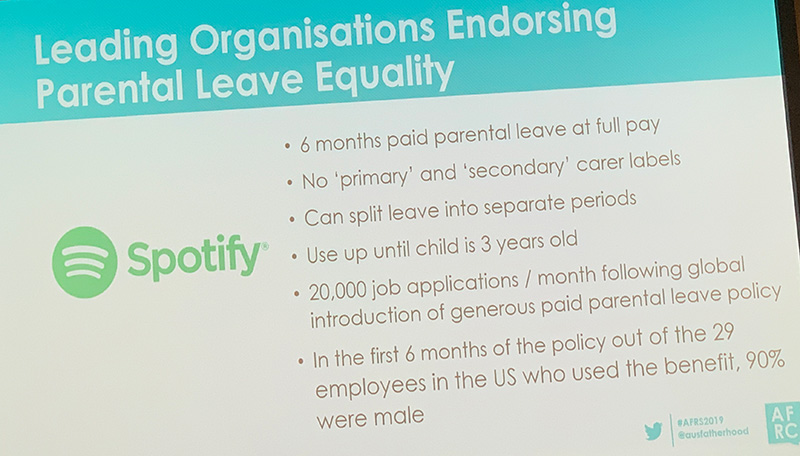 Support involved fatherhood: get involved with the #BETTER4MEN campaign (AMHF)

Read: Want men to share parental leave? Just give them equality (The Guardian)