The second instalment of the 10 to Men longitudinal research project reports that one third of Aussie males drink at moderate-to-high risk levels.

Risk levels are typically higher in younger adult males and those who do engage in moderate-to-high-risk alcohol consumption do not transition to low patterns over time.

It reports that one-fifth of Australian boys aged 10-14 years have consumed alcohol and those aged between 15-17 who tasted alcohol underage are more likely to engage in frequent and riskier alcohol consumption patterns from the age of 18.

“It is well-established that the use of alcohol is associated with copious personal and interpersonal harms, including a range of diverse health-related consequences,” say the authors.

These include various types of cancer, infertility, dementia, violence, damage to organs (brain and liver) and injuries as a result of intoxication.

Among those aged 25-44, alcohol use disorders are one of the top three leading causes of the total burden of disease (and fatal burden). The other two are suicide and self-inflicted injuries and back problems.

The chapter draws on data from Waves 1 and 2 of Ten to Men (TTM) to explore patterns of alcohol use in males aged 10 and over. Other findings include:

“Poorer mental health and overall wellbeing (as indicated by recent experience of depression and/or anxiety and a lower Personal Wellbeing Index score) were associated with increased odds of engaging in riskier alcohol use," says Chapter 2. 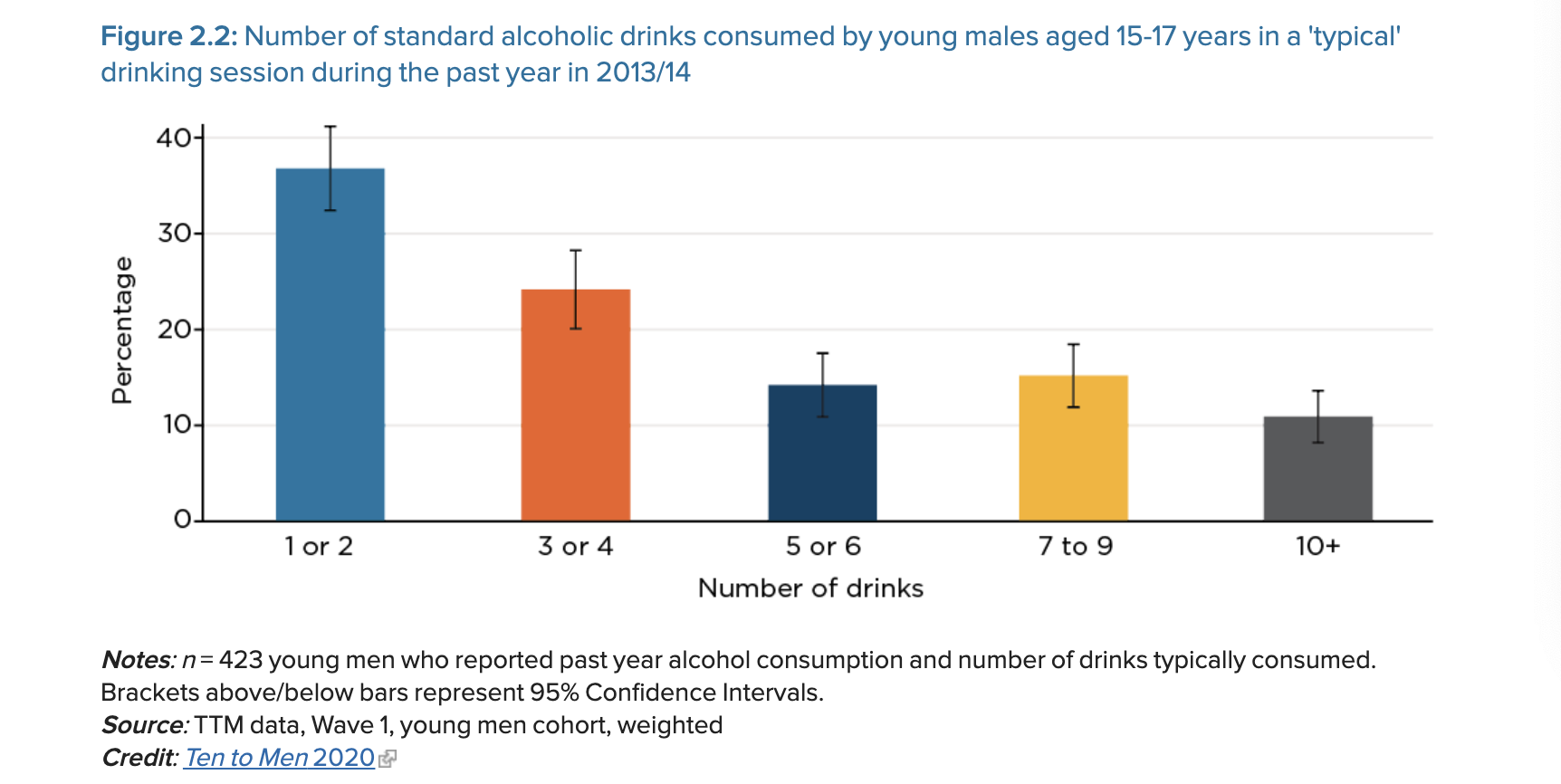 Ten to Men: The Australian Longitudinal Study On Male health is a major national research project whose findings will improve programs and policies for all Australian males, undertaken by the Australian Institute of Family Studies.

Anne Hollonds, Director of the Australian Institute of Family Studies, said that reducing the number of males starting to drink in adolescence was crucial to the long-term health of men.

“Our research shows that males who start drinking in adolescence are likely to carry high risk patterns of alcohol use into adulthood.

“It is important that parents and adolescents understand that avoiding alcohol until adulthood is best to prevent harmful habits forming early,” she said.

Of concern, most adult Australian males who were engaging in moderate-to-high risk alcohol use in 2013/14 were still doing so the following year. Only 26% of this group had changed their alcohol use to become low-risk drinkers between data collection waves, suggesting that once drinking habits are established, they tend to persist.

“These findings are consistent with others from the latest wave of Ten to Men research. They suggest many Australian males experiencing adverse health or engaging in certain risk behaviours can become stuck in an unhealthy cycle. And then they find it difficult to make changes to improve their health and lifestyles,” Hollonds said.

“We need to create a culture and initiatives that support Australian men to make changes to stop them drinking at high risk levels.”

DOWNLOAD THE FULL REPORT: ALCOHOL USE AMONG AUSTRALIAN MALES