Dialing up the social factors that lead to male suicide

The Australian Men’s Health Forum seeks to highlight the social factors that contribute to male suicide and suicide prevention and to support those organisations working to develop male-friendly services to improve health outcomes from men in Australia.

As we mark World Suicide Prevention Day 2019, research continues to show that the majority of male suicides are not primarily linked to a mental health diagnosis.

A recent study of male farmer suicide found that 78% of the suicides were predominantly associated with either relationship issues/family breakdown or work and financial issues.

And a new survey commissioned by Suicide Prevention Australia reveals that two in three regional Australians personally know someone who has completed suicide.

The survey showed that relationship breakdowns were the biggest risk for suicides with 92% of respondents naming this as the key factor, ahead of drugs and alcohol (67%), financial pressure (64%) and social isolation and loneliness (60%).

Having a mental health condition was not always a marker.

In Ballarat, in the central highlands of Victoria, suicide is 30% higher than the state average, with 60 male suicides recorded from 2013-17.

"For too long it's been a taboo subject, but we need to bring it out of in the open - out of the shadows," she told the Ballarat Courier.

"People complete suicide because they're in crisis," Ms MacGillivray said, "...These (risk concerns) are all very big factors. Just being aware of people who are struggling and what's going on in their life at this time is important."

The survey from CV-Library, the UK’s leading independent job board, interviewed 2000 UK workers.

“Statistics show that suicide is the most common cause of death amongst men aged 20-49 and something clearly needs to change in order to ensure men have the support they need. Our findings suggest it starts in the workplace, so employers have an important role to play here,” said Lee Biggins, founder and CEO of CV-Library.

Male respondents suggested that the following would make the working day less stressful:

One recent example of a male-friendly support initiative comes from Babana Aboriginal Men’s Group, who have launched ‘Dial a Brother’ to highlight suicide prevention in its communities.

Developed over the last six months, the group's message is simple - if you're feeling stressed dial a brother for a yarn. If you feel as though someone may be doing it tough dial a brother.

“A conversation at just the right time can make all the difference ... and it’s always a good time to have a yarn,” says Babana.

“Each of us can make a difference so make sure you SHARE the message and let’s all work hard for more of our people to live long and healthy lives.”

The theme for Babana’s annual Aboriginal suicide prevention awareness day on 13 September is, “action in communities.”

“Our belief is simple; empower a community to action and we will achieve impact,” says Babana. “But to do that you need to engage with the community, listen and understand what it is they want and develop services and responses to fit that need.

The Awareness activities will take place on Goat Island in the middle of Sydney Harbour on Friday 13 September.

Attendees will be transported aboard the Tribal Warrior Vessel the Mari Nawi for a day of culture and community, workshops and guest presenters. Workshops will once again take place around the island and focus on community-based need and how service providers can better engage with people and families on the ground. 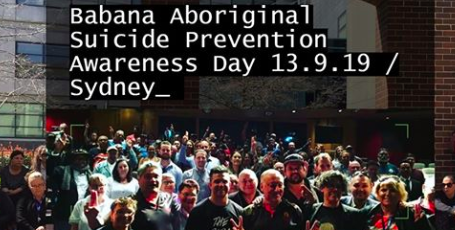