How to make friends and live more happily ever after

Billy Baker, a staff writer on the Boston Globe, was taken aback when his editor proposed that he write a story about, ‘how middle-aged men have no friends.’

Married with children and a sizable workload, it took Baker a quick stroll from the editor’s office to his desk, to realise that he had lost contact with a lot of his friends over the years, and knew about them only from the standpoint of status updates on social media.

Further research told him that, not only was it nice to have mates, but it could also have a huge impact on his health.

“Loneliness is an epidemic in America and it seems to be a problem elsewhere in the world,” he tells Hilary Harper on the ABC radio program, Life Matters.  “And it has these real dire consequences for, not just your mental health, but your physical health.

“If you want to live a long, happy, healthy life, friendship is one of the things that will get you there.

“If you don’t want to see your doctor, see your friends. The rewards are very real.”

The ABC interview invites suggestions from talkback listeners on how to make friends and prioritise social connection.

Rod speaks about the cycling group he belongs to in Tasmania, with 15-20 friends heading out several times a week.

Val recommends service clubs like Rotary, as a way to get involved with the community and develop valuable friendships. 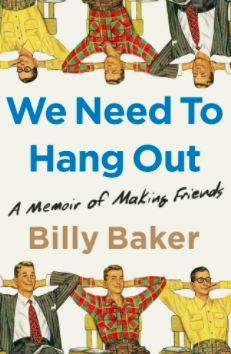 Billy Baker’s assignment became a book, ‘We Need To Hang Out’, which was published last month.

“Facebook was a false crutch,” he says. “I got rid of social media. It was transformative for me. I had to reach out to friends in real life. And when we got together, we were no longer robbed of the joys of catching up.”

Baker converted acquaintances into stronger friendships by putting himself out there and asking blokes if they would like to also hang out.

“One of the beautiful parts of being older, you can be more honest,” he says.  The more he reached out to people, the more it was reciprocated.

The Australian Men’s Health Forum is connected to many men’s groups who do just that; the growing men’s mental health grassroots movements has been strengthened by blokes turning up for each other in different settings from men’s tables, to walk-n-talk events, to dads groups, men’s sheds and building friendships through a shared passion or activity.

“If you don’t have active membership in a tribe, you have to find one,” says Baker. “I started a crew of guys who met up on a Wednesday night.

“It’s not about saying let’s get together and talk about our feelings.

“For men, the best thing to do is find an activity and then maybe the magic comes out, you get to those deeper moments.”

Read: Rapid growth for Dads I'd Like To Friend Clubs (AMHF)

Read: Serving up a table of volunteers (AMHF)