In NSW, the 2022 Men's Health Awards highlighted individuals and organisations who are committed to taking action in the men’s health sector.

“We were thrilled to see such a strong and widespread list of people nominated for the Awards this year, including many great projects in NSW,” said AMHF CEO Glen Poole.

NSW performed strongly across all categories in the 2022 Men’s Health Awards.

Brian Dowd is the brains behind the Walkabout Barber, a mobile barber and trauma support service that provides support to rural and remote communities. Brian is a suicide survivor who spent three years undergoing a range of rehabilitation programs and workshops after recovering from an attempt on his own life. He then trained in trauma counselling before setting up Walkabout Barber Enterprises in Warner’s Bay around four years ago. 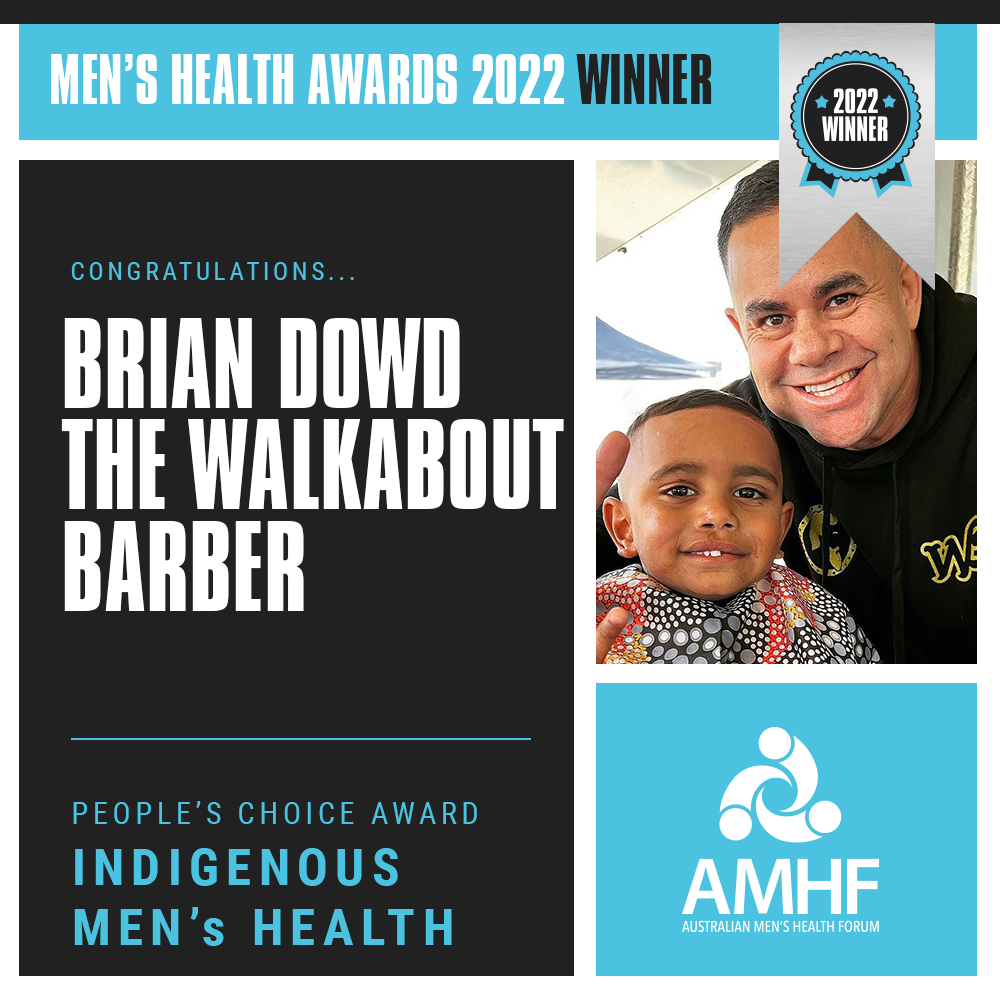 WNOW (When No One's Watching) is a men's mental health group in Sydney's eastern suburbs that gets together at 6am every Wednesday morning for a swim, workout, coffee and chat. They want to create a community where men are comfortable to take their ‘armour off’ and be their authentic selves, feeling supported and safe in a community of like-minded men. 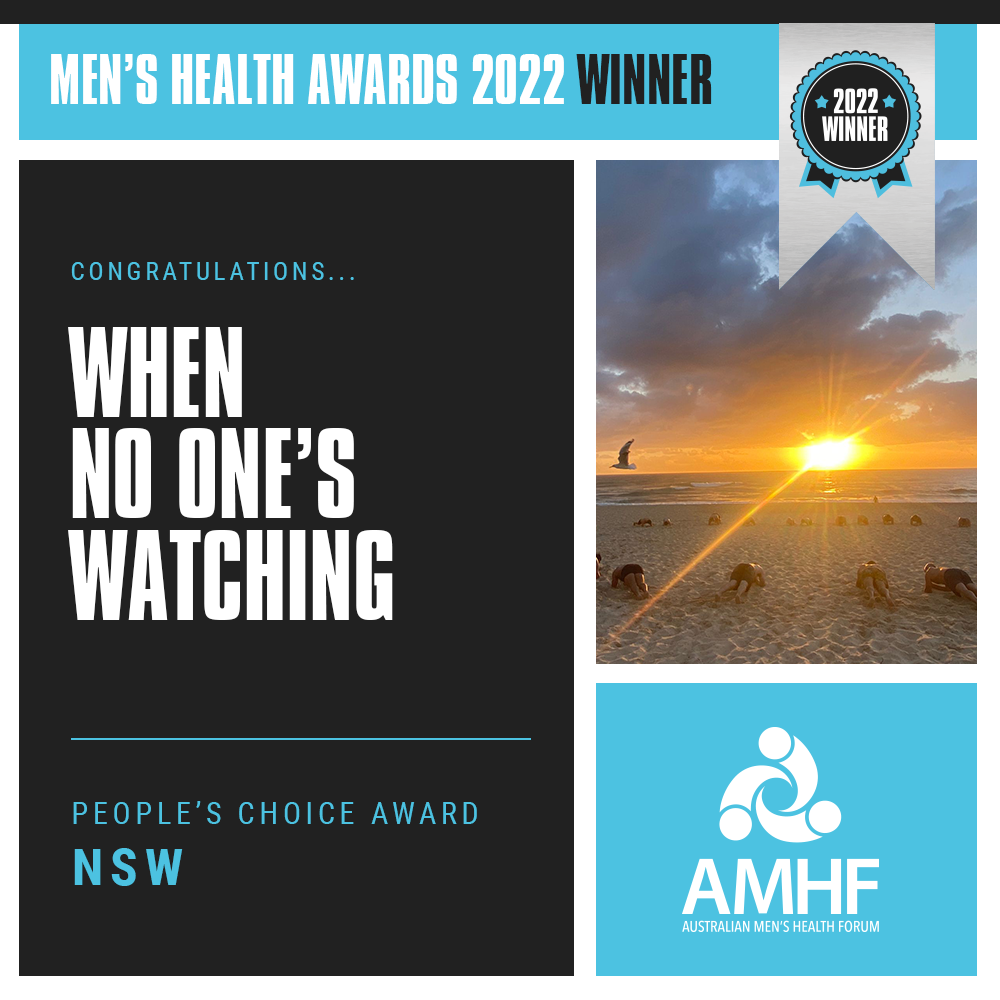 The following groups and individuals were shortlisted for a 2022 Men’s Health Award in one or more categories.

The Penrith Men's Walk and Talk [Getting Men Moving] is a free weekly event that attracts dozens (and sometimes hundreds) of men weekly. It begins and ends at the Nepean River Coffee Club and follows the bridge-to-bridge Great River Walk, which is about 6.4 km long and takes around an hour and 10 minutes to complete.

The Men's Table [Men’s Health Leaders] is picking up momentum around the country because it gets bloke's talking about things other than football and beer. Now at almost 50 tables, each table is a safe space to share and grow with other men who are going through similar stuff. The tables meet once a month over dinner (and maybe a beer) to support each other through life's ups and downs.

Asher Packman’s renamed The Fifth Direction [Contribution to Men’s Work] has taken hundreds of men through his flagship program, The Way, completed by 76 men. The Way Course reaches out to and inspires men, awakening their self-awareness and advancing positive masculinity.

The Pathways Foundation [Contribution to Men’s Work] is a contemporary, community-based Rite of Passage for boys into manhood, which takes the form of a five or six-day bush camp for boys aged 13 – 15 years with their father or a male mentor. This award-winning program has been running since 1995 and is an important entry point into men’s work. Participants get to see the father-son relationship blossom, and gain skills and insights into the making of men.

AMHF congratulates the great work being done by the following groups, projects and individuals from NSW nominated in the 2022 Men’s Health Awards.

SOLid is a peer-led boot camp, always outdoors and free for men to attend that is passionate about developing male community leaders, and focuses on Mindset, Exercise and Nutrition.

MoMENtum Australia is a global podcast that broadcasts discussions for men on 31 stations across Australia and also on Vision Radio. MoMENtum delves into sensitive topics such as dealing with pornography, addictions, depression, suicide, anxiety and personal relationships.

South Western Sydney Local health District has developed many projects that support men's health, the most recent being the Tackling the Challenge exhibition for Men's Health Week 2022, which tells stories of resilience and help-seeking strategies.

Mr Perfect was a 2019 NSW Men’s Health Award winner and continues to go from strength to strength, adapting to COVID-19 enforced lockdowns with regular online BBQ meet-ups. Founded by Terry Cornick, the BBQs foster community and connection across Australia.

Parents Beyond Breakup continues to win acclaim for its work to help separated fathers through its Dads in Distress Support services.  Dads In Distress won a Men’s Health Award in 2020 for its Virtual Verandah response to the COVID pandemic. This year, it was awarded Suicide Prevention Australia’s LiFE Award for Excellence in Suicide Prevention for Priority Populations, recognising the organisation’s leadership in saving more men from suicide. PBB offers a National Helpline, in-person and online peer support groups, reporting that 95% of people who call the Helpline experience a dramatic decrease in stress levels and a heightened sense of connection.

John Harper is a familiar voice in the men’s health movement, his Mate Helping Mate project has grown exponentially over the last 15 years and focuses on rural mental health. As one supporter stated: “It’s projects like these that tackle rural mental health in an open and judgment-free space, which garner a crucial sense of empathy and community among those that are not only physically isolated but often mentally, too.”

John Milham’s Northern Beaches Men has a membership of over 1000 active local blokes. Working from years of lived experience, John has become the guiding light for men who are struggling. He has initiated many grassroots programs.

Dr Arne Rubinstein and the team at the Rites of Passage Institute are working to build a better future for men and boys. In the past 30 years they have set up life-changing programs for men and boys around Australia and globally that have been attended by more 350,000 people. In recent years they have expanded into schools nationally and have implemented programs that now run annually for boys in some of the biggest and most influential schools in the country.

Two decades ago, NSW was one of the first jurisdictions in the world to take the lead in acknowledging the health needs of men, with the launch of the Moving Forward in Men’s Health policy.

There are many more organisations and individuals in NSW working to improve the lives of men and boys who have featured in previous Men's Health Awards including: Mentoring Men, The Banksia Project, The Center for Male Health (Western Sydney University), SMS for Dads, Professor Philip Morgan and the Healthy Dads, Healthy Kids program, Associate Professor Richard Fletcher, who leads the Fathers and Families Research Program at the University of Newcastle, Cristina Caperchione and the HAT TRICK program (Sydney University of Technology).