In the South Australia, the 2022 Men's Health Awards highlighted individuals and organisations who are committed to taking action in the men’s health sector.

“We were thrilled to see such a strong and widespread list of people nominated for the Awards this year, including many great projects in SA,” said AMHF CEO Glen Poole.

Goodwood Saints Football Club won the South Australia People’s Choice Award. Nominated in the Best Men’s Mental Project category, the Goodwood Saints Football Club runs a mental health program called the "Saints Healthy Minds". The project targets past and present players, coaches, and team managers to assist in identifying issues, helping young players to build their mental strength and empower them to speak out. In 2021 the club expanded the program, through a code-first Early Assistance Program (EAP) that links players with a Mind Care Coach. Players who need further assistance are referred to a psychologist or a GP who can arranged a mental health plan, with the club funding up to five sessions. 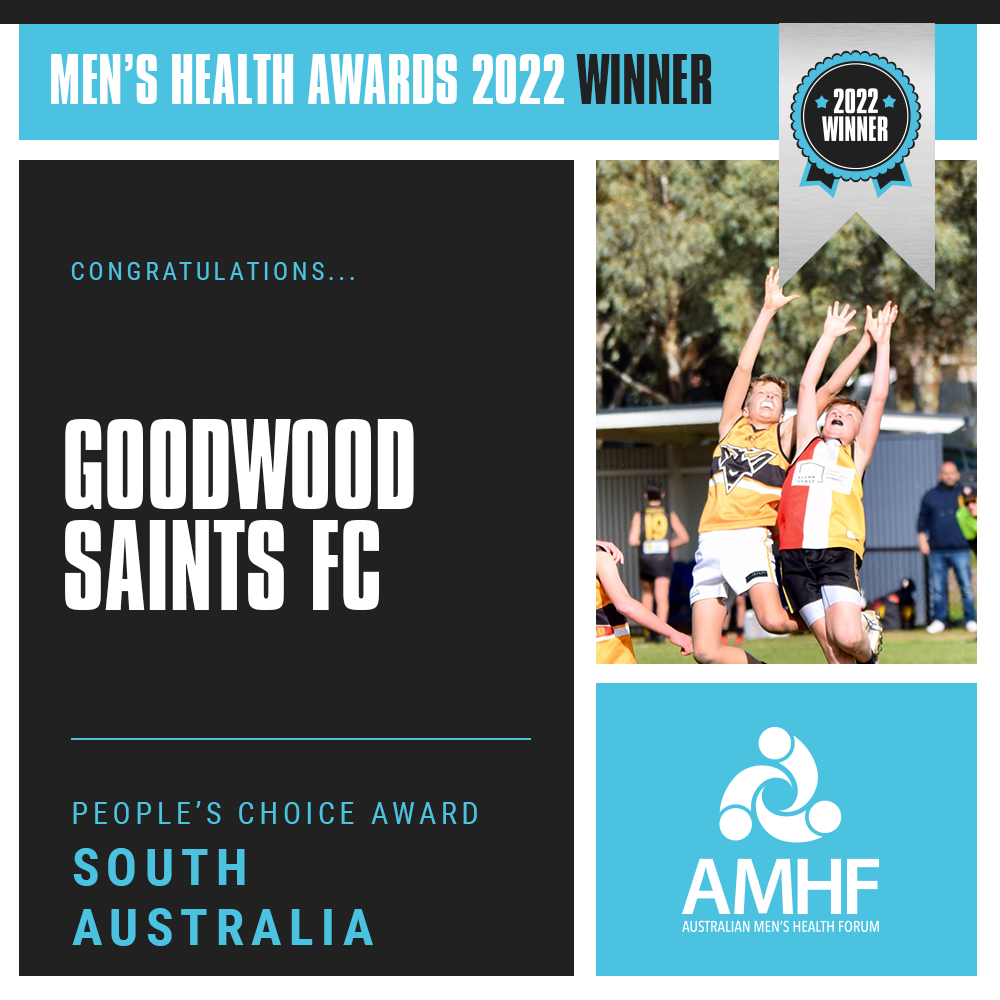 The following groups and individuals from South Australia were shortlisted for a 2022 Men’s Health Award.

Save Our Mates [Best Men’s Mental Health Project] is an ongoing series of men's nights first piloted in 2015. Developed by Gavin Schuster and Anthony Hart, the concept was born out of their shared desire to change the way rural and remote South Australian Men deal with "health issues of the mind".

Fat Farmers: Rural Health Initiative [Getting Men Moving] started in 2010, and since then has worked to encourage rural communities, and especially men, to be more active. Fat Farmers currently has 12 separate groups running across rural South Australia, which are all community-led and aim to make it easy for farmers to get some exercise while connecting with others and having a few laughs.

The Freemasons Centre for Male Health & Wellbeing (FCMHW) [Men’s Health Leaders] is an alliance of organisations that collaborate and jointly invest in multidisciplinary research and initiatives, the outcomes of which inform policy and practice to advance the health and wellbeing of males, and their families and communities. FCMHW brings together academics from the University of Adelaide, Flinders University and the South Australian Health and Medical Research Institute with the backing of the Freemasons of SA and the NT and the Flinders Foundation. It is the leading organisation keeping men's health on the agenda in South Australia.

Angela Sloan [Indigenous Men’s Health] is a Ngarrindjeri woman who works at Mount Gambier prison, where she supports the Indigenous prison community and their families. Angela has also worked with Pangula Mannamurna Inc (Aboriginal Community Controlled Health Organisation) in Mount Gambier, running Lateral Violence workshops for the community, and she served as a committee member on the “Treasuring Life, Aboriginal and Torres Strait Islander Suicide Prevention Action Plan.”

AMHF congratulates the great work being done by the following groups, projects and individuals from South Australia nominated in the 2022 Men’s Health Awards.

Young Blood Men’s Mental Health video podcast has for three years shared lived experience stories of young men. Creator and host Callum MacPherson was named 2022 South Australian Young Achiever of the Year for his efforts in running the project independently, having launched the podcast in September 2019 in response to losing a close friend to suicide. He was a Men’s Health Awards finalist in 2020 and 2021.

Wellteam is described as a life hacks portal developed by corporate executive Troy Flowers, who wanted to develop a wellbeing tool that’s within reach for most men. His database of hacks includes accessible exercises benefitting mind and body and helping men develop new habits.

There are a number of great men's health organisations based in South Australia that didn't feature in this year's awards including the Bolton Brothers, INATT, the Southern Men's Health Gathering and the Multicultural Men's Group of South Australia, which won the Men's Health Equity Award in 2021.