The health sector should acknowledge the needs of separated dads, writes CEO of Parents Beyond Breakup, Pete Nicholls.

Fatherhood is one of the key life experiences that shapes men’s health. In general, being a dad is good for our health, but being a “dad in distress” can put men’s health at risk. Knowing this, I was disappointed to learn that the new National Men’s Health Strategy places so little focus on the importance of fatherhood.

As CEO of Parents Beyond Breakup, I encounter the impact that relationship breakdown has on parents, families and children on a daily basis.

According the World Health Organisation, involved dads “live longer, have less physical and mental health problems, are less likely to consume alcohol and drugs, are more productive at work, have fewer accidents, are more likely to be satisfied with their lives and are more emotionally connected to their partners and children”.

As fatherhood promotes good health in men, the barriers to being a dad are also barriers to good health. One of the key barriers that prevents men from being involved fathers is family separation.

Suicide Is A Major Risk Factor

There are around one million children living in separated families in Australia. At least 80% of these children live mostly with their mums and 50% spend little or no time with their dads. We also know that half of separated dads experience thoughts of suicidality post separation and more than 10 male suicides a week are linked to relationship separation 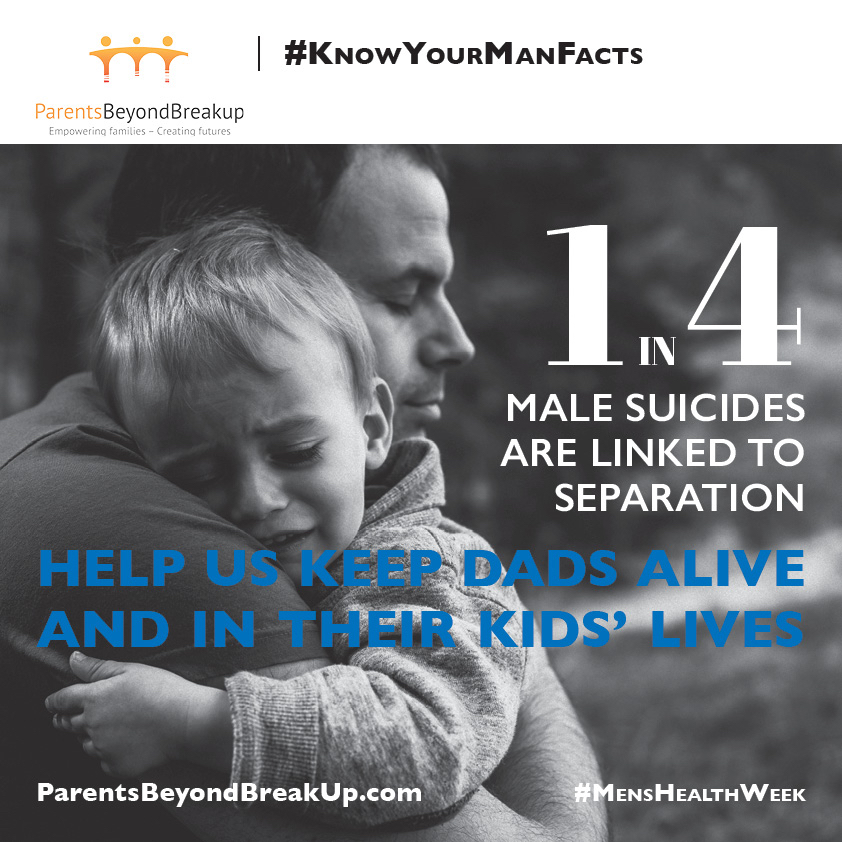 According to the Australian Institute of Family Studies, the four main barriers to separated fathers being more involved in their children’s lives are as follows:

The 2010 Male Health Policy recognized that relationship breakdown was a significant transition point in men’s lives and identified the need for various partners to take action to identify separated men (including separated dads) who were vulnerable to depression and risk behaviours such as excessive drinking, smoking, self-harm or poor self-care.

A History Of Inaction

On one level, nothing has really changed. It’s difficult to point to any specific actions that took place for separated dads as a result of the 2010 Male Health Policy. There was funding to promote the role of Aboriginal and Torres Strait Islander fathers in the first three years of the policy, but no sustained focus on fathers in general or separated dads in particular.

It could be argued that the Men’s Health Strategy is not the best place to address the issues that separated dads face. But the reality is, the Government hasn’t created any other strategy, policy or framework to support separated dads.

So even though we knew the relationships between men’s health and separated dads was on the rocks, opening up the new Men’s Health Strategy and realising separated dads had been kicked out, made me feel like a dad returning home from work to find his partner had changed the locks!

So is it really over? Should we start seeing other strategies or can we still save the relationship for the sake of the children?

I think we can and more importantly I think we should which is why I've outlined 5 ways the strategy could focus on separated dads here.