The team at the Regional Men’s Health Initiative have launched a new Working with Warriors podcast, addressing the key men’s health issues they promote in the physical world when driving around regional, rural and remote WA in a red (and white) Ford ute.

As with the motto emblazoned on the side of their utes, “before it gets too much, talk to a mate,” the podcast series is giving blokes permission to talk about a range of issues.

RMHI team members Owen Catto, Glen Duncan and Terry Melrose kicked off the podcast in June with a five-part series, ‘Talk to a Mate.’

“We need someone we can spill our guts to,” says Terry in RMHI’s down-to-earth vernacular. “The stuff that makes us tick, our pain, what is going on for us at a deeper level. People can hit the wall without having that mate.

“Could be a partner, someone we are in a relationship with, or a peer, someone we have grown up with, and a mentor, someone with lived experience who we look up to. We don’t always have all three and sometimes men don’t have any of those categories.”

Owen debunks commonly held beliefs that men don’t talk and that people need training to probe a mate who they feel is struggling.

“Our gut feel is really important,” he says. “100% a bloke just wants to be asked. Talk to a mate if you think your make is under the pump, ask him. You can do no wrong. We don’t need any training to talk to a mate. We can use our own language and ask when that gut feel is telling us to ask.”

The Regional Men’s Health Initiative has three key areas of focus. One is its warrior education sessions and the second, a fast track pit stop where they encourage men to treat their bodies as they would a prized tractor on their farm with regular check-ups.

The third is around advocacy and supporting positive change. In their upcoming September post on the RMHI website, the team discuss the subject of stoicism, and whether or not it should be regarded as a harmful trait when talking about male behaviour. 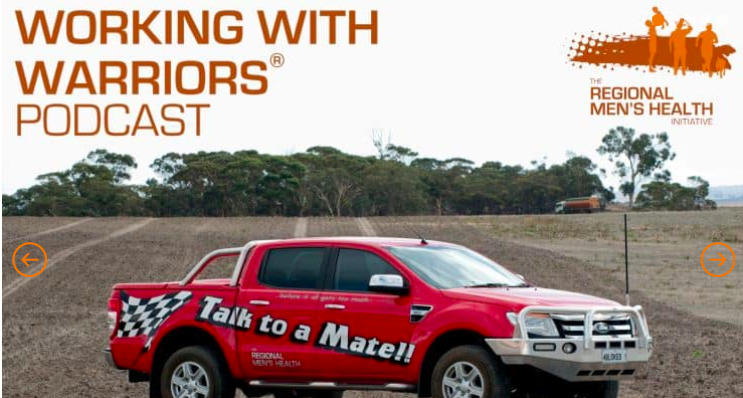 The authors point out that stoicism dates back to Roman philosophers Marcus Aurelius, Seneca and “the upwardly mobile slave, turned teacher Epictetus”.

Aside from being associated with keeping a stiff upper lip and soldiering on, stoicism embraced the acceptance of life’s challenges and understanding how perspective and beliefs can determine to what extent a person suffers when confronted with events that are beyond his or her control.

“These days the use of the word stoicism has incorrectly incorporated a “push on regardless” attitude by men in particular,” point out RMHI.

“It is used as a negative description for blokes failing to address ongoing health concerns by ignoring the warning signs and self-medicating by purely concentrating on their work.

“This is without a doubt a very dangerous attitude, but real stoicism needs to be celebrated.

“If we learn when to be stoic, and importantly, when to ask for help, our lives will benefit immeasurably.

"The Stoics of old, recognised that wellbeing depends on the cultivation of one’s character, on one’s choices and actions, rather than on what happens in the uncontrollable world around us. It is something that the Regional Men’s Health Initiative advocate every day.”

The most recent RMHI podcast released on August 7 provides wellbeing tips for men with a focus on physical health. “Blokes tend to not prioritise their health the way they do their vehicles on the farm. We should be valuing our health a bit more,” says Terry.