Male primary school teachers are an endangered species, according to a researcher from the School of Education at the University of Tasmania. Vaughan Cruickshank attributes the decline in numbers to fear and uncertainty around physical contact and expectations to take on masculine or gendered roles.

"The official stats are that 18 per cent of Australian primary teachers are male, but that number includes principals, PE specialists, etcetera," Dr Cruickshank told ABC News.

"So the actual percentage in the classroom would probably be about 15 per cent."

Cruickshank’s appraisal of the situation was backed up by anecdotal remarks made during ABC interviews with male teachers, who said it could be challenging to provide hands-on contact in their role - that would normally be given without question by female staff.

"If there is a parent who isn't keen on letting a guy handle their child — doing nappies and things like that — you have to let the females do that,” said Josh Cummings, 24, from Lismore.

"You have to be incredibly careful when it comes to comforting children, it's so easy for it to be misconstrued."

Dr Cruickshank said there was an expectation male teachers would be in charge of discipline and behaviour management within the school, as well as taking the pseudo role of father figure.

Everyone is always praising me for being a guy and they talk about how it's good to have a father figure around, I get that a fair bit," Mr Cummings said.

“People are seeing the limitations they've got within the job now, and the amount of work … now being put on teachers, and they think, 'I don't want to be involved in that'," Mr Phelps said.

They said that male teachers faced extinction in Australian primary schools by the year 2067 unless changes were made at policy level. 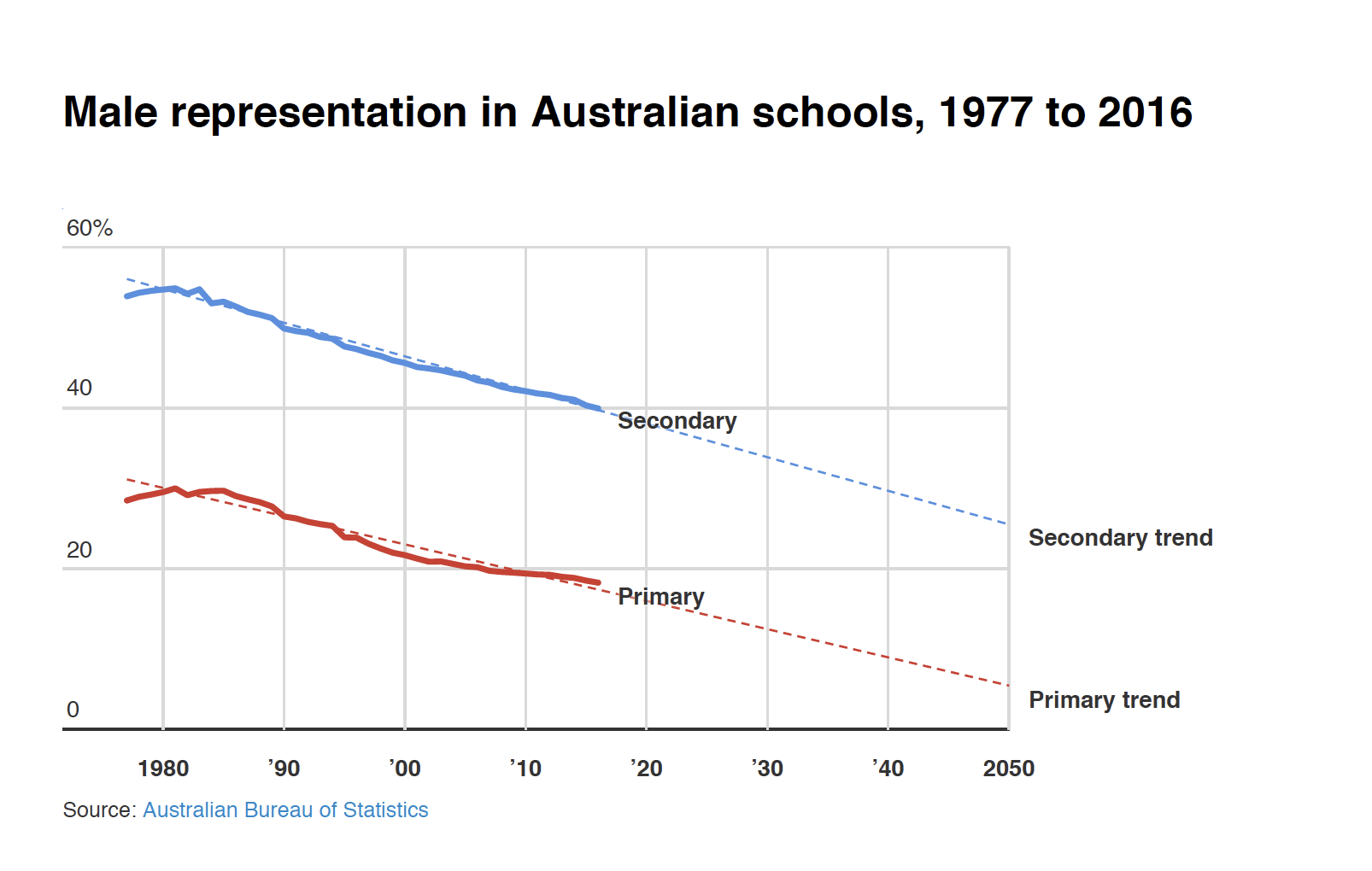 “There may also be a social stigma in advocating for more male teachers when women still face adversity in many other fields. In this way, policymakers may assume that declining male representation in schools is not a problem, or of less importance compared to other professions,” they wrote.

McGrath and Van Bergen said teacher gender had little effect on student achievement, but that there were "important social and psychological reasons for Australian schools to include more male teachers".

“Students themselves tell us that they want to be taught by both women and men. Just as some boys and girls find it easier to relate to female teachers, others find it easier to relate to male teachers. A teaching workforce that is diverse – in gender, ethnicity, religion, and sexual orientation – is most likely to appeal to diverse groups of students.

“The decline in male representation in schools also limits opportunities for students to observe men outside their families who are caring, nurturing, and concerned about education. This may lead students to assume that only women are suited for such work, or that such traits are atypical in men. Finally, for students with risky home lives, male representation may be particularly important. The presence of male and female teachers within the school environment allows students to see men and women interacting in positive, equal, and non-violent ways, and to observe men working with female leaders. In this way, male representation in schools may help to challenge misconceptions of what men can and cannot do."

Read: Male teachers are an endangered species (The Conversation)