Ten to Men report on social connectedness and Australian males

The latest report from the Ten to Men longitudinal study on male health has affirmed the importance of social connectedness to optimal health, wellbeing and longevity.

Limited social connectedness – which the report says is more common among Australian males than females – is associated with a variety of poorer mental and physical outcomes and risk behaviours, including depression, substance use, sleep problems and cardiovascular disease.

Using data from the first two 'waves'  of research in 2013/14 and 2015/16, the Ten to Men study sets out to describe social connectedness among adult Australian males.

It breaks the topic down to five key sub-groups:

A third Wave, undertaken during the second half of 2020, will examine social connectedness of males during COVID-19.

Half of them had between 5 and 15 close friends and 72.4% said the support most commonly available to them was having someone they could count on to listen when needing to talk.

“For example, approximately 4% had no close friends or relatives, a proportion that was fairly consistent across age groups. One-quarter of men experienced low levels of self-perceived social support, and 1%-2% were completely dissatisfied with their personal relationships.

“These findings support those of previous research showing that attachment relationships and indicators of community integration - such as being employed - can be crucial for developing and maintaining social networks and feelings of support.

“In turn, this can be beneficial for mental and physical health and wellbeing.”

The study showed there was a higher prevalence of living alone among men aged 45 and above, and lower rates of certain types of community integration, such as membership of sport or hobby clubs.

Those who conformed to traditional masculine norms of stoicism, self-reliance and avoidance of negative emotions, were less socially connected.

The study asked participants to list how many of 15 key life events they had experienced in the 12-month period. The most common was moving house, followed by difficulty finding a job and death of a close family member. 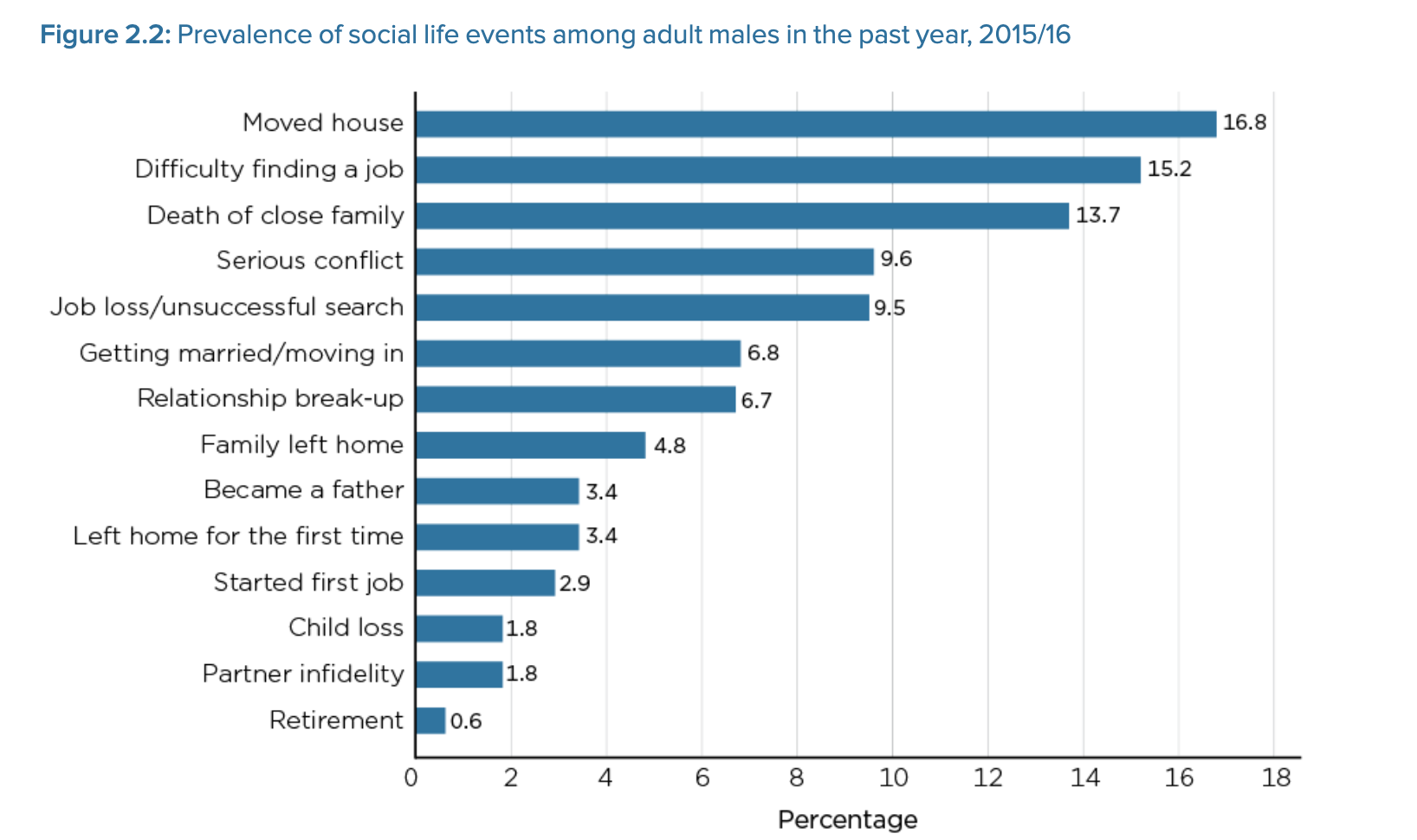 Over one-quarter (28%) of Australian males aged 18-60 had experienced two or more such events in the past year.

“Those who have difficulty finding work, men who experience conflict with a family member during midlife, or young men leaving home for the first time had the lowest levels of perceived support, on average.

“Knowing which events are associated with low self-perceived social support is important for informing when interventions can be needed.”

Noting that one in five Australian men will experience depression at some stage of their lives, the Ten to Men study examined the bi-directional relationship between self-perceived social support and depression among Aussies males.

They were more likely to have lower levels of self-perceived social support than those without difficult and disability, they had fewer close friends or relatives (8%) and unemployment rates were significantly higher, ranging from 38-67% depending on age.

Older men with functional difficulty may be particularly vulnerable to being socially disconnected.

“Research suggests that social connectedness among people with disability and difficulty can be enhanced when barriers to social inclusivity are addressed.”

“Research has shown that barriers exist to volunteering for CALD communities in Australia, including English language requirements, lack of time (especially to partake in volunteering activities outside local/CALD communities), and potential exploitation and racism (Cultural & Indigenous Research Centre Australia, 2016). 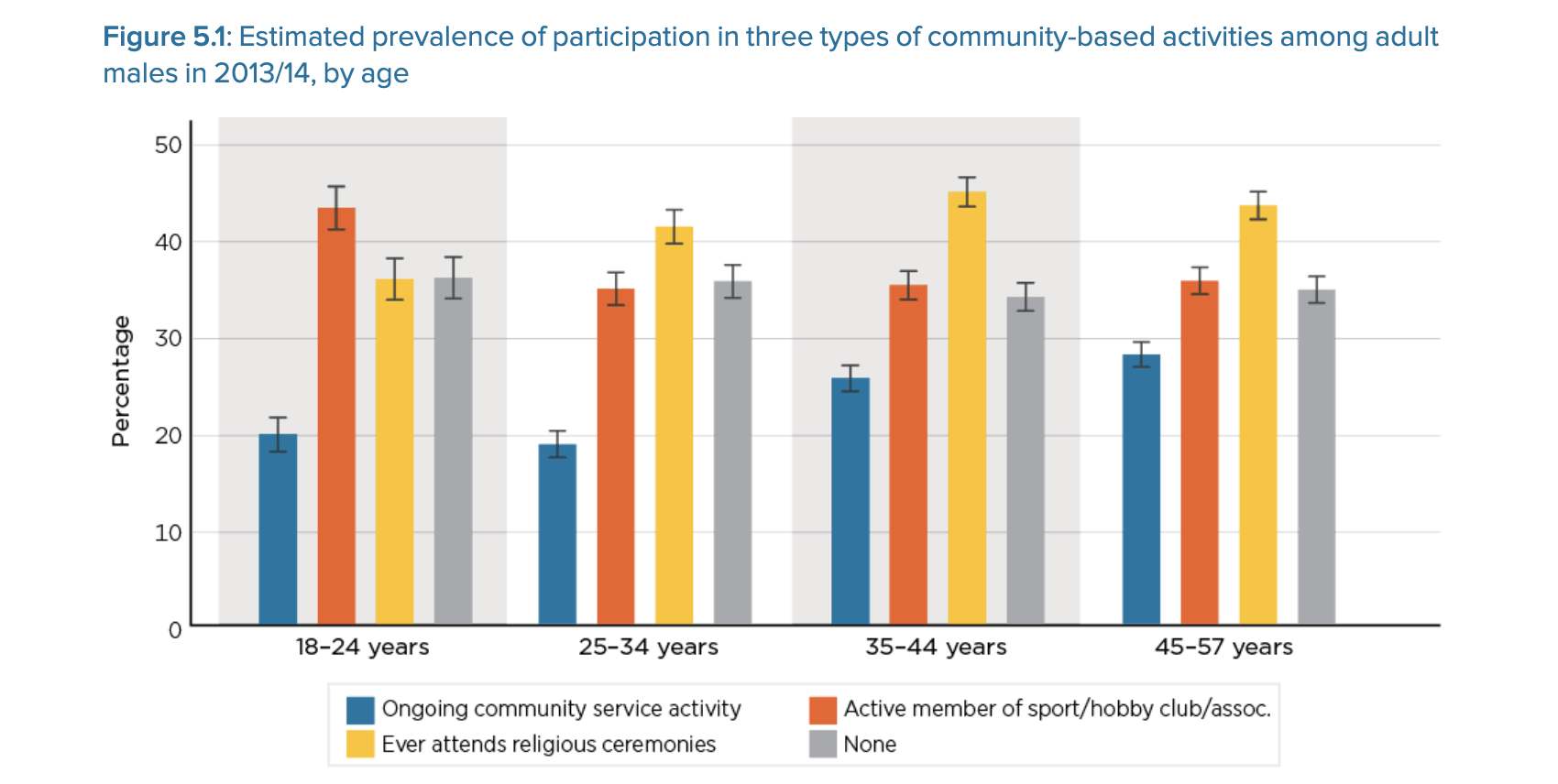 Finally, the Ten to Men study emphasised consistent findings that older men in the 18-60 aged group “appeared particularly vulnerable to being socially disconnected.”

“Providing opportunities for physical activity and other types of social engagement in accessible or incidental contexts is possibly an easily implementable policy solution to address low social connectedness among this group of men who are still of working age.”

One example of addressing this would be to introduce sports participation in workplace environments, which might also enhance social engagement among other subgroups of employed Australian males that might be less likely to take part in community-based activities, include those from CALD backgrounds.

The report highlighted the effectiveness of Men’s Sheds in fostering empowerment and a sense of belonging, a potential blueprint for maintaining social connections for a broader range of age groups. 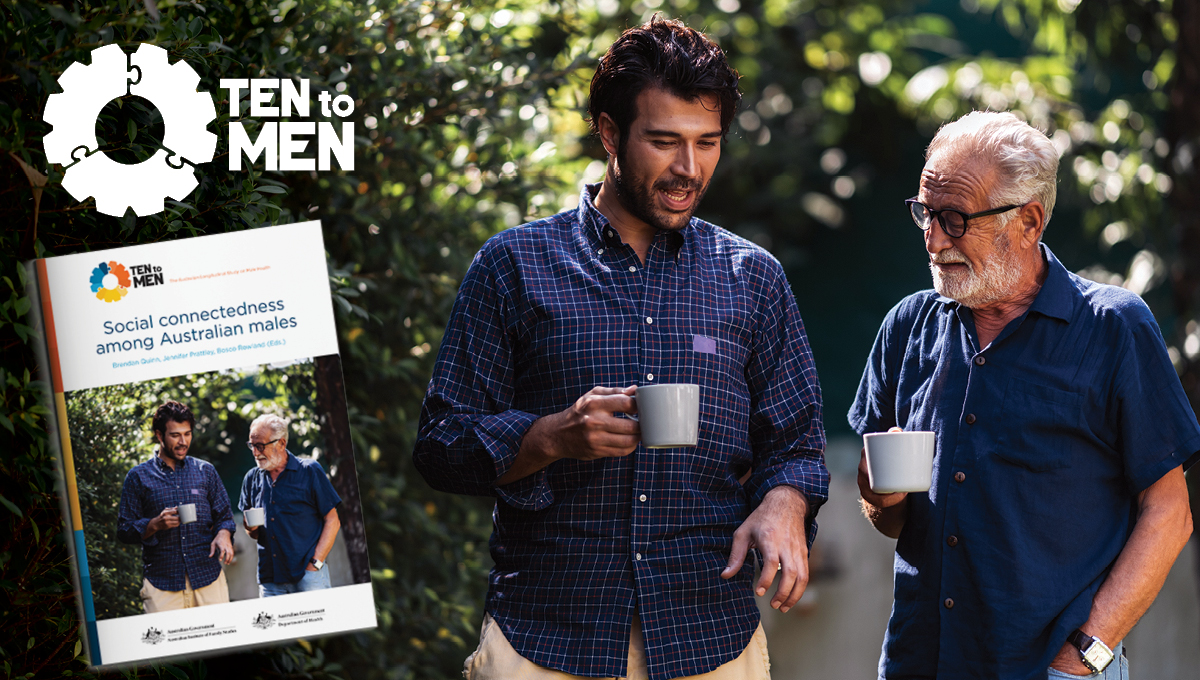 READ: Ten To Men Report on the Mental Health of Australian Males (AMHF)

READ: Ten to Men Weighs in on Male Obesity (AMHF)