Connecting through exercise: muscles that matter most

The Australian Men’s Health Forum presents the eighth instalment in our series on health initiatives that help men stay connected through exercise.

A physical disability altered Jo Milios’ girlhood dream of becoming a prima ballerina and set her on a career path towards men’s health work. Rather than join the corps de ballets, severe scoliosis in her spine led Jo to study physiotherapy in 1994, and become someone who helped dancers and sports people.

Ten years later Jo’s urologist brother asked for her help. “He said: ‘I am going to be working in prostate cancer and I need someone to help manage the men’s pelvic floor function because they all become incontinent and impotent,’” recounts Jo. “Those devasting effects on men can be assisted with pelvic floor training but we have never done it before,” he told her.

She joined him in 2005 and found there was a huge gap in prostate cancer support, so for the next 7-8 years Jo worked in the field and talked at urology conferences on how men were impacted by physical changes after their prostate cancer surgeries.

More research followed and a PhD on the subject in 2019. In between, she had the idea to develop PROST! - a community-based exercise program to support men through their prostate cancer journey.

She approached the local football club at Subiaco, who offered up their facilities free of charge to host a group of men with prostate cancer in an exercise program. 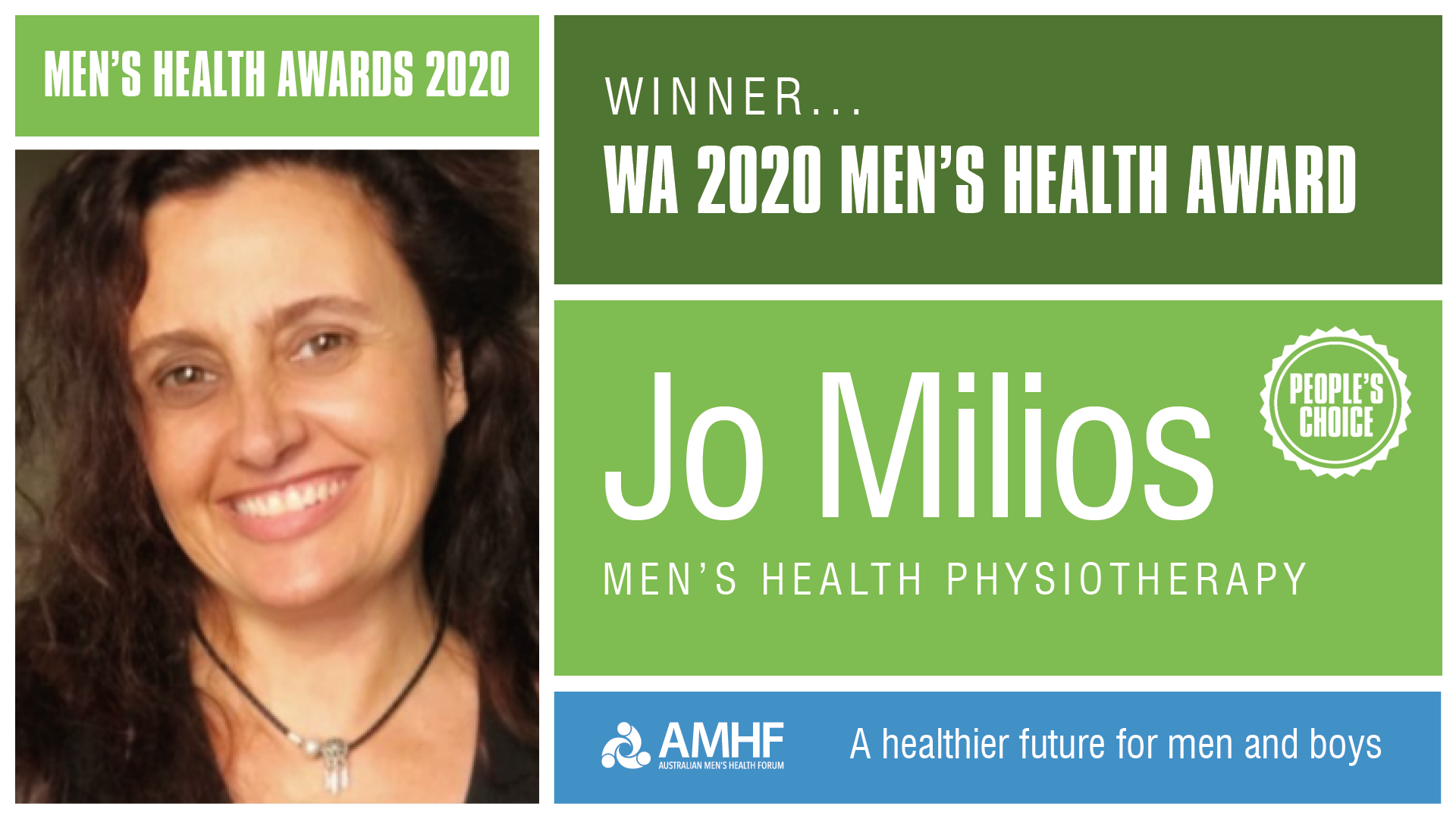 It became a not-for profit enterprise based on three principles: Muscle, Mateship and Mood.

A second location was established at the University of WA, and between them roughly 80 men now show up each week.

“I wanted to bring the men to a place where they would feel comfortable, in a relatively masculine environment,” says Jo. “There is nothing glamorous about the space, but they feel at ease and have a joint interest in football, which they can chat about as well as their cancer.”

“It’s confronting for these guys to be diagnosed with cancer in the first place,” says Jo.

“They are initially spun out. They had no signs of being unwell and did a blood test. There is a psychological shift. Being in the same location with other blokes in the same boat, normalises it. They know everyone is there for one reason. The conversation opens, ‘how are you going, are you having surgery, treatment?’ That is the most significant part of the program.”

While some guys leave as their health improves, others continue for the social connection, and take part in post-session coffee clubs and cycling meetups.

Exercises focus on general muscle conditioning as well as pelvic floor muscle strengthening, which helps with recovery before and after treatment.

It’s a muscle Jo believes males should be taught about from an early age.

“Most men don’t know they have a pelvic floor because they have never had to worry about it until confronted with a problem with the prostate or bladder,” she says.

“It’s an important, essential part of the anatomy for males to understand from 10 to 12 years of age.

“The pelvic floor is one of the other 600 muscles in their body they can control and strengthen.” Men also don’t understand that if they have changes to the bladder, are going to the toilet more, feel constipated, have reduced erectile function or pain in the penis and testicles … the pelvic floor is usually involved.

“It would be helpful if the pelvic floor was integrated into that base knowledge when they are learning about sexual health at school,” she says.

The members of PROST!

In 2021, Jo produced a PROST! video and training manual that costs $150 and can be integrated into programs run by exercise physiologists or physiotherapists. She is now getting orders across the world and has set up the toolkit as a non-commercial entity so that it is affordable for health practitioners to run.

In addition to PROST! Jo runs physiotherapy clinics in three locations across WA which, alongside her general treatments for the entire community, offers a specialist men’s health service treating prostate cancer-related challenges, and other male problems that affect the bladder, bowel, pelvis, or sexual function.

In addition, with sexologist and nurse Melissa Hadley Barrett, Jo hosts a weekly episode of the The Penis Project Podcast – now at its 75th episode (and soon to feature AMHF CEO Glen Poole).

The Penis Project Podcast has an impressive 50,000 subscribers and features interviews with specialists and regular blokes experiencing a range of health situations.

She remains an adjunct clinical researcher at the University of WA and is currently investigating the impact of radiation therapy on pelvic floor dysfunction, an area Jo says is not well measured or understood.

Her own favoured physical activity is walking her golden retriever Apollo each day and yoga, which she teaches four times a week. Some of those classes are tailored to males, who Jo says can be turned off regular group yoga sessions filled with women.

“They feel unfamiliar, they have poor flexibility and find it difficult to sit down and do some of the poses.” For this men’s health advocate and practitioner, having a flexible attitude has been the greatest move of all.