The new Global Dad Survey from Suit Tie Stroller has highlighted some positive side effects of the COVID-19 lockdown, with many dads saying they would like to continue being at home for their kids under flexible work arrangements.

The survey was instigated by Blake Woodward, who found that 60% of dads said they were ready to embrace flexible working on a more permanent basis, while only 3% of dads wanted to go back to the old way of doing things.

Blake, a change management consultant, spent four months in the US with his young family visiting relatives and unable to return when the coronavirus shut down the world.

“Covid 19 certainly had a strange impact on our lives,” he tells Parents at Work podcast host Fiona Hitchiner.

Blake, who started Suit Tie Stroller in 2016 after becoming a dad and wanting to understand what support services were available to new fathers, ran the survey to find out what dads were experiencing during COVID-19.

“Is this a trigger point for social and workplace change?” he asked.

His Global Dad Survey drew 321 responses from men in 25 different countries, 200 from Australia. A key focus of the survey was how dads were faring with flexible working arrangements and how they were coping with the mental strain of being locked down.

Were there aspects they wanted to take forward into the 'new norm'?

“Dads became more involved in domestic activities, it sparked a desire to continue being involved moving forward. It really seemed to hit dads at a deeper level."

85% of surveyed dads who lived with their kids experienced a closer bond and 65% were motivated to change how they wanted to care for their kids in the future.

74% of dads not living with their kids also experienced a closer bond. Some got to spend more time with their kids. Some had significantly less time. 83% were motivated to change how they wanted to care for their kids in the future. 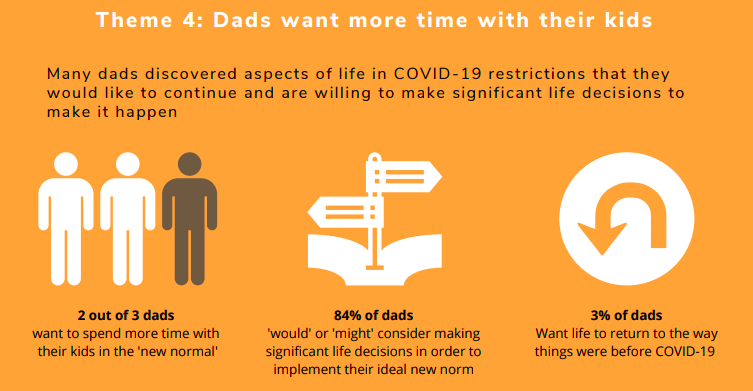 A multitude of dad types responded. “It wasn’t just dads with a wife and kid. Some were living separately, there were older dads, younger dads … a whole demographic of dads," said Blake.

A mere 3% of respondents wanted their lives to return exactly the way they were before COVID-19.

“84% were willing to take that a step further and actually consider making life changes to implement their new norm.

“60% of dads said they were ready to change employment conditions to embrace flexible working on a permanent basis moving forward.

“30% of dads were considering changing employment to achieve their new norm.

“What I’m seeing is hope for change. It needs a time of crisis to have a significant change in culture. This has been one of those massive disruptors. Employees have experienced a new way of working. Never have we had a whole workforce working flexibly like this at the same time.

“There’s a huge proportion of dads who want to keep working flexibly.”

Blake says he wants dads to know that they are not alone in wanting more time to be with their kids. 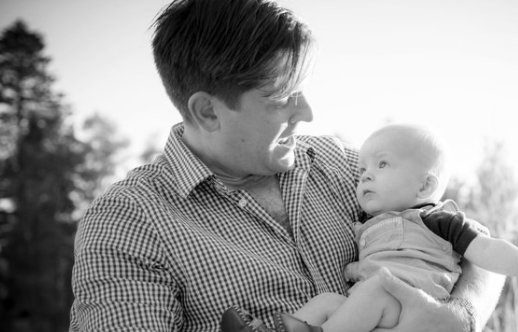 Hands-on: Blake Edwards with his son

Some were working extra hours, some workplaces demanded more from them, some founded it hard juggling work responsibilities with having kids at home and helping with online schooling.

On average, 41% of dads worked more hours per week during COVID-19, 21% were working fewer hours, and 7% of  respondents were unemployed.

Blake said he hoped dads would read the report and know that others felt the same way as they did. “One of my core values is to empower dads to be the dad they want to be,” he said.

About the Global Dad Survey:

The survey is accompanied with a list of considerations and opportunities for employers as well as a framework for change, directed at dads.

Listen to the Parents at Work podcast

CHECK OUT THE DAD FILES