Counting the ways AMHF counts in a turbulent year

A quick look back at the past 12 months is a surreal exercise. The summer bushfires that ravaged Australia and destroyed rare habitats; the global COVID-19 pandemic that shut down the world; the rationing of toilet paper supplies by major supermarkets; the shooting of George Floyd on May 25 that compounded racial tensions and popularised the Black Lives Matter movement; the US presidential elections; the AFL Grand Final held in Queensland … it was a year that kept on giving in unexpected, and often tragic ways.

Meanwhile, the Australian Men’s Health Forum’s standing as the peak body for men’s health gained heightened relevance. Health and wellbeing outcomes for men and boys remained much worse than for women across key areas such as heart disease, death by suicide, death by transport and accidental death and injury. In addition, men were found to be more at risk with COVID-19, experiencing higher rates of mortality.

Read: Why COVID-19 is hitting men harder than women (Healthline)

And while women had lost more work in the first phase of the recession, Melbourne Labor frontbencher Clare O’Neil predicted male unemployment would surpass women’s economic hardship. “There is a tsunami coming for workers in predominantly male industries,” she told the McKell Institute in November.

In a year of challenges, AMHF ensured it kept male health firmly on the agenda.

As the year winds down (or up, depending on your point of view) we reflect on an extraordinary time in history, and revisit a dozen major AMHF 2020 initiatives that underpinned the organisation’s on-going quest to improve the health and lives of men and boys:

As men’s groups addressed the challenges of taking services online in the first quarter, AMHF ran a survey to ascertain the impact of COVID-19 on organisations, staff, volunteers and various facets of the men’s health sector. Read: Men’s health initiatives scale back in the face of the coronavirus. The results of the survey and a discussion on how men’s health services were being impacted by the virus was held in April at AMHF’s first zoom webinar.

The Men’s Health Connected online summit replaced the 25th Men’s Health Gathering that was to have taken place in Melbourne in May. The free five-week summit ran throughout June bringing together leading voices in men’s health to discuss a range of high profile topics, inviting diverse opinions across the sector. 1500 people signed up to take part in Men’s Health Connected, 150 speakers shared their expertise and more than 75 men’s health organisations were involved in 50+ sessions. 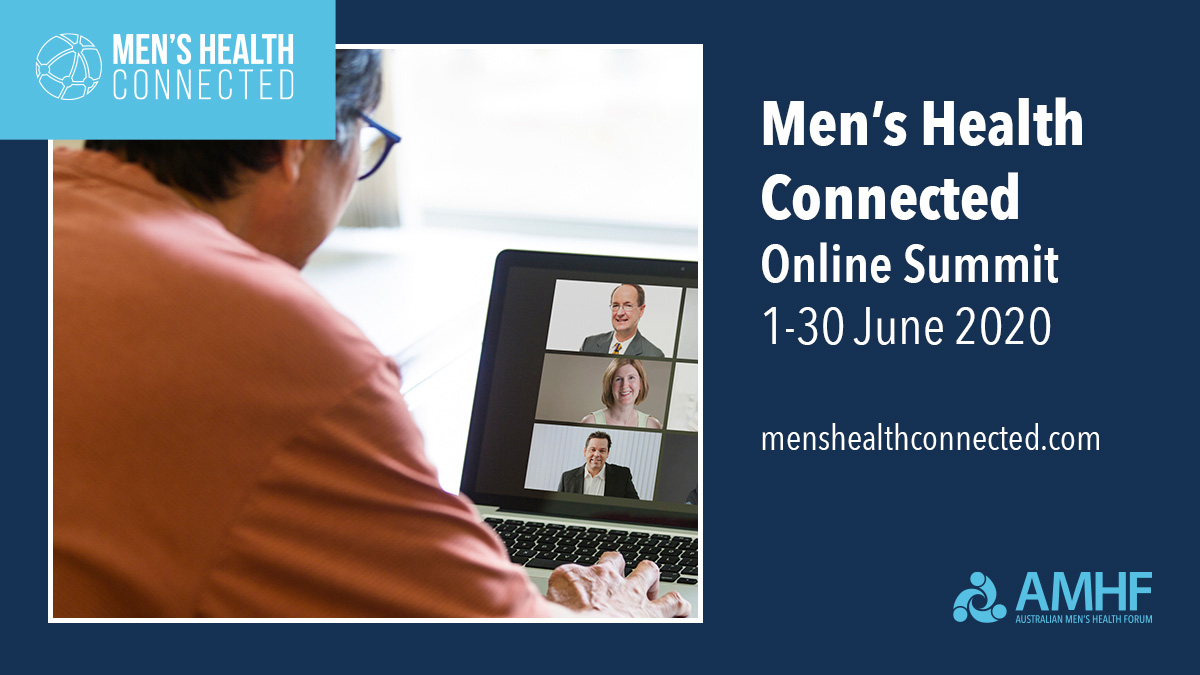 Coinciding with Men’s Health Connected was Men’s Health Week from 15 June. AMHF launched a new Men's Health TV Facebook channel to deliver a series of public-facing ‘shows’ including Blokes on the Couch and Blokes Healthy Lunchbox along with the evening program, a Men’s Circle Meet-Up. 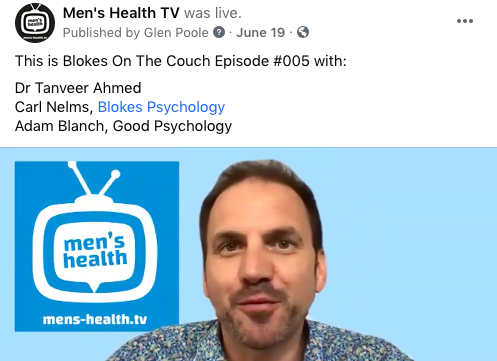 The AMHF National Men’s Health Awards were announced during Men’s Health Week and more than 5000 people across Australia took part in voting for      their favourite candidates over five new categories including the Significant Response to COVID-19 Award, won by Parents Beyond Breakup.

September was a time to Celebrate Dads ahead of Father’s Day and this year we developed a series of articles championing the work done by The Father Hood; Man with a Pram; The Fathering Project: Barwon Health; Movember; Professor Philip Morgan; Professor Richard Fletcher and Healthy Male.

6. Making the case for a male suicide prevention strategy

AMHF initiated its campaign for a national Male Suicide Prevention strategy on World Suicide Prevention Day with a new report: Giving Men a Hand: the case for a male suicide prevention strategy. Six key areas from the report were amplified via a series of infographics across social media channels such as ‘The 5 Social Factors That Shape Male Suicide’ ‘5 Actions to Prevent Male Suicide’ and ‘5 key barriers to preventing male suicide.’ These can all be downloaded here.

AMHF sought feedback on the Government’s new Preventative Health Strategy with a survey and a series of graphics to highlight the differences in male and female health outcomes in Australia. Turning its gaze to preventable deaths and injuries, AMHF released its second major report for the year: Accidental Heroes: Making death by injury a men’s health issue.

8. The 10 Habits of Mentally Healthy Men

AMHF highlighted Mental Health Day on October 10 by asking men to contribute to the 10 Habits of Mentally Healthy Men. Each habit was published with an accompanying article fleshing out the theme and pointing readers to supporting resources.

Resources are the name of the game for International Men’s Day on 19 November, a significant date in the men’s health calendar and one that AMHF once again took a special role in promoting through the website it hosts, info. In 2020, a record number of events marked the day in every State and Territory across the country. A number of politicians, officials and celebrities got involved … even the long-running hit TV series Neighbours screened a special International Men’s Day episode.

As well as asking 20 Big Questions About Men and Masculinity, AMHF equipped anybody who asked for it with The Know Your Man Facts An evolving resource that can be adapted to any situation, #knowyourmanfacts takes a male-friendly approach to sharing information. It is for blokes, about blokes and intended to be delivered by blokes!

Released in November, AMHF’s 10-step guide to developing male friendly health services identifies the key characteristics that are common to health initiatives that work for men, both in Australia and overseas. It is the first publication of its kind and will benefit anyone who is committed to improving the lives and health of men and boys with a set of tried and tested principles that can be applied universally to a general population of men as well as being tailored to the diverse needs and preferences of different populations across Australia.

Finally, the Save Aussie Men campaign in December called on people to send a Message of Support to the Government, requesting more be done to tackle male suicide head on. The campaign continues, so too AMHF’s resolve to eradicate the blind spot around suicide prevention in Australia.

Save Aussie Men: Send A Message to the Morrison Government calling for more action to tackle male suicide.