Meet James Smith, a program coordinator for the Moree Aboriginal Fathers’ Program, which supports the needs of Aboriginal fathers and their extended families.

The program works closely with Aboriginal dads to provide information and workshops on parenting, child development, and health programs and to develop local support networks.

Moree is 623k by road north of Sydney, where the University of Newcastle partnered with the Young and Well Co-operative Research Centre in 2015 to produce the ‘Stayin’ On Track’ program and website to provide support to young Aboriginal men as they transition into fatherhood.

The stories of young Aboriginal dads were uploaded to the Stayin’ On Track website, to create positive images of being a young Indigenous father. James Smith helped develop the program from its early start. 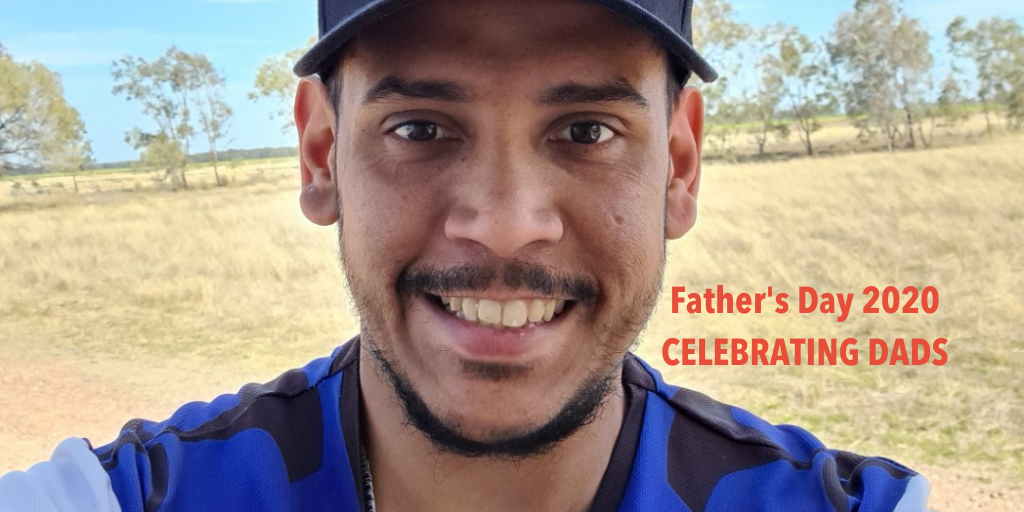 This is his story.

“Being a father’s program coordinator is something that I like doing, I don’t really look at it as a job.  It’s just something that I have a passion for and getting paid for it is a bonus, really.

“I run two fathers’ groups one in Moree, that has a population of about 7,000 and one in Mungindi, that has about 600. Moree is about 650 km from Sydney and Mungindi is another 120 further on. The Aboriginal populations in both is about 20%.

“Our target group is dads that have kids between 0-6 and I get dads along by just getting out in the community and talking to a lot of dads about my program to see if they are interested. It’s based in Miyay Birray Youth Service in Moree.

“Before coronavirus there’d be 15 coming to the groups but now that sort of dropped off a bit. Last Wednesday I had six dads come down, we had a couple of pizzas. We watched the fight with Tim Tszyu and then between fights we were talking about what they’d like to see on a website for Aboriginal dads.

“We had a couple of pizzas but we also talked about our website and all that stuff, stuff they thought might be good for the website as well. It wasn’t until we’d talked about it that they realised that there’s no websites for Aboriginal men. That came as a bit of a shock.

“They also give me a ring or if they needed support with anything and I’d just out and see them and have a yarn or go down the river. We just have a yarn in general and sort of go off topic a bit and sometimes into personal stuff.  It’s created a safe space for dads to come and talk.

“So part of my job role is to get service providers to come in and talk about what services they can provide for my dads. So we’ve done like drug and alcohol sessions, suicide prevention sessions, mental health. We’ve also done nutritional sessions, we’ve done like mini health checks.  And sometimes we’ll do days in the park for the kids and stuff like that.

“We also talk about us being Aboriginal dads. I started off one time, I said ‘well what are some of the stereotypes that we have on Aboriginal men, Aboriginal fathers?’ And they come up with ‘lazy, drunks, not around’.  One of them said ‘sperm donors and woman bashers’.

“And then I said ‘well, what’s one thing Aboriginal dads actually are?’, and they said ‘carers, providers, protectors, teachers’. The first thing they said was deadly, 100%.  So we want to make a poster around those positive and negatives that we came up with, more positives than negatives.

“It’s about learning. I’m only a new dad myself, my daughter’s only 5.  Some of the guys have kids that are 20 but they have kids right down to 2, so especially when guys are like having problems with their kids or missus and stuff like that, and then some of the dads go ‘well this is what I’ve done’ and I’ll go ‘oh yeah, that could work hey. Never thought of that’.

“Being a fathers’ program coordinator is something that I like doing, I don’t really look at it as a job.  It’s just something that I have a passion for and getting paid for it is a bonus, really.”

Check out www.sms4dads.com to receive information on the go for new dads.

CHECK OUT THE DAD FILES ON AMHF

What a difference a dad makes

How COVID-19 has changed fathering forever